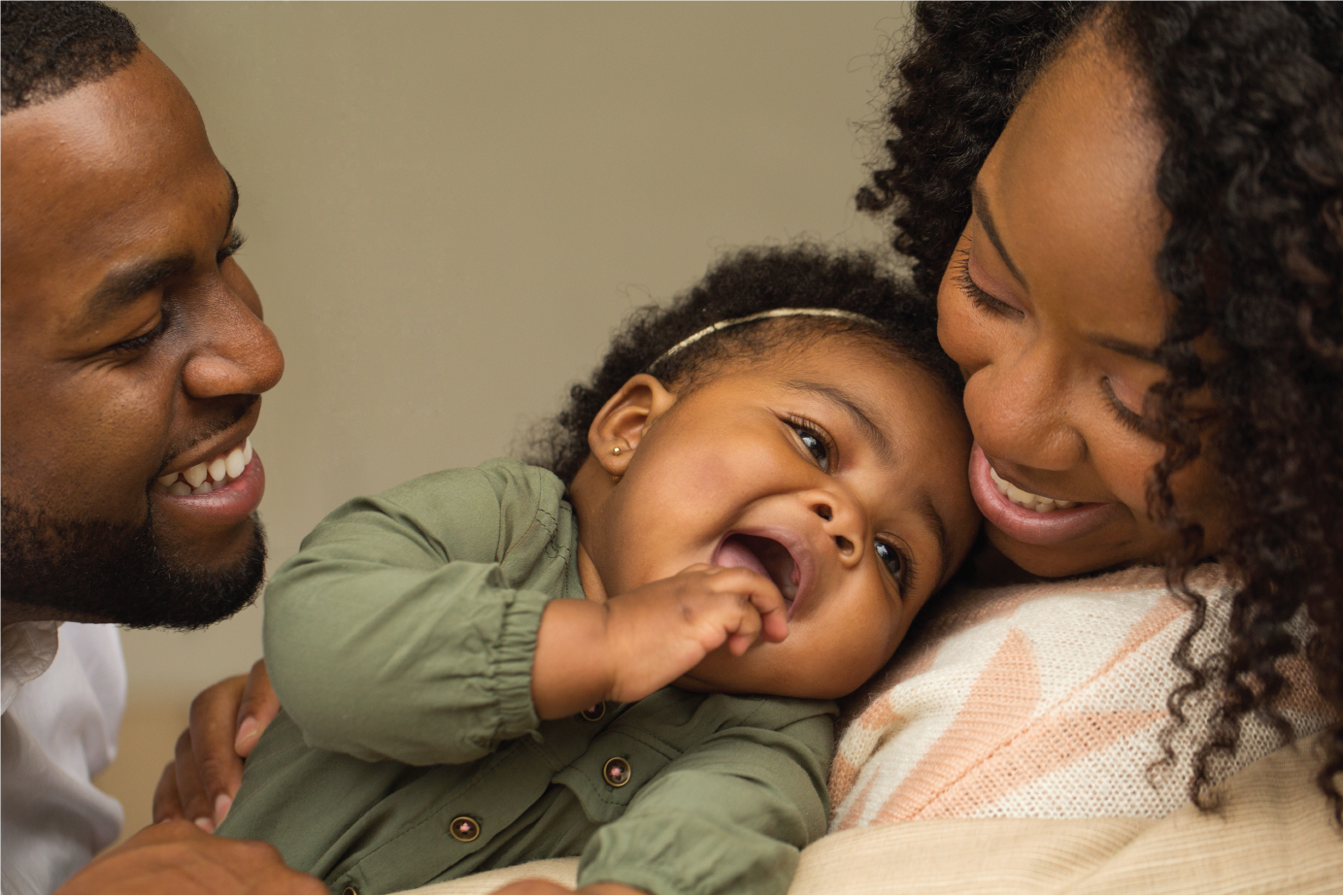 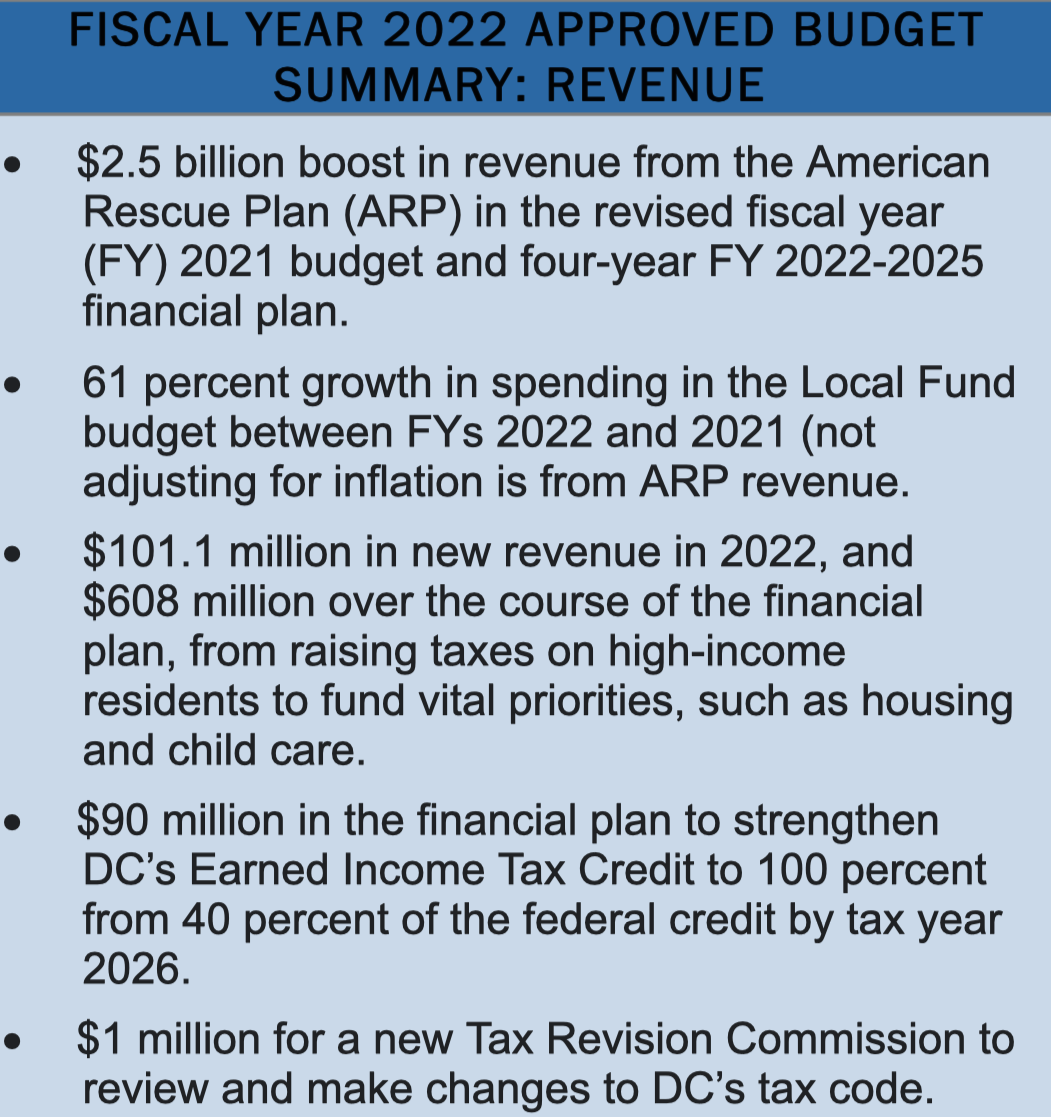 DC lawmakers approved a fiscal year (FY) 2022 budget that makes great strides towards repairing the racially disparate harm of the pandemic and building a more equitable future. Demand for public services increased sharply in the pandemic, as tens of thousands of residents fell behind on rent, faced unprecedented health care needs, and struggled to keep their businesses afloat. The health and economic crises exacerbated already widening racial inequities put in place by centuries of policies and practices that disadvantaged residents of color and privileged white residents in employment, education, and wealth-building opportunities. Because of that history, Black and brown DC residents bore the brunt of the pandemic’s harm in terms of both job loss and job-related exposure to the COVID-19 virus, contracting the virus, and death, while white residents largely kept their jobs and remained relatively protected.[1]

DC policymakers met the urgency of the moment. They leveraged nearly $2.5 billion in American Rescue Plan (ARP) dollars in the financial plan to offset pandemic-driven revenue losses and to strengthen investments in education, equitable economic development, and other crucial lifelines for residents struggling to make ends meet. [2] In addition, the DC Council raised income taxes on the city’s wealthiest residents to fund ongoing, transformative investments in cash for workers earning low wages, raises for early educators, and housing for residents who are homeless or on the verge of homelessness. The tax increase made DC’s tax system more equitable by asking for more from the richest, predominantly white, households who have typically paid less in local taxes as a share of their income than the bottom 80 percent combined.[3]

DC Budget Put $2.5 Billion in Federal Dollars to Work to Address the Harms of the Pandemic

The ARP enabled District policymakers to better respond to the heightened health and economic needs of residents due to the pandemic and its fallout. The District’s revised FY 2021 budget and the approved FY 2022-2025 financial plan relies on nearly $2.5 billion in federal relief revenues to support programs and services across a variety of areas, including public health, education equity, child care supports, affordable housing, relief for small businesses, and more. Notably, the budget delivered cash relief to thousands of workers who were excluded from federal aid, ensured that every school had the funds for a mental health clinician, dedicated historic levels of funding to affordable housing production, and expanded paid family leave, among other gains.

The financial plan will spend more than $1 billion in FY 2022, with the amounts reducing each year through FY 2024, when the District must spend most of the ARP funds.

The DC Council approved tax changes in the FY 2022 budget that make DC’s tax code more progressive, requiring high-income residents to pay more of their fair share in taxes. The Income Tax Fairness Amendment Act (hereafter referred to the tax plan) raised DC personal income taxes on residents with annual taxable incomes above $250,000, generating $101.1 million in FY 2022 and $608 million across the four-year financial plan.[4] The tax plan changed the income brackets within the personal income tax and modestly raised tax rates at the top. Specifically, it narrowed the income range in DC’s fourth tax bracket, created two new high-income brackets starting at $250,000 and $500,000 taxable income, and raised tax rates by .75 to 1.8 percentage points in the top three brackets (Table 1). These improvements to the tax code go into effect January 2022 and are permanent. 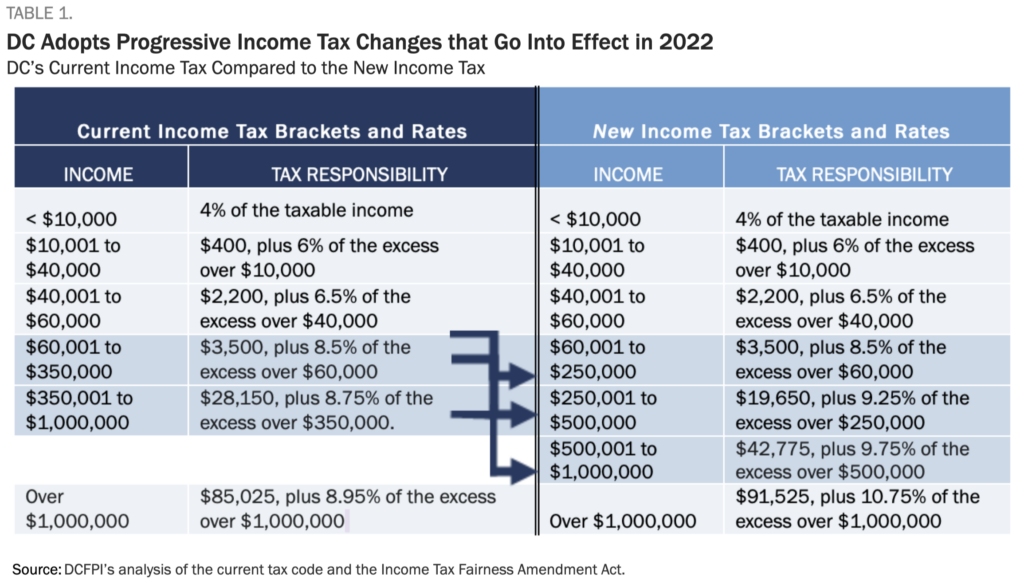 The tax plan is well-targeted and modest. It raises taxes on four percent of DC taxpayers, all of whom earn more than $250,000 in annual taxable income, and residents earning $1 million or more will pay 90 percent of the tax increase.[5] Couples who file separately on the same return could earn up to $500,000 before they see an increase in what they owe.  For someone who makes $260,000, the tax increase means an extra $50 per year. And, for a taxpayer earning half-a-million dollars, the plan means a $1,250 annual tax increase, or about $100 per month.

Black and brown residents, and particularly women, will benefit the most from these major investments. A majority of early educators are Black and brown women, more than eight in ten residents who are homeless in DC are Black, and seven in ten of eligible EITC recipients in DC are Black.[7] Wealthy white residents, on the other hand, will pay the majority of the tax increase given that they make up approximately two-thirds of taxpayers at the top of the income distribution.[8] Together, the budget and tax plan will help those struggling to get by thrive, advance racial equity, and provide a boost to our economy.

The FY 2022 budget positions DC’s EITC—a refundable tax credit for workers paid low wages—as the most generous in the nation and the first to be delivered monthly, rather than as a lump sum payment. The DC EITC builds on the successes of the federal credit, by helping workers afford basic needs, reducing poverty, and helping adults and children thrive in the long run through improved health and education outcomes and other benefits. Because DC’s EITC is refundable, if the credit exceeds taxes owed, then the worker receives a cash payment for the difference. This puts money directly into workers’ pockets to help them pay bills, care for their children, and possibly save for a rainy day, providing these residents greater economic stability. Those dollars also flow directly into DC’s businesses as people use them to make ends meet.

The FY 2022 budget also changed how families and individuals receive their EITC refunds. Rather than receiving a lump sum payment at tax time, many residents will receive their refund in the form of monthly payments spread across the following year. The budget also funds outreach efforts to boost participation rates and give workers advanced notice that their payments will be delayed.

The tax plan will help correct a major flaw within the current tax code, where the bottom 80 percent of taxpayers have been paying more in DC taxes as a share of their income than the richest 20 percent. Going forward, this injustice will be flipped on its head: the top 20 percent will now pay slightly more than the bottom 80 percent combined (Figure 1).[10] The infusion of cash from strengthening the DC EITC alone will lead to a significant drop in tax responsibility levels for those with very low incomes.[11] 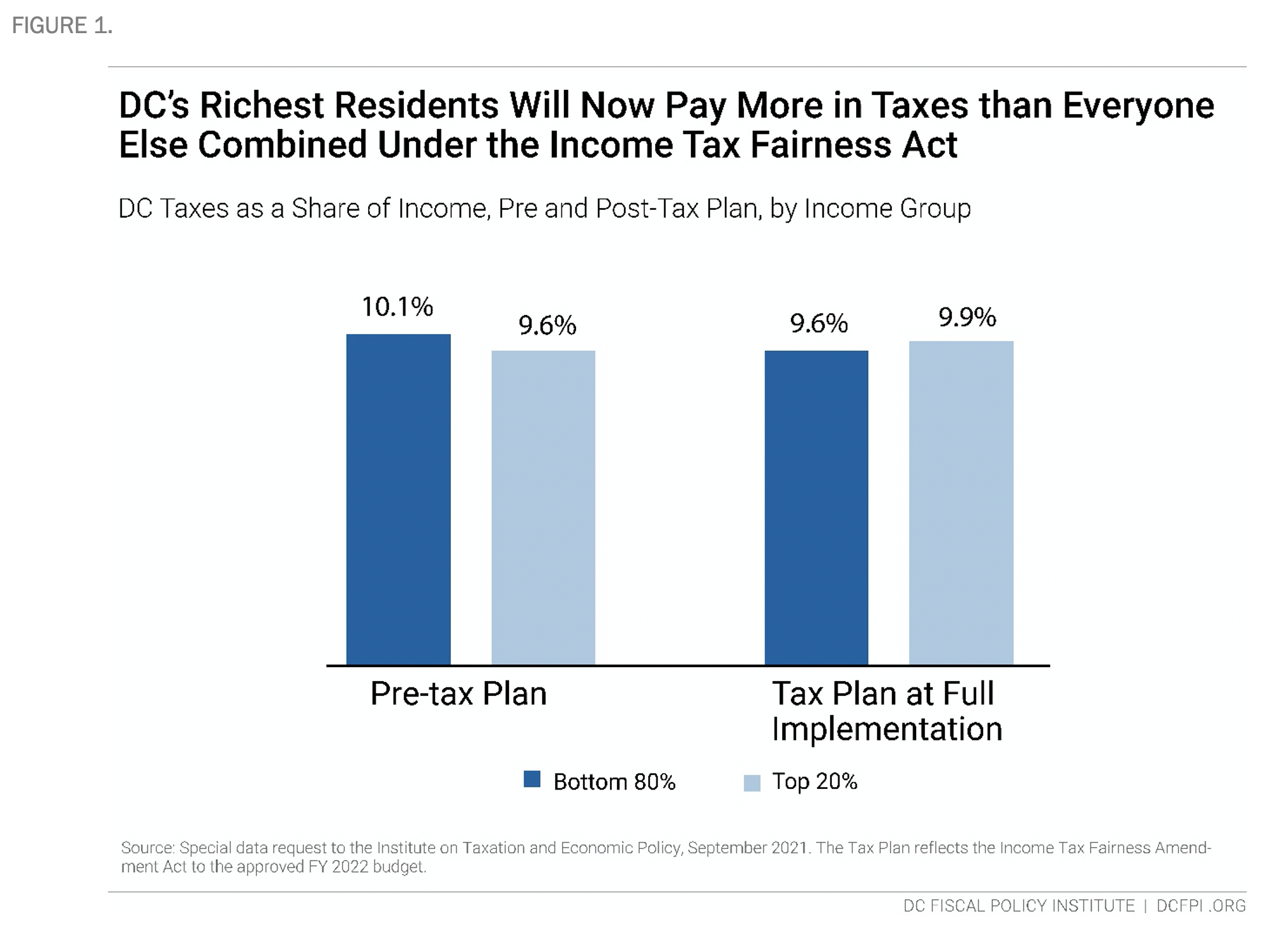 To make the tax code truly progressive, lawmakers will have to make further improvements given that the richest residents will continue to pay less in DC taxes as a share of their income than middle-income residents.[12] The budget includes $1 million for a Tax Revision Commission whose task is to provide the DC Council with policy recommendations to make the tax code fairer and more equitable, and this body should take aim at fixing this remaining inequity, among others that continue to exist.

Outside of the tax plan, the budget also cuts taxes for some workers who are unemployed by exempting unemployment benefits from the DC income tax beginning in tax year 2021. (The taxes would still be taxable at the federal level.) This program will reduce revenues by $21.9 million in FY 2022 given the spike in unemployment that occurred last year, but the program cost drops to $2.2 million each year thereafter as employment levels are expected to stabilize. The budget also excluded from income taxes the direct cash aid that workers excluded from traditional unemployment receive from the DC government.

As revenues and the local economy rebound, DC lawmakers must continue to seize opportunities to make the bold investments necessary to further address long-standing racial inequities. This means ensuring that the District continues to take bold steps to advance racial justice in the tax code, including addressing injustices and inefficiencies in property taxes, corporate business taxes, and tax giveaways. A long-term investment plan centered on racial equity can help build a better future and create a more inclusive and resilient DC.

[2] DC is receiving more than $3 billion in federal ARPA funds, but some of the funding does not show in the budget tables, meaning it may not flow through the financial plan.

[6] Office of the Budget Director, Fiscal Impact Statement for the Income Tax Fairness Amendment Act, Council of the District of Columbia, July 20, 2021.

[8] Special data request to the Institute on Taxation and Economic Policy in 2021, using income distributional data from 2019 (the latest available on data for race in their model).

[9] Working people without qualifying children and with very low incomes can also claim a credit worth 100 percent of the federal credit, which is smaller than for families and under federal relief measures tops out at about $1,500.

[10] Special data request to the Institute on Taxation and Economic Policy, September 2021. This is an update to the 6th edition of the 2018 Who Pays? analysis.

[11] Ibid. DC residents with incomes under $24,000 per year, or those the bottom 20 percent of the income distribution, will see their share of income going towards DC taxes plummet by 4.4 percentage points, to 2.4 percent from 6.8 percent.

[12] Special data request to the Institute on Taxation and Economic Policy, September 2021.