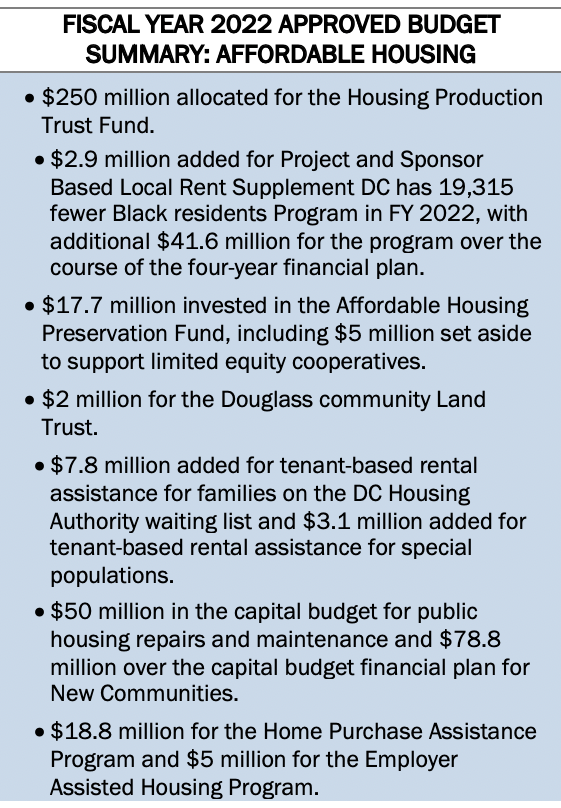 Affordable housing programs in DC received a dramatic increase in investment in fiscal year (FY) 2022, largely due to significant funding from the American Rescue Plan (ARP) and a modest but well-targeted tax increase on high-income residents to support rental assistance. These additional resources enabled the District to increase funding for traditional affordable housing programs while also making innovative investments in anti-displacement strategies, such as the Douglass Community Land Trust. As District residents, particularly those with low incomes and Black and brown communities, continue to grapple with the economic harm of the pandemic and an increasingly unequal economy, investing deeply and strategically in affordable housing is a step in the right direction toward housing equity and preventing displacement.

DC, a historically Black city, has seen a steady decline in its Black population. Recently released 2020 census data show that DC has 19,315 fewer Black residents, a 6.3 percent decrease, compared to the previous decade, even as the overall population of the District grew by 13 percent. As a result, DC is now estimated to be 40.9 percent Black, a dramatic decrease from when the Black population made up 50 percent of the District’s residents in 2010.[1] The region’s increasing lack of affordable housing exacerbates this trend.

The large influx of federal and local dollars in this year’s budget will support historic investments in both housing production and preservation and ongoing subsidies like the Local Rent Supplement Program. To ensure that these affordable housing investments contribute to a more economically and racially just city and prevent further displacement of Black residents, lawmakers must prioritize the production and preservation of long-term, deeply affordable housing and transparency and accountability for its housing programs. [2]

An infusion of federal dollars through the ARP allowed the District to massively increase funding for the Housing Production Trust Fund (HPTF),

As of 2020, the DC law requires that 50 percent of HPTF funds each year support housing for residents with extremely low incomes, meaning households earning between zero and 30 percent of the DC area median family income, or those with incomes up to $38,700 for a family of four. Prior to 2014, the requirement was 40 percent. Since the District instituted the statutory requirement, the Department of Housing and Community Development (DHCD) has met the goal just once, though preliminary estimates show that they will make a slight improvement towards the goal in FY 2021 (Figure 1). DHCD has not met the statutory targets largely due to insufficient funding for the Project and Sponsor Based Local Rent Supplement Program (PS LRSP). PS LRSP provides participating developers with ongoing operating subsidies that are critical to keeping rents low so residents with extremely low incomes can benefit.

The approved FY 2022 budget includes $2.9 million in PS LRSP and $41.6 million in additional dollars for the program over the course of the remainder of the financial plan, for a total of $44.5 million over four years (Table 1). The $2.9 million available in FY 2022 will go to developments that are complete and have already received HPTF funding in FY 2020 and before. Developments funded through the HPTF in FY 2022 will receive PS LRSP funding in future fiscal years once those projects reach completion.

Historically, DHCD designated PS LRSP funding for housing developments when those projects received funding through the HPTF. However, because the funds need to be available upon completion, DHCD will now allocate PS LRSP funding in the fiscal year that a housing development is completed and ready to be occupied, a change that is reflected in the Budget Support Act (BSA). Additionally, DHCD will now make incremental increases to the program based on an estimate of the funding level needed to meet the HPTF’s statutory affordability requirements. This budgeting change could lead to much-needed improvements to the program’s efficacy. However, there are no consequences if the agency fails to meet affordability targets.

HPTF Transparency Amendment Act of 2019. This legislation, had it passed, would have required public justification of decisions made during the consolidated Request for Proposals selection process and would give lawmakers and the public information essential to holding DHCD accountable to its affordability goals.

The budget includes a dramatic increase in funding for the Affordable Housing Preservation Fund, which uses public dollars to leverage private funds in a 3-to-1 match for acquisition and pre-development financing to preserve, acquire, and rehabilitate DC’s affordable housing stock. The FY 2022 allocation for this fund is made up of $17.2 million from the ARP and $494,000 in local and other federal funding, for a total of $17.7 million. This investment is more than eight times the size of the nearly $2.1 million allocation in FY 2021. And, for the first time, the Preservation Fund includes a $5 million set-aside for limited equity cooperatives (LECs), which are formed when tenant associations collectively purchase their building through DC’s Tenant Opportunity to Purchase Act. LECs face unique funding challenges and advocates have long pushed for the District to set aside funding to support the creation and long-term stability of these co-ops, which preserve long-term housing affordability.

Funding from the ARP also allowed the District, for the first time, to designate $2 million to support the Douglass Community Land Trust (DCLT). Community land trusts are nonprofit organizations that allow for community control and stewardship of land and development on that land. The DCLT is an independent, non-governmental, organization that was incorporated in 2019 as part of a broader initiative to support equitable development and build Black wealth east of the Anacostia River. 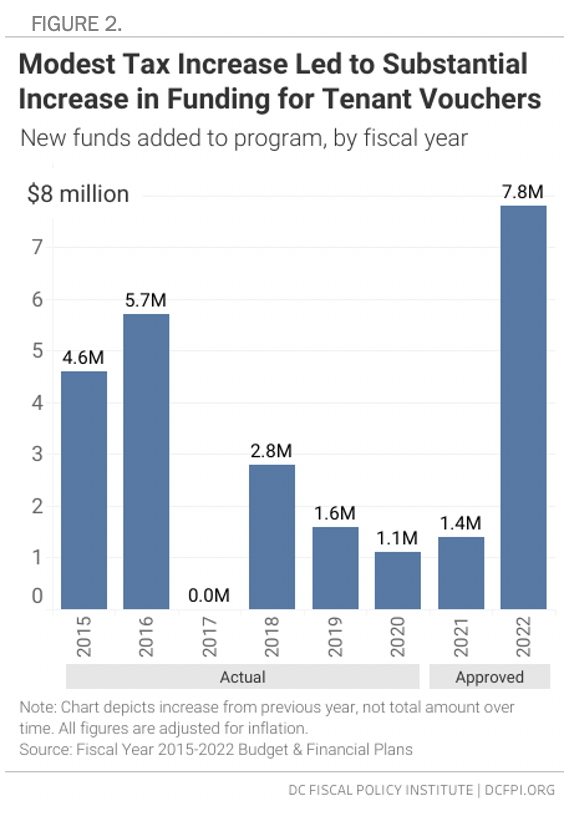 The DC Council’s modest tax increase on DC’s highest income residents enabled the city to make a historic investment in rental assistance. The approved budget includes $7.8 million in new funds for rental assistance for 310 families on the DC Housing Authority (DCHA) waiting list through the tenant-based voucher component of DC’s Local Rent Supplement Program (LRSP). The Department of Human Services will manage these funds in a new Rent Supplement Program Tenant-Based Allocation Fund for greater transparency and efficiency. While this investment is short of the $17.3 million that DCFPI and its partners had called for, it is the largest single increase to tenant-based vouchers for families in need in at least eight years (Figure 2). More than 43,000 households are on one or more DCHA waiting lists for housing assistance, so the District should continue to prioritize rental assistance going forward.

The approved budget also allocates $1.5 million in federal ARP dollars to the Office of Victim Services and Justice Grants (OVSJG). These dollars support Eviction Diversion Coordination to reduce eviction filings against tenants by coordinating access to dispute resolution resources such as legal services, mediation, social services, and emergency financial assistance. This supplements additional District support for civil legal services funded in the OVSJG’s Access to Justice program. Additionally, $511,680 in federal emergency rental assistance was used to support seven new and existing employees within the Office of the Tenant Advocate (OTA) in the FY 2021 supplemental budget given the likely surge in demand for legal assistance and representation. The FY 2022 budget also provides OTA with four additional staff working for OTA’s Legal Representation program in FY 2022. 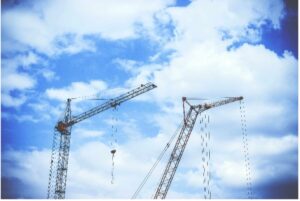 In the FY 2022 budget, policymakers approved for the second consecutive year $50 million in capital spending on public housing repairs and maintenance. The District also added support for repairs and maintenance in additional years of the capital budget: $650,000 in FY 2021, $20 million in FY 2023, and $15 million in FY 2024. Originally, the Mayor proposed spending all of the capital budget repair money on one project – Claridge Towers in Ward 2 – but the funding will now support critical deferred maintenance issues at multiple DCHA properties. DCFPI and many other advocates had called for $60 million in FY 2022 to make long overdue progress on improving housing conditions and reducing racially disparate health risks for DC’s largely Black public housing residents.

The District capital budget also supports the New Communities Initiative – a DC government program intended to redevelop distressed public housing sites into mixed-income developments using four guiding principles: build first, one for one replacement, right to return, and mixed-income housing. Each of the New Communities projects are years away from completion and concerns remain about the program’s efficacy and future.[4] The Office of the Deputy Mayor for Planning and Economic Development’s capital budget includes:

The approved budget adds two additional members to the 11-person DCHA Board of Commissioners – one nominated by the Mayor and approved by Council resolution, and one appointed by the DC Council. By amendment, the Council defeated an additional measure that would have increased the minimum value of contracts that must be approved by the DCHA Board before DCHA can execute them from $250,000 to $500,000. Through both actions, the DC Council is attempting to create greater transparency and assume more oversight over DCHA and its board. This is clearly needed as the ongoing lack of transparency at DCHA – including the Board’s last-minute decision to terminate a planned nationwide search and instead approve a two-year contract for the interim DCHA Executive Director – continues to undermine trust in the agency.[5], [6]

The approved budget includes $18.8 million in local and federal funds for the Home Purchase Assistance Program (HPAP) and $5 million for the Employer Assisted Housing Program (EAHP). The assistance for HPAP represents a $500,000 decrease while the EAHP assistance represents a $4 million increase from FY 2021. HPAP provides interest-free loans to low- and moderate-income first-time homebuyers for down payment and closing cost assistance, while EAHP provides down payment and closing cost assistance to qualified DC government employees. Prior to the pandemic, funding available for down payment assistance had steadily increased, allowing the District to increase the maximum amount of assistance available per household and to keep up with demand and high and rising home prices.

Black homeowners continue to make up a large percentage of HPAP and EAHP program recipients – many of whom have incomes between 51 and 80 percent of median family income. Recent program statistics show that:

To further support and retain Black DC residents, the Council also added a one-time $500,000 enhancement within DHCD to support the development of an outreach and capacity building program to promote homeownership for residents living in Wards 7 and 8.

In the approved FY 2021 budget, lawmakers created a property tax abatement program, Tax Abatements for Affordable Housing in High-Needs Areas (HANTA), to incentivize the development of affordable housing in certain areas of the city with less affordability.[8] The program will begin offering abatements to certain developments in FY 2024. During the budget vote for FY 2022, the Council considered expanding the neighborhoods that are eligible for this program to include the Golden Triangle and Downtown Business Investment Districts. Expansion would have led to greater costs for the District and without much benefit.

While geographic targeting for affordable housing development is laudable, the income threshold for this program is too high and will fail to incentivize development of housing for the District’s lowest income renters. In April 2021, DCFPI submitted comments on the proposed regulations for HANTA, encouraging DHCD to increase the program’s affordability requirements and improve transparency.[9]  Final regulations for HANTA have not yet been released.

The approved budget includes $5 million for the Generating Affordability in Neighborhoods (GAIN) Act, which would create a program that pays landlords to subsidize affordable rents for tenants earning less than 30 or 50 percent of area median family income. The bill has not yet had a hearing, meaning the Council and public have not yet had a chance to weigh in on this program’s design.