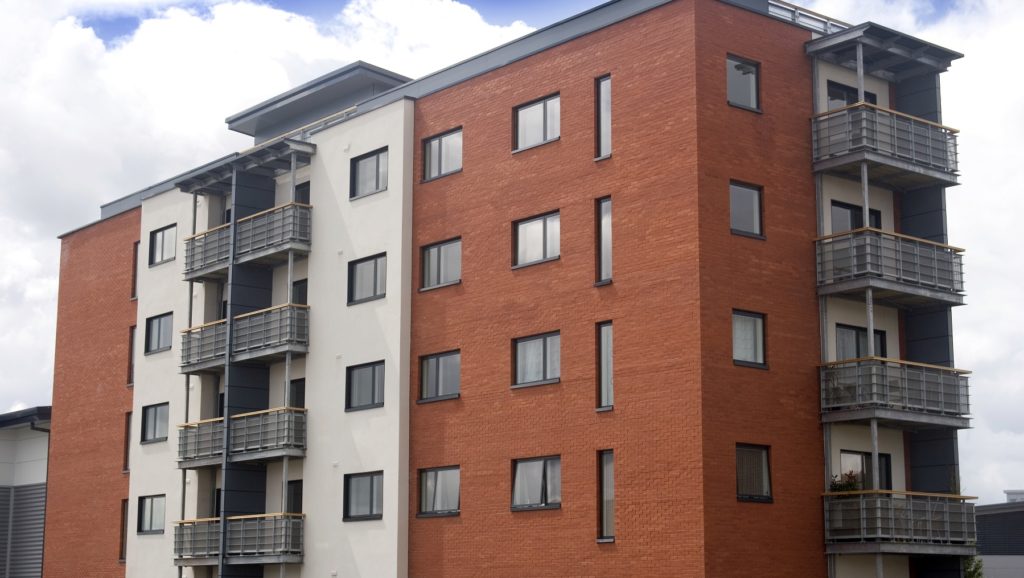 The District’s recent commitment to build more affordable housing—with $100 million per year for the Housing Production Trust Fund (HPTF) since fiscal year (FY) 2015—is notable, but it also is not enough. Housing construction costs have increased over the past four years, and as a result the $100 million is producing one-third fewer units than in 2015. Matching the 2015 output today would require over $150 million. Beyond that, fully tackling DC’s affordable housing challenges for its lowest income residents would require $230 million each year for the Housing Production Trust Fund.

DC’s housing challenges require a bold solution. Doubling DC’s Housing Production Trust Fund to $200 million in FY 2020 would make important progress. This would be consistent with Mayor Bowser’s offer to Amazon to “double down” on DC’s annual investment into the Housing Production Trust Fund. And it would be consistent with the level of HPTF money awarded in recent years, including $160 million last year. (Some funds were available from prior years.)

Ensuring that all DC residents have a safe and affordable home is critical to long-term residents being able to stay in their communities, giving children the stability they need, and ending homelessness. Creating more affordable housing also is critical to addressing DC’s racial inequities. The enduring legacies of structural and individualized racism — racist zoning and residential segregation, redlining, restrictive covenants, practices barring federal employment and access to Homestead and New Deal programs, etc. — that for years prohibited Black families from equitably accessing the housing and employment markets, is further impacting all communities of color today. Nearly 90 percent of extremely low-income, severely rent-burdened households in the District are headed by a person of color.[1]

Beyond increasing the investment in the Housing Production Trust Fund, it also is important to ensure that the housing it creates serves DC’s lowest-income families. Even though the HPTF is required to devote at least 40 percent of its resources to these households, the target requirement has been met only once in five years.

The Housing Production Trust Fund is DC’s primary tool to finance the production and preservation of affordable housing. Operated by the Department of Housing and Community Development (DHCD), it was created in 1988 as a response to a nationwide federal government divestment in affordable housing programs.[2] The Housing Act of 2002 authorized the HPTF to receive 15 percent of revenue from real property transfer and deed recordation taxes each fiscal year.[3]

Because deed transfer and recordation taxes fluctuate a lot from year to year, the amount generated for the Housing Production Trust Fund each year widely fluctuated based on real estate market dynamics. During the Great Recession, when many Black and Latinx families lost their homes and therefore, most of the household wealth they had accumulated over time, the HPTF lost much of its funding to address exacerbated housing needs. Dedicated tax funding for the Housing Production Trust Fund fell by over 70 percent from nearly $70 million in FY 2007 to $20 million in FY 2012.[4]

In FY 2015, Mayor Bowser committed to provide a $100 million commitment to the Housing Production Trust Fund in the city’s budget every year to provide more funding and stability. Since then, the District has supplemented the dedicated property transfer and deed recordation tax revenue with one-time surplus funds in order to hit the $100 million target each fiscal year.

While the Mayor has consistently met her $100 million commitment to the Housing Production Trust Fund since 2015, the amount committed must be doubled in order to keep up with rising costs and needs – such as lower income targeting and family-sized units.

Given these needs, funding the Housing Production Trust Fund at $200 million would ensure that the city produces more affordable units than in 2015—rather than losing ground—and would bring DC closer to a 10-year plan to meet its housing challenges.

While doubling the Housing Production Trust Fund is a substantial task, there are signs that the District is able to accomplish this. First, the Bowser Administration awarded more than $100 million to affordable housing projects financed by the HPTF in each of the prior three fiscal years. The average amount was $138 million and the highest amount was $168 million, in FY 2018.[7] In addition, the administration was willing to support the arrival of Amazon HQ2 by “doubling-down” on the District’s annual investment into the Housing Production Trust Fund.[8] More recently, the Mayor demonstrated potential willingness to deploy that capacity by challenging policymakers to think creatively about “the single biggest issue” in the District – affordable housing.[9]

How to Pay for a Housing Production Trust Fund Increase

There are a number of  ways to increase the annual budget investment into the Housing Production Trust Fund, including the following three.

The simplest way to begin doubling our investment in the Housing Production Trust Fund is to appropriate funding from the District’s General Fund — expenditures funded with locally raised taxes and fees — each fiscal year.[10] This would guarantee long-term investments in affordable housing by enabling the HPTF to withstand future market fluctuations and increasing its ability to serve families with the lowest incomes.

The DC Fund Balance — the District’s accumulated resources — has nearly reached $3 billion as a result of yet another surplus at the end of last year.[11] Unfortunately, mandates put in place by the Mayor and Council in 2010 stipulate that all available surplus funds must be placed into savings.[12] This rule will ease when 60 days of operating reserves is reached — we’re currently just two days short.[13] The District had a $200 million surplus in FY 2018 and all available funds —$40 million—were put in the city’s cash reserves. Saving is important, but it is even more imperative that we reverse those rules to invest some of the growing surplus in more affordable housing for the people hurting most. Black residents, for example, are still recovering from the uneven personal economic effects of the Great Recession, especially as seen in the racial unemployment gap at all levels of educational attainment.[14]

Recent reports by the Center on Budget and Policy Priorities (CBPP) demonstrate that we can begin to address structural racism and structural barriers to opportunity by intentionally ushering in a more equitable tax system.[15] In DC, everyone pays the same property tax rate. Real estate transfer taxes are the same for a home purchased for $500,000 and a home purchased for $5 million. And very few affordable homes are being built west of Rock Creek Park, where access to high-performing schools, recreational spaces and access to healthy foods is abundant and beneficial to long-term success.[16] One solution to address these inequities is a “mansion tax” that could be levied on the wealthiest households via real estate transfer taxes and property taxes to ensure that DC’s wealthiest residents pay their fair share.[17] Property tax surcharges, for example, could be used to generate $74 million in revenue, some of which could be used for the production and preservation of affordable housing in areas of higher opportunity.

We urge the Mayor and Council to double down on the Housing Production Trust Fund to truly put DC on the path toward meeting the housing needs of all residents. 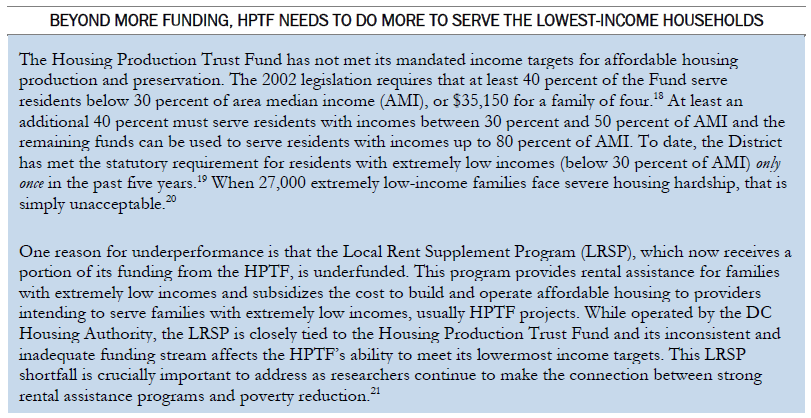 [5] The data source for this analysis is DHCD’s Development Pipeline Report. In some cases of missing data fields, DCFPI used Council submissions, DHCD press releases, developer websites, and other sources to obtain and fill in the missing data. The data analysis reflects DHCD pipeline information compiled through February 2018.