Despite significant economic growth in the District since 2010, and an overall drop in unemployment, the recovery since the Great Recession has been very uneven, particularly across racial groups. Black DC residents continue to experience elevated rates of joblessness since the Great Recession of almost a decade ago—meaning they cannot find a job despite actively looking. As a result, the black-white unemployment gap in DC is widening even further.

Black DC residents are the only racial/ethnic group whose unemployment rate is actually worse than it was in 2007, prior to the Great Recession, according to a DCFPI analysis of data from the Current Population Survey. While unemployment among black working-age DC residents has fallen in recent years, 13.4 percent still were unemployed in 2016, compared with 9.5 percent in 2007. Meanwhile, just 1.6 percent of white residents and 3.6 percent of Hispanic adults were unemployed in 2016. 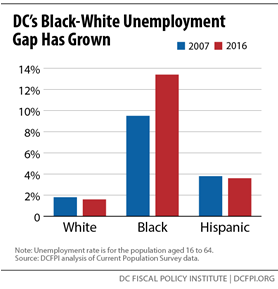 Because unemployment for black DC adults has not fallen substantially in the economic recovery, unlike white and Hispanic workers, DC’s unemployment gap across race is growing.

Although the black-white unemployment gap is often attributed primarily to disparities in education, this indicates that other factors, such as systemic racism and employment discrimination also contribute to high unemployment among black residents.