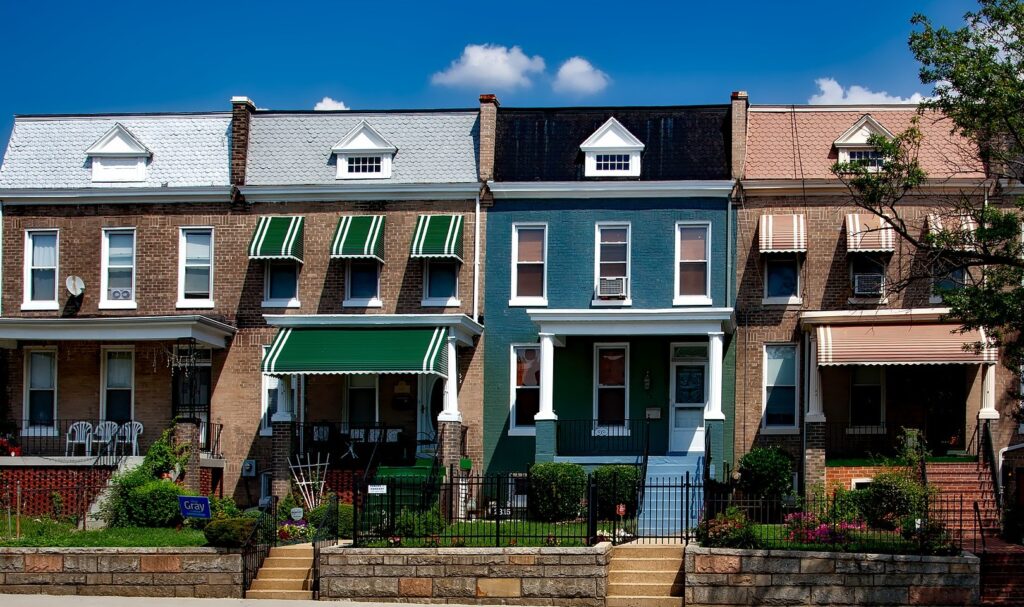 As prosperity and population in DC grow, residents with low incomes increasingly struggle with the District’s high and rising housing costs. The disappearance of affordable housing is a result of many generations of policy choices. This lack of affordable housing, particularly for larger families, puts enormous stress on family budgets and leaves many at risk of eviction and homelessness.

Black and brown residents are disproportionately harmed by the disappearance of affordable housing. Nationwide, nearly half of all Black renters are housing insecure whereas about a quarter of white renting households are housing insecure. A dramatic increase in the cost of housing in DC has led to a decades-long wave of displacement. An analysis of census data shows that in 2000, 32 of DC’s 62 residential neighborhoods were majority Black but by 2020, only 22 residential areas remained majority Black. In that time period, the Black population declined by nearly 58,000 while the white population grew by almost 86,000.

Having a safe, stable, and affordable place to call home is intrinsically connected to positive life outcomes in school performance, job retention, physical and mental health, and economic security. It ensures families aren’t forced to make difficult decisions between paying the rent or putting food on the table. When individuals and families don’t have to spend most of their income on housing, they may be able to save for and invest in their futures.

The idea of what’s affordable is relative. Usually, housing is considered affordable when a household spends no more than 30 percent of its income on housing and utilities. In DC, Black residents are nearly twice as likely as white residents to spend more than 30 percent or more of a household’s income on rent. This “rule of thumb” dates back to 1969 and is widely used in housing policy. While useful, the measure has its flaws—namely that it does not take into account ability to pay. A household that spends 30 percent of a $300,000 income on housing will have a lot more left to spend on other necessities than a household with a $25,000 income.

Eligibility for certain housing assistance programs is based on an individual’s or family’s income and how it compares with average income levels and costs (Table 1). In federal and DC affordable housing programs, a person’s eligibility is based on how their income compares with the area median income (AMI). That is the income for the middle household in the DC region, which includes not only DC but the suburbs. Currently, the Washington region’s AMI is $142,300 for a family of four, which skews higher due in part due to the inclusion of suburban regions that have higher income levels.

Some housing programs, like public housing, serve primarily “extremely low-income” households, or those below 30 percent of AMI, or $42,700 for a family of four in DC. This includes many residents on fixed incomes such as seniors living on Social Security payments. Other programs, such as project-based vouchers (see below) help “very-low income” families (under $71,150 in DC for a family of four) and “low-income” families (under $113,850). The wide range of incomes that can qualify as “low” –particularly when there is a lack of targeting or poor accountability for reaching targets—sometimes allows developers receiving subsidies to meet their affordable housing commitments with high rents and results in less housing being made affordable for those with extremely low incomes.

While families at many incomes struggle with the cost of housing in DC, where the average rent for a one bedroom is $2,428 as of October 2022, extremely low-income renters struggle the most. Most DC families with incomes below 30 percent of AMI spend more than half their income on rent, meaning many are at risk of eviction and have little left over for other basics such as health care, transportation, and educational expenses. More than 25 percent of households with incomes under 50 percent of AMI also spend more than half their income on rent.

What Tools Do We Have for Affordable Housing?

The current shortage of affordable housing is a result of deliberate policy and spending choices, past and present, at both the federal and local level. However, federal and local governments can and do step in to help subsidize costs. They can do that in a variety of ways, including subsidizing the construction of housing to ensure that new developments include affordable units, or by providing renters or homeowners direct cash assistance so that those residents can stay in their homes.

The District uses grants and low-cost loans to incentivize developers to create and preserve affordable housing.

Through this program, the DC government uses local dollars, as opposed to federal funding, to help cover the difference between the rent a family can afford to pay and the full rent. The program operates through three different voucher types.

Elected officials have passed laws to incentivize or mandate the creation or preservation of affordable housing and to stabilize housing for existing renters.

Generations of exclusionary, racist practices have led to a large racial wealth gap and homeownership gap: in DC, only 34 percent of Black residents own their homes compared with nearly 49 percent of white residents. In response to this racial wealth gap, In 2022, Mayor Bowser created the Black Homeownership Strike Force, which released a list of recommendations to increase Black homeownership. Right now, the District provides low- or no-interest loans to eligible residents through a range of programs in order to expand access to homeownership.

A growing gap between rents and housing prices and wages for those with lower paid jobs has made it increasingly difficult for residents with low and moderate incomes to remain in the District. Given the enormity of its affordable housing crisis, lawmakers should adopt a thoughtful, holistic anti-displacement strategy that pairs long-term solutions with programs that meet residents’ urgent needs. Lawmakers must also ensure strong oversight to support the success of this strategy.

DC will only make progress towards addressing its housing affordability crisis if lawmakers commit to making that affordability permanent. Lawmakers can achieve this in a number of ways, including expanding and strengthening rent control and ensuring that HPTF investments are both paired with ongoing operating subsidies to keep tenant rents low.

Invest in Resources for Residents with Urgent Housing Needs

To do that, lawmakers can invest money in the Emergency Rental Assistance Program (ERAP). ERAP prevents evictions by helping residents pay overdue rent and legal costs. District leaders can also increase funding for, and improve implementation of, its voucher programs to ensure that residents are able to quickly find housing that meets their needs. Policymakers can also work closely with District agencies and community-based organizations to strengthen tenant protections and prevent evictions and other forms of displacement.

As DC invests more in affordable housing programs, lawmakers must hold DC agencies accountable to implementing these programs effectively via increased oversight.  Oversight is only possible with transparency, or publicly accessible information. With regular, standardized, and clear reporting about program implementation from agencies, DC Council can make appropriate legislative or funding changes in order to meet goals such as the production of affordable housing, the provision of vouchers, or the upkeep of public housing.