Chairman Orange and members of the Committee on Business, Consumer & Regulatory Affairs, thank you for the opportunity to speak today. My name is Ilana Boivie, and I am the Senior Policy Analyst at the DC Fiscal Policy Institute. DCFPI is a non-profit organization that promotes budget and policy choices to expand economic opportunity and reduce income inequality for District of Columbia residents, through independent research and policy recommendations.

We are pleased to see that the proposed FY 2017 budget for the Department of Employment Services (DOES) has not been cut from its level last year, given the tremendous need for a strong workforce development system in the District. As in FY 2016, the budget focuses largely on subsidized jobs programs. While these are important, a comprehensive training system needs a range of services. In particular, the DOES budget does not focus substantial resources on programs for those with the largest barriers to employment, such as those with low literacy. This contributes to the ongoing challenge of fully utilizing federal workforce development money, since federally funded training programs typically require a certain level of literacy.

Also, while the budget includes one additional full-time employee at the Office of Wage-Hour, more should be done to enhance public education and enforcement efforts around new worker protection laws, such as minimum wage, paid sick days, and wage theft.

Given the tremendous need for a robust workforce development system in the District, DCFPI is pleased to see that overall funding for DOES’s workforce programs has been maintained in the proposed FY 2017 budget. The $76 million in local and federal funds for workforce development programs at DOES is nearly identical to the FY 2016 budget, after adjusting for inflation.

Funding for Workforce Development in the Department of Employment Services, FY 2015-2017

While subsidized jobs programs should be a prominent part of DC’s job training system, the District needs to invest in a wider array of services. Currently, some 60,000 residents in DC lack a high school diploma,[2] and far too many adult residents have less than an eight grade reading level. For these residents, more supportive educational programs are needed to bring them up to a level at which they can enter a higher-level training program and meaningful career path. The federal Workforce Innovation and Opportunity Act (WIOA) mandates that those with the highest barriers to employment and the lowest educational levels be served first. Unfortunately, the proposed FY 2017 budget does not seem to include any new efforts to reach this population. As the Council reviews the FY 2017 budget, and as DOES looks forward to future investments, we hope that further funding for occupational programs with a literacy component will be considered.

Investing more in adult literacy will also help with another problem that DOES has experienced for several years — the underspending of federal workforce funds. While DOES’s workforce budget includes a substantial investment of federal money, the department has spent less than its available funding in recent years. For example, in 2015, DOES spent $54 million on employment services, compared with $68 million in available funding. 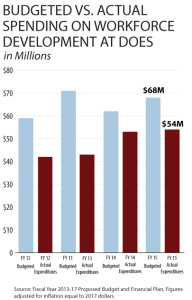 Part of the agency’s underspending problem may lie in the fact that many federal programs are aimed at those at an eight grade reading level or above. Local money could be used to target residents below this level, in order to get them up to speed to enter federal programs.

DOES has recently made efforts to spend down more of its federal money. As of February 2016, DOES reports that it has spent 34 percent of its federal resources on youth programs, and is on track to expend its federal funds by the end of the year.[3]

The District should continue to make concerted efforts to fully utilize federal funding by better aligning local and federal programs. This will mean, as mentioned above, refocusing local programs to serve District residents with the highest barriers to employment and lowest educational attainment levels, so that they are adequately prepared to enter federally funded programs, which have tended to focus on those with higher educational attainment.

It should be noted that the Workforce Investment Council (WIC) recently made strides toward this, by voting to remove the eighth grade reading requirement for Individual Training Account providers.[4] But more should be done to encourage and incentivize training providers to actually target those at the lowest literacy and numeracy levels.

Budget Does Not Include Enough New Funds to Enforce Worker Protections

The District enacted a number of laws in recent years to improve wages and benefits of people who work in the District, including increases to the minimum wage, paid sick and safe leave, new penalties for “wage theft” when employers fail to pay workers fully, and protecting workers from discrimination.

The proposed FY 2017 budget allocates funding for one additional employee at the Office of Wage-Hour (OWH), but this is not enough to ensure adequate education and enforcement so that all workers may truly benefit from these laws. For example, information provided by DOES for the FY 2016 Performance Oversight hearing projects a large increase in claims for FY 2016 over the previous year — up to 23 percent.[5] Increasing OWH staff by one full-time employee — from 16 to 17 — is unlikely to be enough to accommodate such an increase.

In addition, the agency has stated that it will be shifting gears from education of new workers’ laws to enforcement.[6] We would contend that both of these activities are equally important, since educating both employers and employees is a necessary, proactive initial step in ensuring that laws are followed.

While educational initiatives such as last year’s Zip Code Project have ended, additional proactive public outreach measures can be taken, including bus, metro, and media ads; regular community forums; and worker-friendly fact sheets. Educational programs should not be sacrificed for the sake of enforcement. If staffing is not currently adequate for both, we recommend that funding should be increased.

Thank you again for the opportunity to testify. I am happy to answer any questions.

[1] Most of the funding for the LEAP program is not included in the DOES workforce budget. While DOES handles administration of the LEAP program (paid for through its local adult training budget), the subsidized wages (i.e., the vast majority of the program’s cost) are paid by the agencies that participate in the LEAP program.

[2] American Community Survey. “Sex by Educational Attainment for the Population 25 Years and Over.” 2009-2013 Five Year Estimates.

[3] March 30, 2016. “Grosso exchange of letters with DOES about WIC’s oversight of youth programs.” http://www.davidgrosso.org/grosso-analysis/2016/3/30/grosso-exchange-of-letters-with-does-about-wics-oversight-of-youth-programs

To print a copy of this testimony, click here.