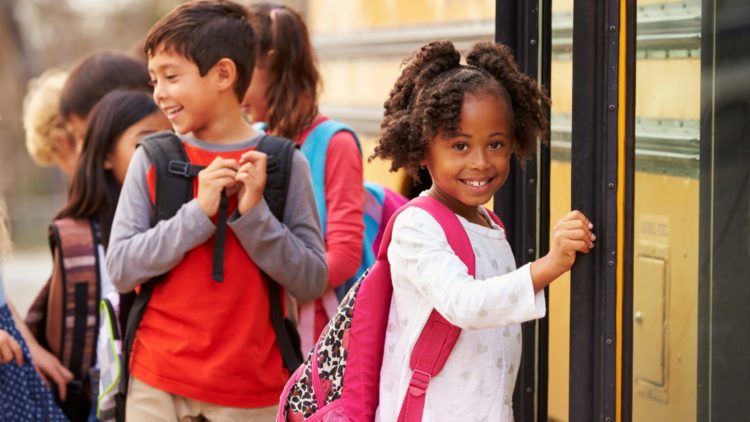 Recent changes to school budgeting practices made by the District’s leaders are obscuring the level of funding needed to keep up with growing educational expenses from enrollment growth, inflation, and rising teacher expenses. This has resulted in inadequate funding increases for one of the most important roles of DC government—educating our children—and a budget that in two of the last three years has failed to keep up with rising teacher costs. The absence of estimates of rising educational costs is also a step backward in transparency, making it challenging for parents and other stakeholders to assess the school budget each year. Given these problems, the District should take steps to estimate and publicize information on how educational costs are changing.

The District has a tool to estimate how much it would cost in the coming year to fund current programs and services—the Current Services Funding Level (CSFL) prepared every fall by the Chief Financial Officer (CFO)—but in recent years the CSFL has included nearly every part of the District budget except for public schools and public charter schools. The CSFL, or “baseline,” is a neutral benchmark that measures the fiscal impact of a budget proposal or policy change relative to the status quo. Failing to develop a CSFL for DC Public Schools (DCPS) and DC Public Charter Schools (DCPCS) is a departure from historical practice and best practices.

The decision to stop developing a CSFL for schools appears to reflect a lack of support among elected officials. In 2009, DC’s leaders eliminated a requirement for inflation adjustments to the Uniform Per Pupil Funding Formula (UPSFF), the main tool for funding schools. While DC law requires the Mayor to submit an “algorithm” to the Council to explain the specific factors and methodology she uses to determine proposed changes in the UPSFF, the details in recent years have been thin and included considerations beyond growing costs and need, such as revenue availability and other budget priorities.[1]

The Mayor also recently removed the CSFL figures from her proposed budget documents across all policy areas, further reducing transparency.

The consequences of failing to fund public schools based on real costs in a transparent manner are harmful: The fiscal year (FY) 2020 per-pupil spending level is $860, or seven percent, below the inflation-adjusted funding level recommended in the 2013 Adequacy Study (Figure 1).[2] Under the pressures of an inadequate budget, DCPS officials are diverting funds meant to provide additional support to students at risk of academic failure to close the gap. [3] This practice continues a cruel cycle where low-income Black and brown students do not get the resources they deserve, and many then leave school unprepared for success in college or career—upholding generations of racial and socioeconomic disparities in outcomes in the District. 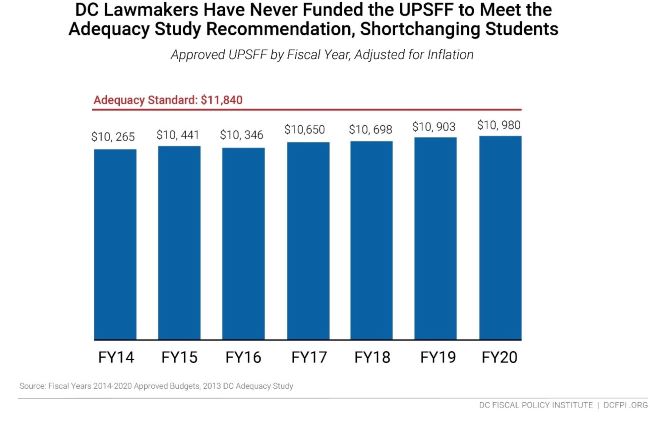 The CSFL is essential for budget transparency and accountability because it allows the public to see exactly how the budget works and then hold elected officials accountable for those changes. DC lawmakers should improve current budgeting practices and increase transparency and accountability at the front end of the school budget process by strengthening the CSFL process and making sure current service budget estimates are included in budget documents. This is how it can be done:

Efforts to estimate needed changes to school funding from year to year is a complement to DCFPI’s recommendation to require the Deputy Mayor of Education to fully reexamine the cost of providing an adequate education (i.e., to recalculate the UPSFF) every five years.[4] 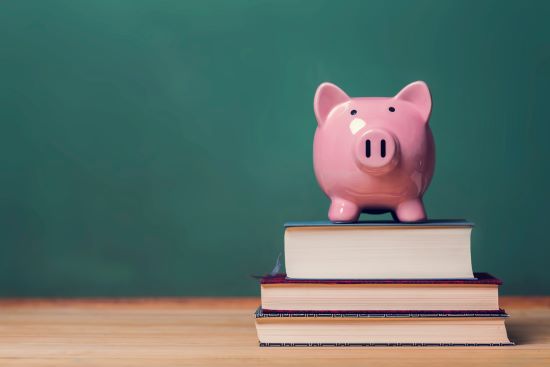 According to the Center on Budget and Policy Priorities, one of the nation’s foremost thinktanks on fiscal policy, a current services budget is robust and meaningful when it:

The Current Role of the CSFL in DC’s Budget Process

The DC CFO, which is tasked with ensuring “the fiscal and financial stability, accountability and integrity of the Government of the District of Columbia,”[8] plays an important role in the DC budget process. Every fall, the CFO prepares the CSFL to provide an estimate of how much it will cost the District to continue existing levels of services in the next fiscal year. The CFO can choose whether to develop a CSFL for any department and decide which economic assumptions to use when calculating CSFL estimates.

The CSFL is intended to help the Mayor and other policymakers understand, at the start of the budget process, what’s needed to keep up with growing costs and needs.

The Mayor’s current process doesn’t utilize the CSFL and instead takes into consideration the prior year’s approved budget, projected revenue availability for the upcoming year, and her overall budget priorities. Not using the CSFL as a starting point can lead to several pitfalls. An approved budget from the current year does not reflect how much it will cost the District to provide current programs and services in the upcoming year, therefore underestimating what’s needed to keep up with the status quo. This process lowers the bar, making it seem as though year-to-year investments are increasing, when in fact they may not even be keeping up with rising costs or may not be growing much beyond rising costs.  The fiscal year 2017 budget process—back when the CFO produced a CSFL for the public school systems—illustrates these pitfalls. The Mayor’s proposed budget for DCPS that year was $756.4 million, which was four percent higher than the FY 2016 approved budget but only two percent higher than the CSFL. (Figure 2, pg. 5). 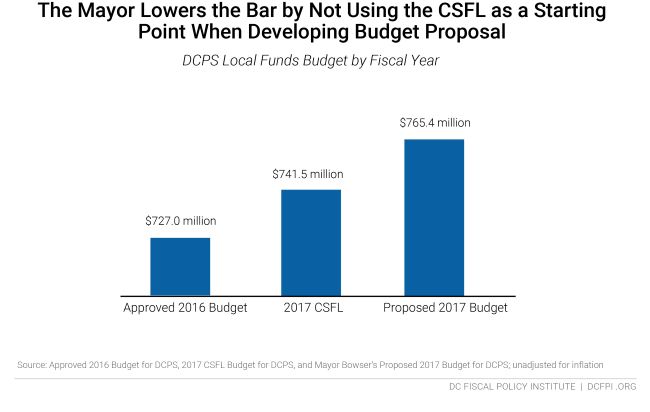 Another change that is out of line with best practices is the Mayor’s recent decision to remove the CSFL from her budget proposals for all agencies. This decision reduces budget transparency, making it more challenging for policymakers and the public to easily assess whether the proposal is adequate to keep up with growing expenses.

The District allocates local revenues to DCPS and DCPCS through the UPSFF, which starts with a foundational level dollar amount that is meant to reflect the per-student amount needed to provide general education services, with adjustments for students in different grade levels. The formula also provides additional funding to schools for serving students in special education, English Learners, and students who are considered at-risk of academic failure.

DC law formerly required the Mayor to adjust the foundation amount by at least the average rate of inflation when developing a budget proposal. Policymakers repealed this requirement in 2009; now, the Mayor can use any economic assumption to determine their proposed yearly adjustments to the UPSFF base level. The Mayor’s proposal sets the tone of the budget debate, but the Council has full independence to put forward a UPSFF base level of their own choosing as well. Since 2009, the education budget appears to be built largely around budget constraints—how much revenues are rising and other priorities—rather than on what is really needed. 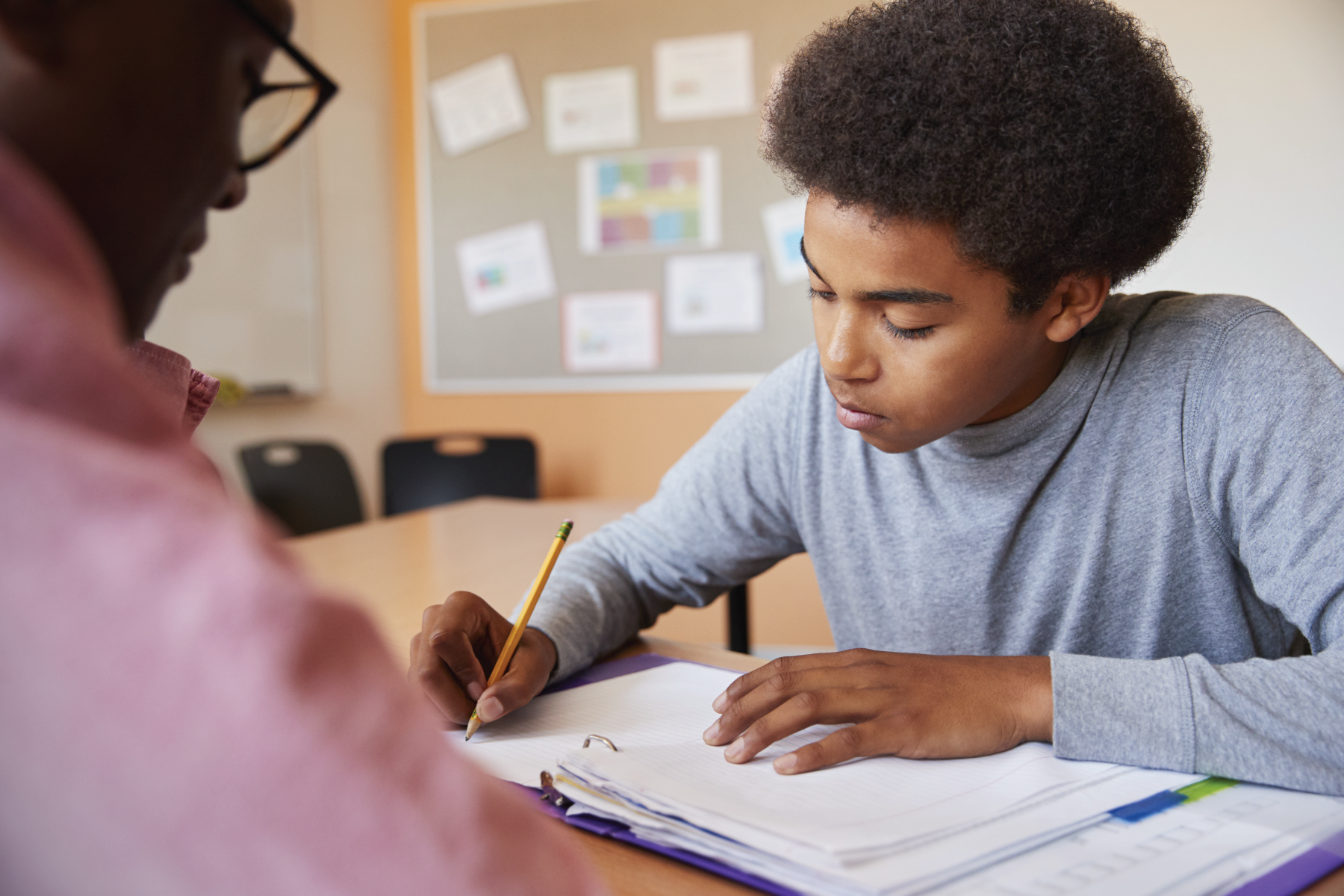 The CFO’s choice to not create a CSFL for DCPS or DCPCS is a departure from previous practices.[9] In past years, the CFO adjusted each sector’s budget using a “Student Funding Formula Inflation Factor,” described as a factor reflective of “the inflationary costs that are generally associated with educating students” in both sectors.[10] For several years, this inflation factor was two percent, which the CFO applied to the UPSFF base level but did not adjust for student enrollment growth, meaning the CSFL provided some clarity but was an underestimate of what was needed to keep up with growing costs.

The Harm of Not Keeping Up

For years, District lawmakers have approved education budgets that failed to provide adequate resources to meet the needs of the students showing up to school eager to learn every day.  For much of the last decade (i.e., after lawmakers eliminated the inflation adjustment requirement in 2009), there has been an inconsistent relationship between increases to the UPSFF and the average rate of inflation,[11] and FY 2020 was second time in three years that lawmakers failed to approve a UPSFF that kept up with rising teacher expenses. (Figure 3). When the UPSFF grows slower than inflation and personnel costs, schools effectively face budget cuts. In recent years, these cuts disproportionally affected schools in low-income, Black neighborhoods. In the current school year, 19 schools faced cuts of five percent or more, and 15 of them are in Ward 7 or Ward 8. 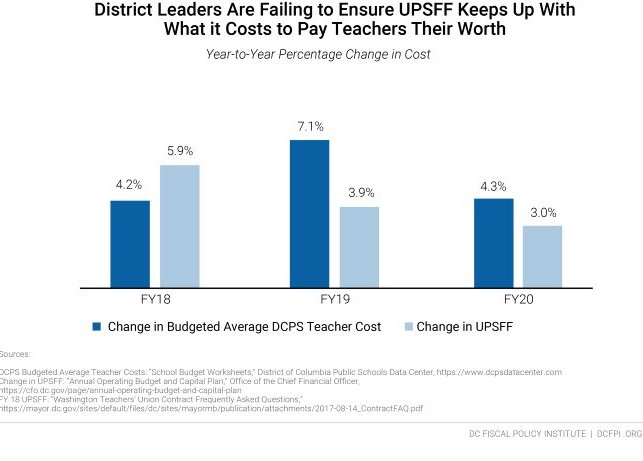 This reality, which has been well-documented by the DC Council Budget Office and the DC Council Committee on Education, [12],[13] may have prompted councilmembers to introduce legislation to improve school finance transparency in 2019. It may have also prompted the DC Council to update an existing law to require the Mayor to submit an “algorithm that will be used to determine the next fiscal year’s Formula’s foundation level, which shall include variables for the cost of teachers and other classroom-based personnel and for both school-based and non-school-based administrative personnel.”[14] As noted above, however, Mayor Bowser has not shared detailed information on how her proposed school funding levels have been set.

A Better Way Forward: Steps DC Should Take to Budget for the Future

Every child in DC deserves to attend a public school that is adequately funded to keep up with growing costs and needs. The Chief Financial Officer, Mayor, and DC Council can improve the steps they take to move the District toward an education budget that is informed by the real costs of providing an adequate education to every student.

To strengthen budgeting practices that can help policymakers make better choices for the District’s education budget, the following steps should be taken: 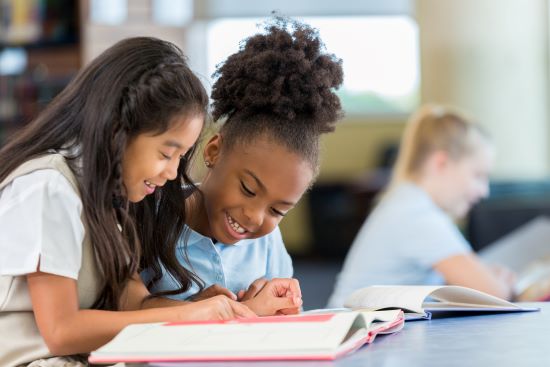 [3] Alyssa Noth, “The Funding Roadmap for Educational Justice in DC: A Call for Equity Over Equality in DC Public Schools,” December 10, 2019, https://www.dcfpi.org/all/the-funding-roadmap-for-educational-justice-in-dc/.

[6] A current services budget removes one-time funding additions from and restores one-time reductions to the approved budget from a prior fiscal year.

[7] McNichol and Grundman, “The Current Services Baseline: A Tool for Understanding Budget Choices.”

[8] Office of the Chief Financial Officer. “About OCFO,” https://cfo.dc.gov/page/about-ocfo.

[9] Even though the CFO does not prepare a CSFL for DCPS and DCPCS, he does remove one-time costs and restores one-time reductions to each sector’s budget.