The richest 1 percent of District residents would receive 41 percent of the tax cuts under the House tax plan in its first year—and nearly three-fourths of the cuts in 2027—according to an analysis released by the Institute on Taxation and Economic Policy. Low-income DC residents would see only small tax reductions, which would shrink over 10 years. Meanwhile, tax cuts would grow for the District’s richest 1 percent. 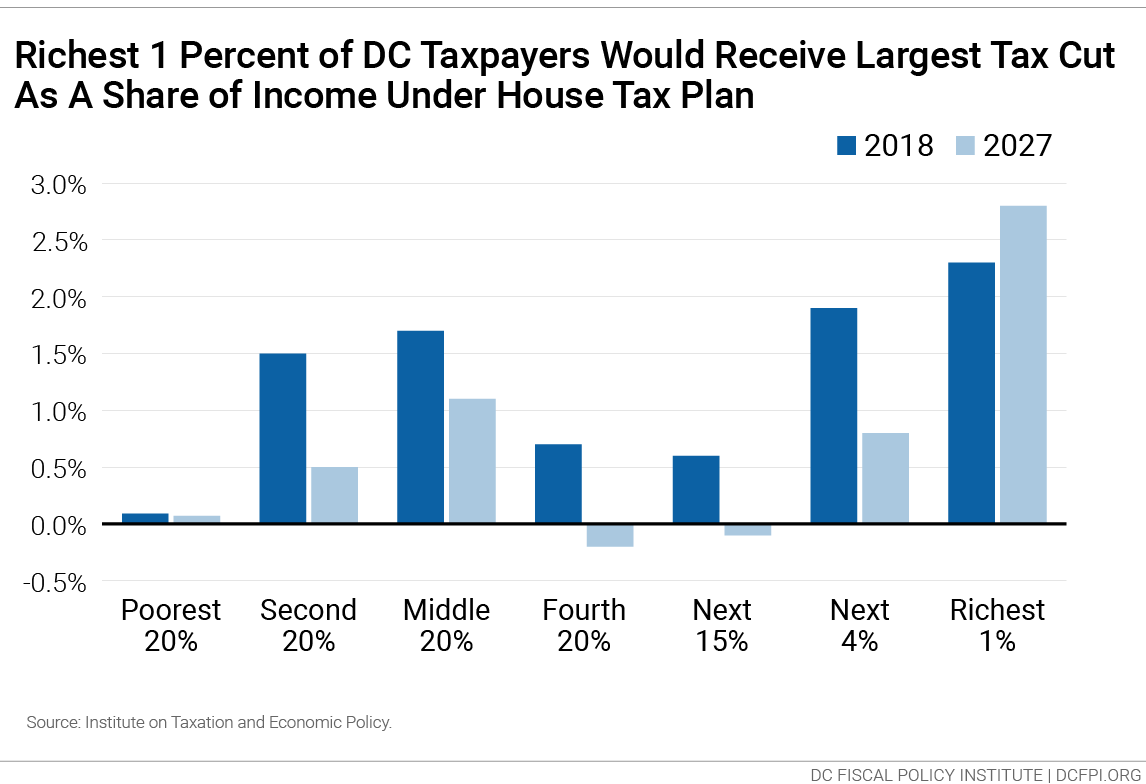 This means the House tax plan would exacerbate DC’s income inequality, which already has one of the highest income gaps among large U.S. cities. Racial inequality in the city is widening, and the wages of the bottom tenth of workers have barely grown in over 15 years.

The small tax cuts for low- and middle-income residents would erode over time because many of the House plan’s provisions benefiting those groups—such as a higher standard deduction and expanded child tax credit—would expire or become less valuable over time by growing less with inflation.

Additionally, the value of the Earned Income Tax Credit—an important tax benefit claimed by 56,000 DC residents who work but have low-incomes—would erode over time, because the House plan would change how the credit is adjusted for inflation.

Yet some of the provisions that benefit the wealthy, such as the reduction and eventual repeal of the estate tax, become more generous over time. In 2016, only 49 DC residents’ estates were subject to the federal estate tax. On average, the value of these estates was $12.6 million.

“Income and wealth gaps in the District already are wide and among the highest in the nation. Cutting taxes for the rich while doing almost nothing for DC’s lowest-income residents will make our economy even more inequitable,” said Claire Zippel, policy analyst and research coordinator at the DC Fiscal Policy Institute.

“The House tax plan would help DC’s richest one percent, while putting the city’s longtime, low-income residents at risk. Reducing revenues due to tax cuts for the wealthy will fuel calls later on to cut critical programs such as Medicaid, housing assistance, and SNAP,” said Claire Zippel.

The full analysis of the House tax plan’s impact on DC by the Institute on Taxation and Economic Policy can be found here, and the nation-wide analysis is here. 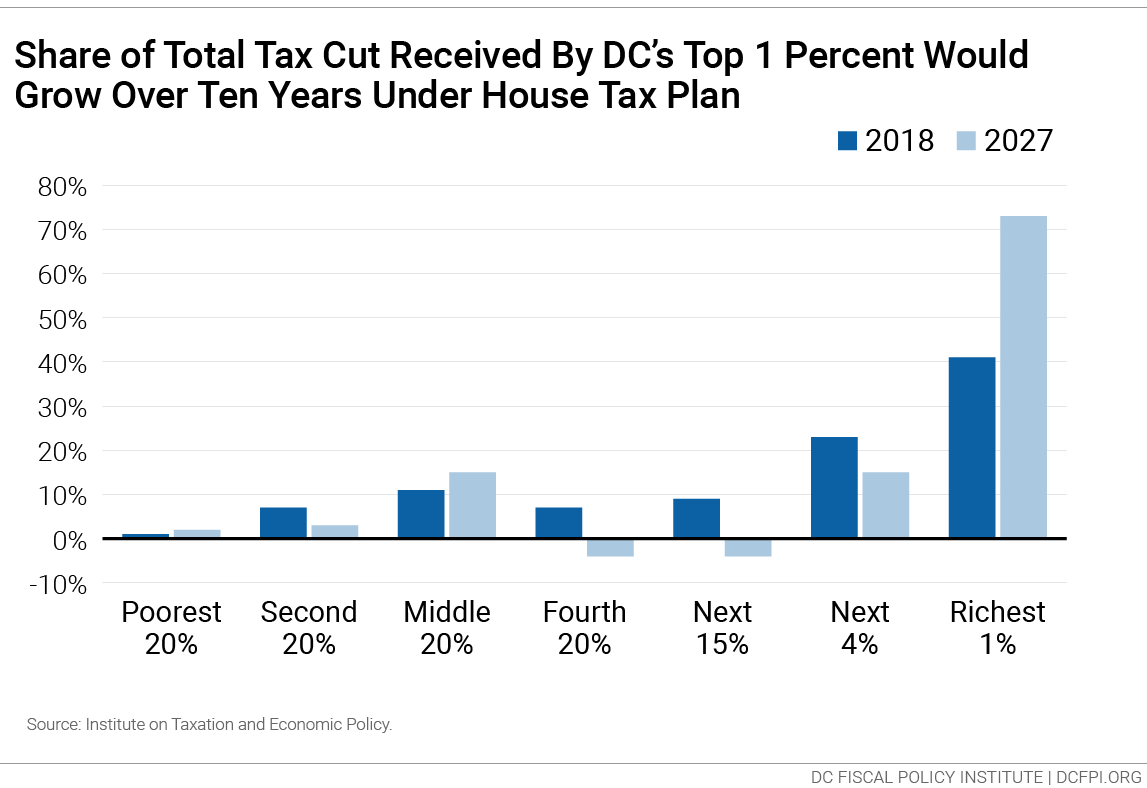 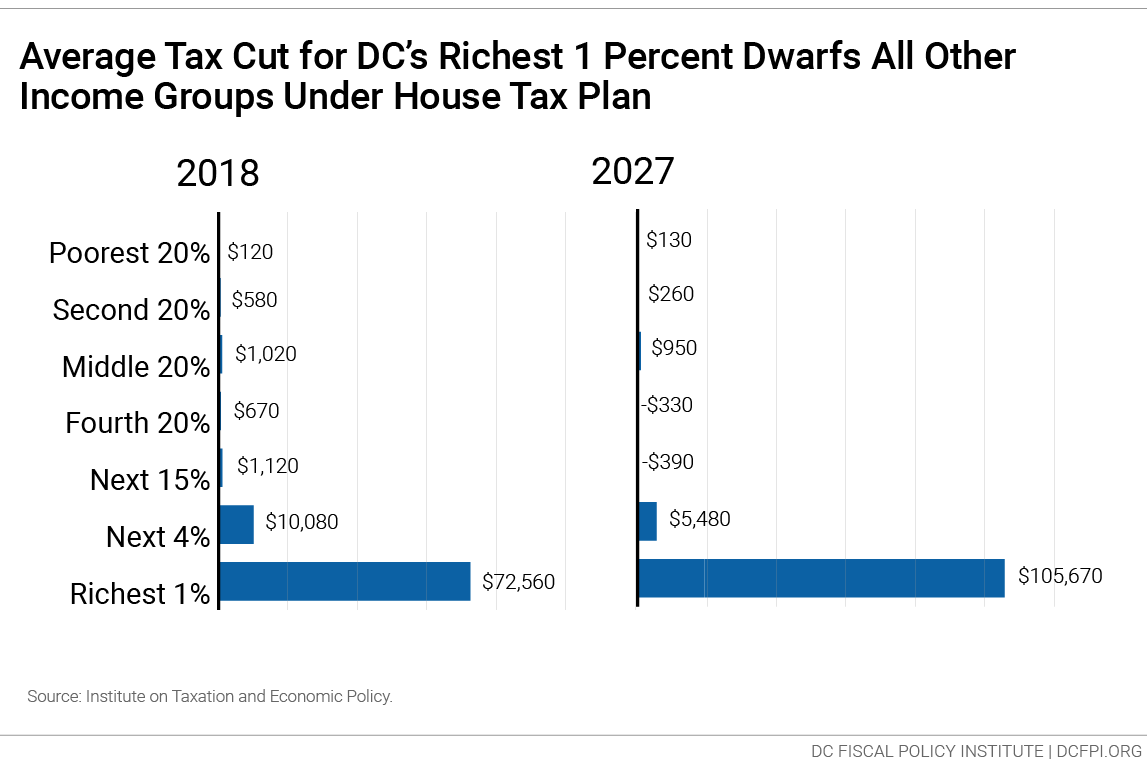