The District built up $1.4 billion in reserves, but restrictive rules leave $1.2 billion of that impossible or difficult to use to help residents and businesses struggling in the pandemic, according to a new analysis entitled, “The COVID-19 Recession is DC’s Rainy Day, but Reserve Rules Limit its Response,” from the DC Fiscal Policy Institute. If the restrictive rules remain in place, the District could be forced to make cuts in services in the upcoming budget, while leaving over $1 billion of reserves in the bank.

DC built up reserves to have cash on hand to meet 60 days of operating expenses, a target the Government Finance Officers Association recommends to address “revenue shortfalls and unanticipated expenditures.” Yet DC’s reserve rules essentially leave just 9 days of easily available cash, defeating the purpose of reaching the 60-day goal. 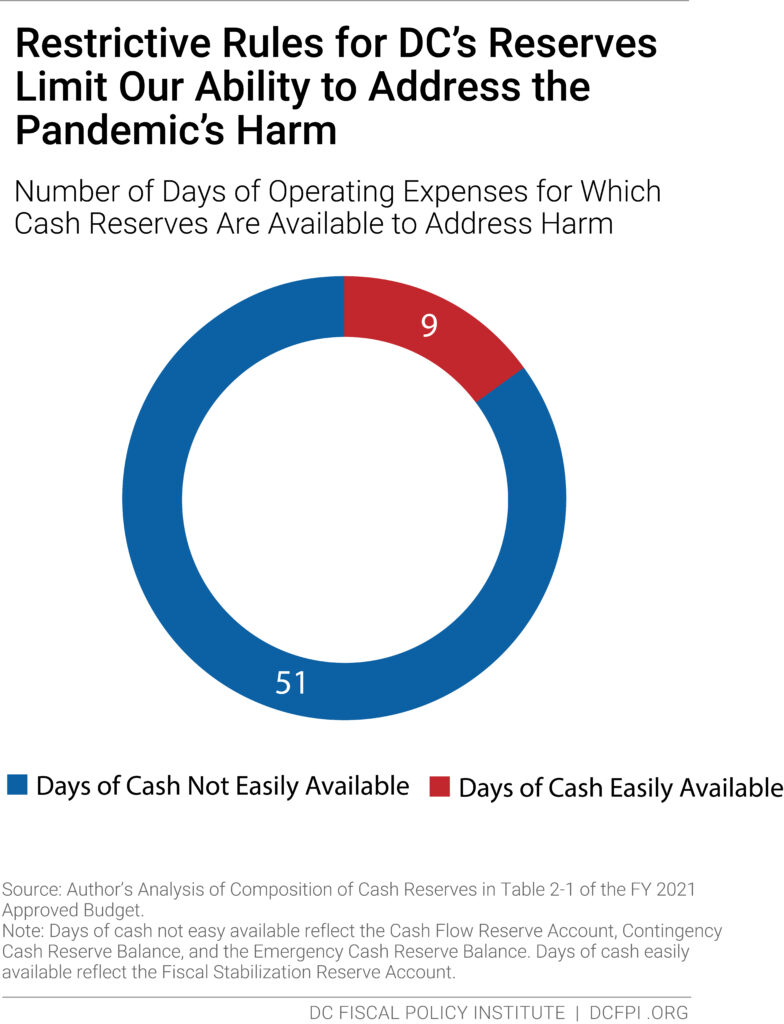 The District’s reserves are in four funds. The Cash Flow Reserve Account holds $730 million (about 31 days of DC’s savings), but it can be used only for short-term cash-flow needs, since funds used must be repaid in the same fiscal year. It is not available as a rainy day fund.

The District also has two reserves mandated by Congress, but filled with local funds. Federal rules require repayments to start within a year and be completed over two years, a rapid repayment schedule that fiscal experts recommend against.

Only one reserve is easily accessible in a recession. The Fiscal Stabilization Reserve totals $213 million (9 days of revenue) and can be used to address recession-driven revenue declines, with repayments from future budget surpluses. Not surprisingly, the mayor and Council fully used this reserve for FY 2021, which means nothing more is available for FY 2022.

Tazra Mitchell, Policy Director at DCFPI said that, ”It wouldn’t make fiscal, economic, or moral sense to leave most of our reserves in the bank in this deeply painful recession, when that money could help struggling residents and businesses and limit the recession’s damage to the DC economy.”

DCFPI recommends changing the Cash Flow Reserve Account rules to allow those funds to be tapped in a recession, and repaid from future surpluses.  This may require the District to use short-term borrowing for cash-flow purposes, but it would likely cost only a few million dollars in interest payments.  DCFPI also recommends working with Congress to remove the outdated and unnecessary restrictions on DC’s federally mandated reserves.

“Building up reserves to a 60-day goal only makes sense if those funds can be used in a recession,” Mitchell said. “The fact that DC leaders fully used our only flexible rainy day fund is a sign that we need more flexibility over the rest.”