On June 5, the DC Council took the second and final vote on the District’s budget for fiscal year 2013, which starts October 1, 2012. The proposed general fund budget ‘ the portion of the DC budget that comes from local taxes and fees, including dedicated tax revenue and special purpose funds ‘ is $6.74 billion.[1]  When federal funding for programs and services is included’in what is called gross funds’the District’s fiscal year (FY) 2013 budget is $9.4 billion. 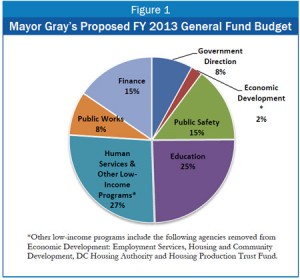 The FY 2013 general fund budget is $201 million higher than the approved FY 2012 budget, after adjusting for inflation ‘ an increase of 3 percent. (Unless otherwise noted, all figures in this analysis are adjusted for inflation to equal FY 2013 dollars.) The boost in local spending is due to several large factors: increasing Medicaid costs, rising enrollment and costs in public schools, an uptick in repayments of debt issued for construction projects, and the need to replace federal dollars that were available in FY 2012 but will not be available in FY 2013.

This report reviews the key elements of the approved FY 2013 budget, which was voted on twice by the DC Council, signed by Mayor Gray and sent to Congress to include in the federal appropriations bill.

The District’s revenue collections in FY 2013 will total $6.6 billion. The District’s tax collections dropped sharply in the Great Recession, starting in FY 2009 and have only recently recovered. FY 2013 revenue, with the inclusion of several new revenue initiatives, will still be slightly lower than those in FY 2008, the final year before the recession hit. A full discussion of revenue and the new revenue initiatives this budget year occurs below.

This analysis is part of an online “Budget Toolkit” developed each year by the DC Fiscal Policy Institute, which can be found at www.dcfpi.org.

[1] The general fund budget includes the “local funds budget” — programs and services supported by taxes and fees collected by the District ‘ as well as services supported by “special purpose” revenues or “dedicated taxes.” This analysis does not include the enterprise appropriation and keeps several dedicated funds within finance instead of enterprise so year-to-year comparisons can be made.