Thanks to the impassioned advocacy of hundreds of students, teachers, parents and community leaders, the final budget reflects a substantial increase in the new dollars invested in DC Public Schools (DCPS) and Public Charter Schools (PCS). The final budget increased per-student funding by 3 percent, compared with a 1.5 percent increase in the proposed budget. The money added by the Council drove an additional $18.8 million dollars to schools. Overall, general funding for DCPS and public charters grew by $127 million from the approved fiscal year 2017 budget to fiscal year (FY) 2018.[1]

Although this increase is impressive, the final education budget is still insufficient to meet the educational needs of DC’s children and youth. The increase falls short of the level recommended for this year by a DC government workgroup, and remains well below what schools need to prepare all PreK-12 students for success, according to an expert study.[2]  In addition, most of the new money this year is needed just for increasing enrollment. Adjusting for inflation, per-student funding in 2018 will still be lower than in 2009—nearly a decade ago (Figure 1).

This limited funding means it is likely that a problem that has emerged in recent years in DCPS school funding will continue. Almost half of DCPS funds intended to provide supplemental services for “at-risk” students is instead being used to fund basic staff positions across all schools.

Increases of a similar size, or larger, will be needed in the coming years to provide all students with an adequate education and to invest in critical supports for low-income students and students of color.

In DC, school funding starts with a base amount per student, which is then adjusted depending on the student’s grade and characteristics. Schools receive additional resources for students who are English language learners, special education students, or at risk of academic failure.

Increasing the base amount is the best way to give all schools the greatest flexibility to meet increasing need. The final budget will up the base by 3 percent, from $9,682 to $9,972 per student.

This increase is the largest in recent years, but it is part of a trend of modest increases since FY 2010. The base rate was raised either 4 or 5 percent every year from FY 2007 through FY 2009 (Table 1). But for the budgets set after the Great Recession, the rate was increased 2 percent in five years, and not at all in three budgets.

That means that for nearly a decade increases to school funding have not even kept pace with the rising cost of living (Figure 1). Consequently, schools and teachers do not have resources on par with what they had nine years ago to invest in the success of their students. 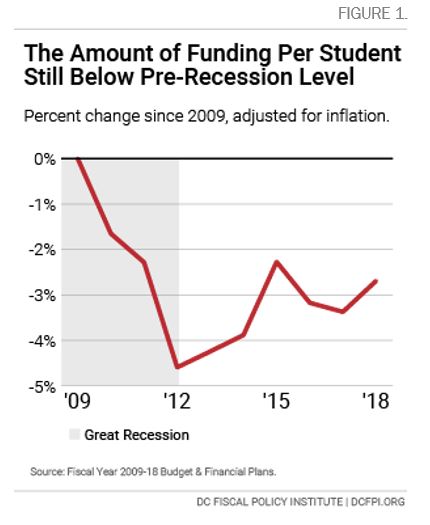 Importantly, even with an increase, the per-pupil funding level is well below what it actually costs to meet high quality standards and ensure all students succeed based on the 2013 DC Education Adequacy Study commissioned by the government.[4] That data-driven analysis found that a real investment in PreK-12 students requires a base rate of $11,125 per-pupil in inflation adjusted dollars, rather than the $9,972 allocated.

In order to make meaningful progress towards closing the gap between what we invest and what’s needed, a mayoral-created working group[5] recommended a 3.5 percent increase in per-pupil funding in the FY 2018 budget. The final increase of 3 percent, while substantial, still fell short of the recommended amount. (Figure 2). 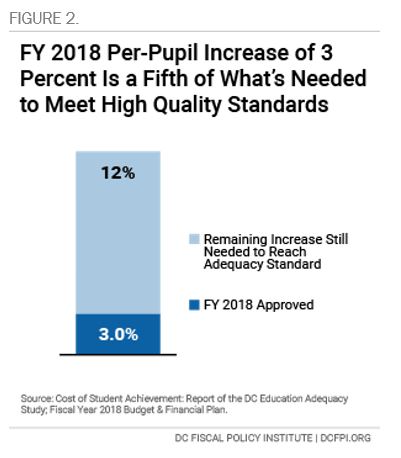 In the final budget, an estimated $81 million of the $127 million in new dollars for schools is needed just to meet rising enrollment in DCPS and public charter schools.

Increasing public school enrollment is good for District families, our economy, and our future. Student enrollment in DCPS and public charter schools has been steadily increasing for eight years, with an estimated 94,603 total students projected to enroll next year. Overall school funding has also increased for eight years, because schools receive funding on a per-pupil basis, to reflect the larger number of teachers and textbooks needed.

Most of the growing enrollment is in public charter schools (Figure 3). Public charter school enrollment will rise by 7 percent next year, whereas DC Public Schools will increase by 4 percent. There are 2,870 new students projected to attend public charters and 1,732 new students to join DCPS. Correspondingly, the budgets of Public Charter Schools and the Public Charter School Board grew substantially, by 10 percent and 11 percent respectively (Table 2). 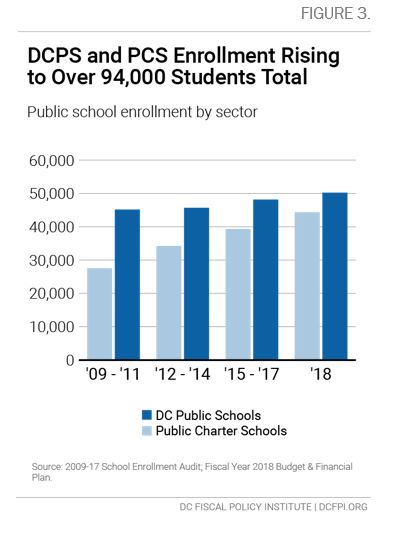 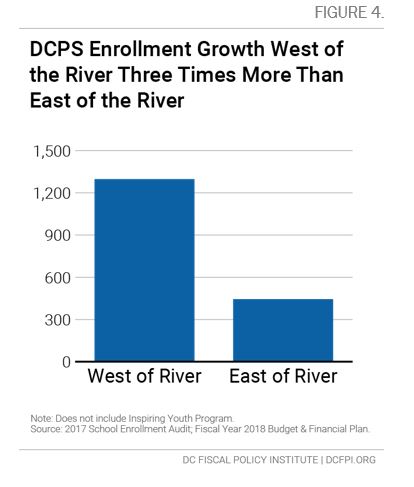 Both DCPS schools and public charter schools receive an additional $2,184 per student for low-income students and other students at-risk of falling behind academically. ‘At-risk funds’ are supposed to help schools provide new resources and expand important services for the most vulnerable students.

Based on the proposed FY 18 budget, DCPS was planning to use nearly half of the dedicated ‘at-risk funding’ to pay for core functions instead of supporting additional, targeted resources like afterschool programs and evening credit recovery (Figure 5).[6] Many Public Charter Schools have had to use the new funds to replace lost summer school funds. 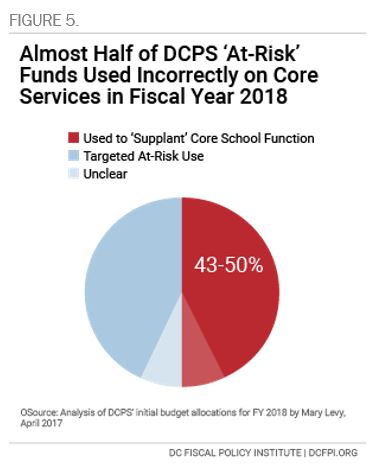 Schools must be adequately funded so that basic needs are met, without having to tap at-risk funds. DCPS will submit a report to Council on September 1, 2017, detailing how they will allocate the additional funding in the final FY 18 budget. Hopefully, much of it will be used to prevent the misuse of at-risk funding.

The failure to maintain base per-student funding, noted earlier, contributes to the inability to fully use at-risk funds for supplemental services. In this way, the inadequate school funding limits the ability of schools to close the large achievement gap between low-income students and higher-income students.

There is $95.2 million in the FY 2018 budget for both DCPS and public charters to serve at-risk youth. It is likely that the problematic funding of core positions with at-risk money will continue.

Although attempts have been made to make school budgets more transparent in recent years, tracking the allocation of funds remains difficult, and particularly so for at-risk funds. In addition, while school leaders and Local School Advisory Teams are expected to play a role in shaping their school’s budget each year, the lack of transparency over at-risk funds does not allow them to engage in meaningful discussions over how to use these funds to improve student outcomes.  Given the importance of at-risk funds, parents, school leaders, and the general public should have clearer guidance and more flexibility in determining the best use of at-risk funds at their school.

Why At-Risk Funding Matters in DC

An estimated 43,579 students DC students qualify for at-risk funding in 2018 because they are a foster care student, experiencing homelessness, overage for their grade, or their family receives TANF or SNAP

This means that about half of DC students are at risk of falling behind academically, most growing up in families struggling to make ends meet (Figure 6). 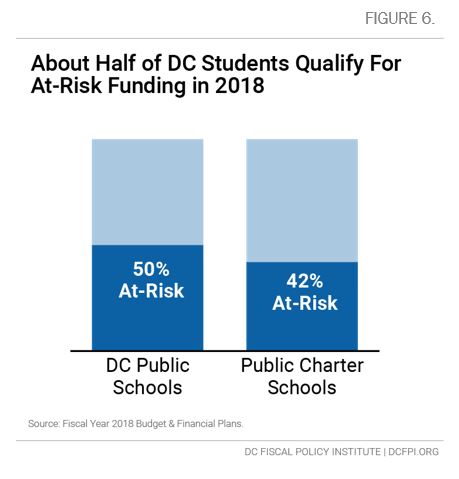 At-risk dollars are important because they are a way to direct resources towards closing both economic and racial disparities in student outcomes. The District is marked by substantial income inequality and by geographical separation of low-income and high income students. Both of these affect the ability of schools and students to succeed.

Economic and racial injustice are distinct and yet intertwined, compounding in ways that leave poor black and latinx students paying the price. There are deep and persistent achievement gaps between students of relative wealth and economically disadvantaged students. There are also deep and persistent achievement gaps between white students and students of color (Figure 8).

Addressing these inequities requires targeted resources. The at-risk funding supplement is intended to give schools a powerful tool to do that. Schools should be able to leverage this money to serve the specific needs of at-risk students. Its importance is underscored by the recent report that illustrates how the parents of wealthier DC students compensate for inadequate school funding by raising significant sums of money for their child’s school.[7] 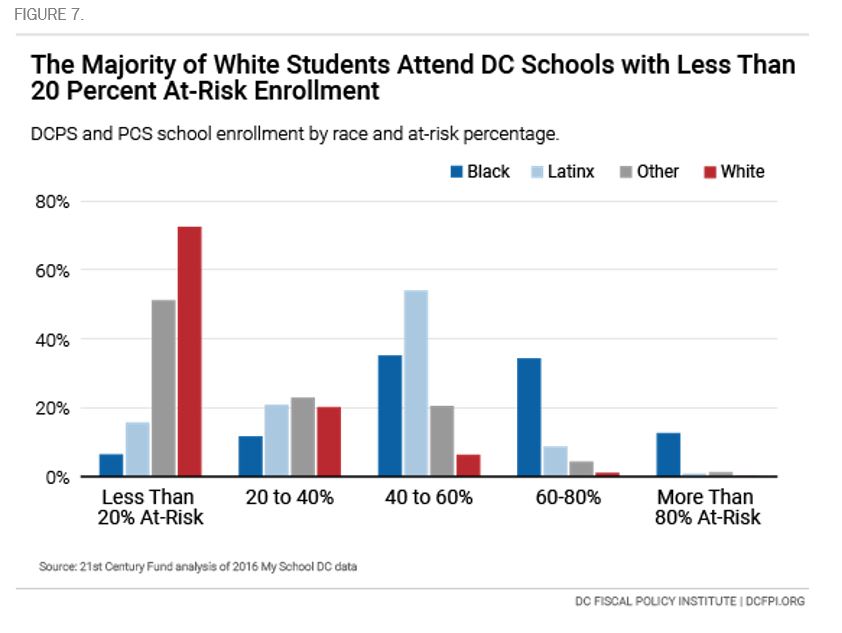 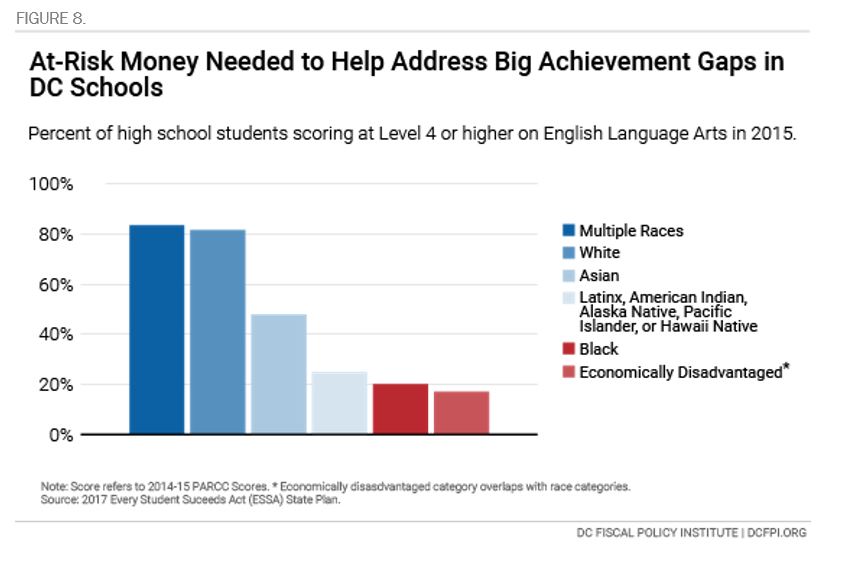 Achievement gaps arise, in part, through opportunity gaps. Every parent wants the best for their child, but not all parents have the means to pay for enriching after-school activities. Expanded learning programs that occur outside of a traditional school day allow experiential learners to thrive, exposing students to arts, athletics, technology and applied science, with demonstrated payoffs in classroom performance.[8]

Mayor Bowser and DCPS announced that some of the limited new money for DCPS schools will increase extracurricular options in middle schools, with the goal of providing every student with at least one option. Specifically, $3.5 million will be used for this purpose.[9]

However, DCPS also stands to lose over 2,000 afterschool seats, largely due to a reduction of the student-to-staff ratio from 20 students per teacher and aide to 15, without sufficient funding in the proposed budget.[10] DCPS needs to allocate additional funding to retain the same number of seats with smaller student-teacher ratios.

Steep declines in grants for community based organizations over the last few years will also compound the shortage of afterschool opportunities for District students next year. Using FY 2010 as a yardstick, there were once 9,665 youth who had the opportunity to grow from these programs.[11] In FY 2017, the programs had dwindled to a quarter of that (2,465 slots) because funding had been slashed by 63 percent (Figure 9). In FY 2017 there were the fewest after-school slots in the schools with the highest at-risk enrollment.[12]

The FY 2018 budget keeps funding for expanded learning at the FY 2017 level. This means that access to after-school programming will continue to be limited for low-income students.

The FY 2018 budget should have at least restored funding back to FY 2010 levels in order to help move the District towards a system of expanded learning to scale with the needs of a city responsible for the education of 43,579 at-risk students.

The Challenges of Modernizing and Maintaining School Facilities

Building and maintaining safe facilities for learning is a big driver of costs in education budgets. For both DCPS and public charters, the Uniform Per Student Funding Formula covers utilities, custodial, routine maintenance and minor repairs. But the long-term costs of major modernizations, new construction, and acquisition of land or buildings is managed very differently, with each sector facing its own challenges.

DCPS capital renewals, like the replacements of new roofs, and systems-wide technology upgrades are managed by the Department of General Services (DGS). The operating budget for school maintenance within DGS decreased by 6.6 percent, after adjusting for inflation. 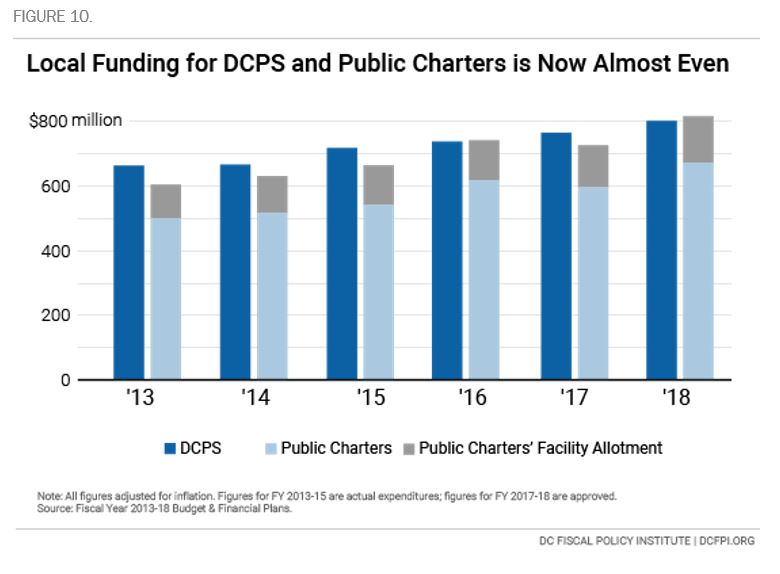 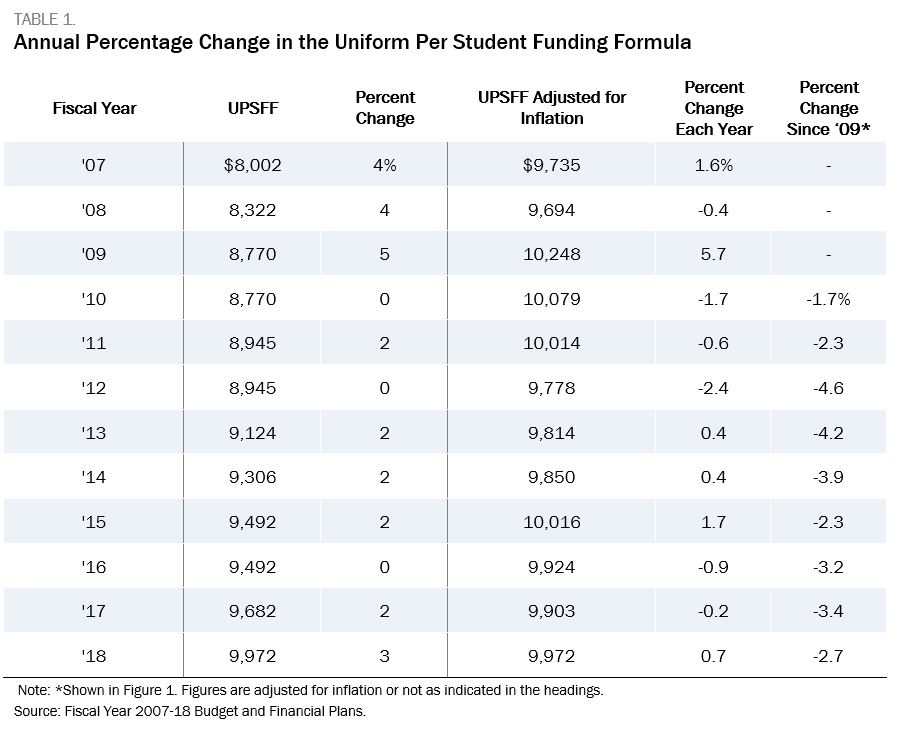 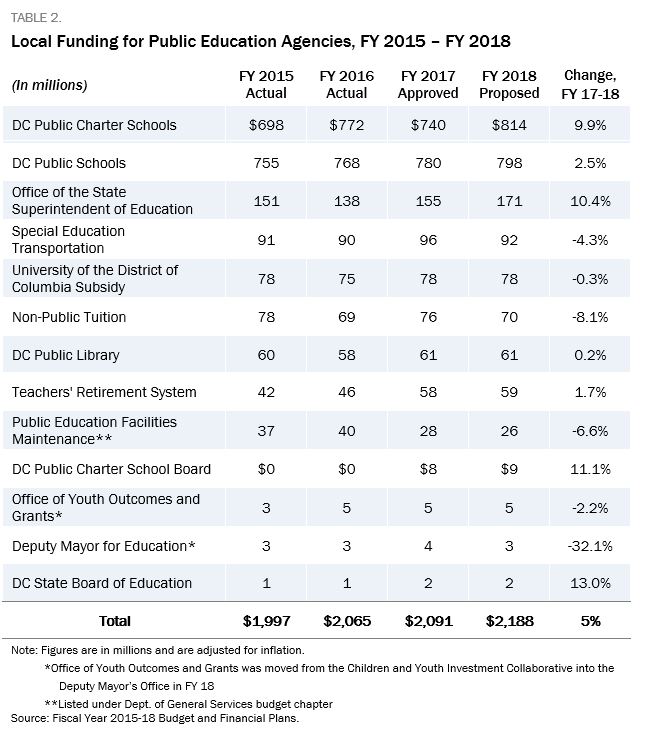 [3] In April 2017, the approved fiscal year 2017 budgets for DCPS and PCS were revised and increased by $27 million each to cover teacher salaries and higher than expected enrollment and special education costs. The $127 million dollar figure is measured from the 2017 approved budget and includes both local and special purpose revenue, as well as the public charter facility allowance.

[11] The year after the Wallace Foundation withdrew support.