The Universal Paid Leave Act (UPLA) passed last year by the DC Council guarantees that people who work in DC can take time off from work, with pay, when they need to be with a new baby, care for an ill relative, or address their own health need.[1] The program, designed in conjunction with national experts, uses a proven “social insurance” model like Social Security, which results in low administrative costs, very limited administrative burden on employers, and a transparent system for both workers and their employers.

Despite UPLA’s many advantages, several bills have been introduced to “repeal and replace” it. Most of the alternatives focus on an “employer mandate,” where employers provide the benefit directly rather than through a public fund. A review of the alternatives shows that an employer mandate undermines each of the advantages of UPLA: easy access to benefits for workers, predictable costs for businesses, and low administrative costs.

UPLA uses a social insurance model, like Social Security and Unemployment Insurance, which has been tested and proven to work. Under UPLA, all private-sector employers in the District will pay a fixed payroll tax into a government-run fund to cover the cost of benefits for their workers. When workers experience a qualifying event—welcoming a new child into their families or addressing their own or a family member’s serious health condition—the employee comes off the company’s payroll, and receives wage replacement from the public fund. The agency administering the fund is responsible for processing claims and paying benefits.

This structure is beneficial in several ways:

In addition, DC’s Council Budget Office found that the District can implement UPLA without affecting the ability of businesses and the DC economy to thrive. Their thorough analysis concluded that the economy will be 99.9 percent as large as it would be without UPLA, and that the adopted program is “unlikely to alter the current upward trajectory of the District’s economy.” A universal program also minimizes cost, increases employee morale, and reduces turnover.[2]

For these reasons, all of the states that currently offer paid family and medical leave use this structure.

Several alternative legislative proposals were introduced in the DC Council this year, with the intent to “repeal and replace” UPLA. All alternatives offer the same benefits as UPLA, but would provide them in very different ways.

A close review of the alternatives raises a number of concerns: an employer mandate would likely be bad for workers, bad for many businesses, and have much higher administrative costs. As shown below, an employer mandate undermines each of the advantages of UPLA: easy access to benefits for workers, predictable costs for businesses, and low administrative costs.

Below is a summary of the most significant concerns with an employer mandate or hybrid approach. (It should be noted that there are other details of the individual bills that are also problematic. A full chart including the full details of each proposal, and how they compare to UPLA, is available here.)

An Employer Mandate Is Bad for Workers

Under an employer mandate, employees request paid leave from their own employer, rather than filing a claim for benefits with a neutral government agency under UPLA. This is problematic because the employer will have incentives to deny claims. Think of the way for profit private health insurance coverage works—in which it can be quite common for workers’ benefits to be denied—versus the way that Social Security benefits are administered, in which retirees rarely have a problem receiving their payments. In addition:

An Employer Mandate Is Bad for Many Businesses

It is unclear whether an employer mandate would be any less expensive for employers than UPLA, especially since both plans require larger employers to pay a tax and pay the full costs of benefits themselves. And there is a substantial risk that an employer mandate could be costly and unpredictable for many businesses. The risks are especially great for small and mid-sized businesses. 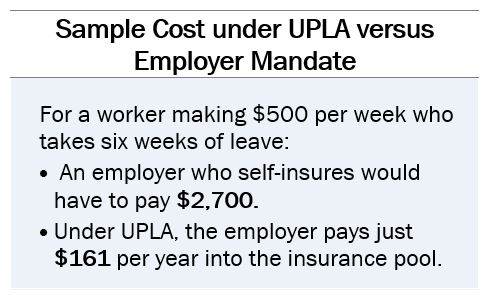 An Employer Mandate Is Bad for Program Administration and Costs

Administration of a paid leave program has three general cost categories: processing benefit claims, the cost of education and enforcement of the law, and infrastructure/IT costs. Under UPLA, all costs have been calculated and fully accounted for— and the administrative and education/enforcement costs are embedded as part of the 0.62 percent payroll tax. Under the alternative proposals, the total costs have not been calculated, and these total costs are likely to be the same or much higher than those under UPLA:

For the reasons expressed above, the universal social insurance model created under UPLA is the structure that makes the most sense for workers, businesses, and the broader DC economy.

[5] DCFPI, DC Jobs with Justice, and the Kalmanovitz Initiative at Georgetown University. 2015. Unpredictable, Unsustainable: The Impact of Employers’ Scheduling Practices in DC.