A strong Metro system is important to all of us in the Washington region. It is fundamental to a healthy economy and our area’s good quality of life, by helping workers get to their jobs, supporting our tourism industry, making it easy to get to a restaurant or a ballpark, and reducing traffic congestion. And everyone agrees that the Metro system needs new resources to rebuild its health. But a regional sales tax—a widely discussed option—would be an unfair way to pay for it. A sales tax would ask struggling families in the Washington region to bear the largest responsibility for improving our transportation system, while leaving businesses and high-income households largely off the hook. The sales tax should be rejected as a Metro funding option. 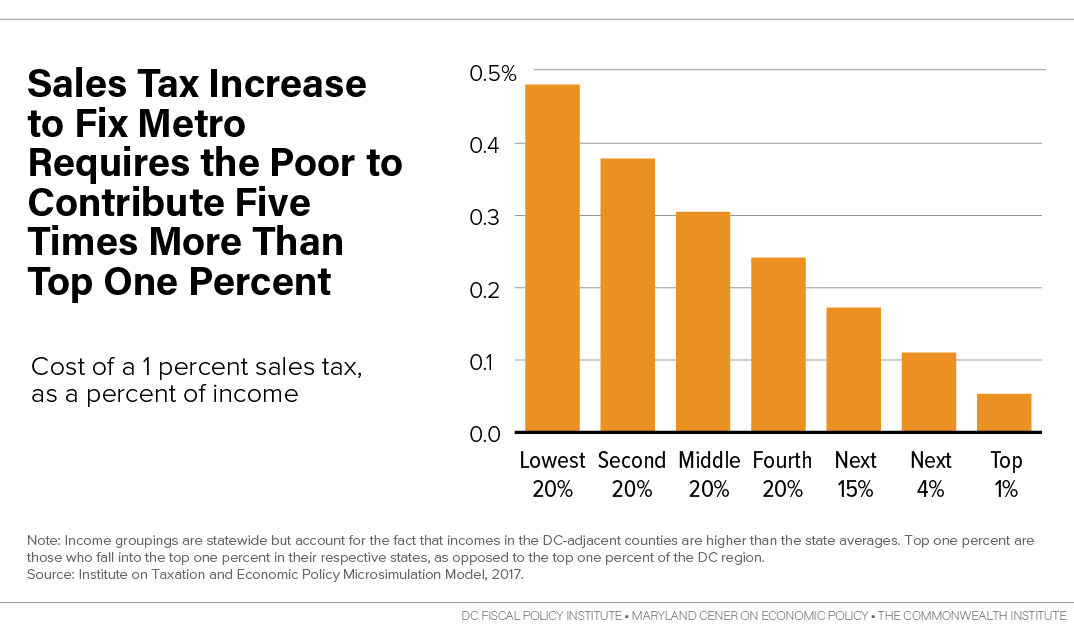 The impact on family income of a 1 percent regional sales tax—a widely discussed Metro funding option—would be five times greater for the lowest-income families in the region, as a share of their income, as it would be for the richest families.

This is because sales taxes always fall more heavily on those living on low incomes. Because families struggling to make ends meet or relying on limited benefits like Social Security must spend every dollar they take in they end up devoting a larger share of their income on purchases subject to sales tax. Put simply, buying things like shampoo, household cleaners, clothes and school supplies takes up a large share of the income for families with limited incomes, while barely registering on the budgets of the well-off or businesses who benefit substantially from a functioning transit system.

Finding a fairer way to fund Metro is a matter of both economic and racial equity. It does not make sense to add an extra cost to families who already struggle from stagnant wages, rising housing costs, and Metro fare hikes and service cuts. Black and Latino families are more likely to be living on low-incomes than white families, which means that a sales-tax approach would ask communities of color to devote a greater share of their incomes towards fixing Metro.

An equitable approach to funding Metro investments would focus on those who most benefit from a strong regional economy and who have the most ability to pay: larger businesses and higher-income households. A sales tax approach, by contrast, largely lets these groups off the hook.

To avoid falling to the sales tax as the “least common denominator” approach, the best solution to funding Metro is to set targets for each jurisdiction and then allow them to find their own way to meet those targets. Ideally, each jurisdiction will then choose to fund Metro with a set of revenue sources that includes both large businesses and higher-income households.

An equity-focused approach to fixing Metro also means that it should be done with no or minimal cuts to services, no or minimal fare increases, and without sacrificing the wages and benefits of Metro workers.

Finally, the proposal by Metro’s General Manager to limit operating budget increases to 3 percent a year—as a tradeoff for getting new funds—is a risky approach that is likely to lead Metro to new problems before long. A 3 percent growth rate is unlikely to be sufficient, year in and year out, to support Metro’s maintenance needs and basic costs of operations. A 3 percent cap could thus force Metro, in a short amount of time to shortchange maintenance, raise fares or cut services, or look for employee concessions. A 3 percent goal can be established but should include flexibility to go above that should a clear need be demonstrated.