Chairman Evans and members of the committee, thank you for the opportunity to testify today.  My name is Jenny Reed and I am the Policy Director at the DC Fiscal Policy Institute.  DCFPI engages in research and public education on the fiscal and economic health of the District of Columbia, with a particular emphasis on how policies impact low- and moderate-income families.

I am here today to testify on some of the proposed tax changes in the fiscal year (FY) 2015 budget.  More specifically, I am here to testify in support of the Mayor’s proposal to create a new tax bracket for middle-incomes, as recommended by the D.C. Tax Revision Commission, and to maintain the top rate on incomes over $350,000 (or $700,000 for a two earner family).

I also want to ask that the Council fund two important tax changes in the FY 2015 budget that were recommended by the tax commission: an expansion of the Earned Income Tax Credit for childless adults and an increase in the income tax standard deduction.  These are not in the mayor’s proposed budget but were placed on the budget’s “wish list,” or contingent priority list. 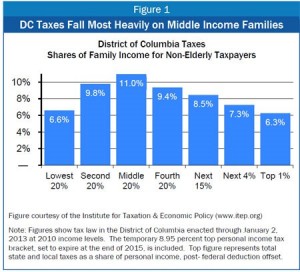 A major focus of the commission was to correct DC’s unbalanced tax system.  Middle income residents pay a far higher share of their incomes in combined sales, property and incomes taxes than higher-income residents. (See Figure 1)  The proposed FY 2015 budget would start to address that imbalance by including a new tax bracket for moderate- and high-income households and maintaining DC’s top tax bracket for incomes over $350,000, both of which are supported by DCFPI.  More specifically:

Maintaining the top rate would generate a substantial amount of revenue relative to current law ‘ $20 million per year starting in 2016 ‘ that helps to offset the cost of reducing taxes on middle income residents starting in FY 2016.