The District should use the fiscal year (FY) 2021 budget to address inequities in access to health care, by removing barriers put in front of immigrant families and individuals. DC imposes a shorter-than-normal recertification period, among other barriers, in the DC Healthcare Alliance—a program for low-income residents that primarily serves immigrants. These barriers contribute to both poor health outcome and unnecessarily high program costs. Removing them is important to ensuring access to health care for all DC residents—and to making the Healthcare Alliance a more effective program.

The District should invest at least $25 million to eliminate access barriers in the Healthcare Alliance. The added costs reflect the fact that more residents would have health insurance once the barriers are removed.

In 2011, DC implemented restrictive procedures residents had to follow to maintain their Alliance eligibility, including in-person interviews every six months, which immediately led to a sharp drop in participation (Figure 1). Today, thousands of residents who should have health insurance do not, and the uninsured rate is much higher among Latinx DC residents than others. 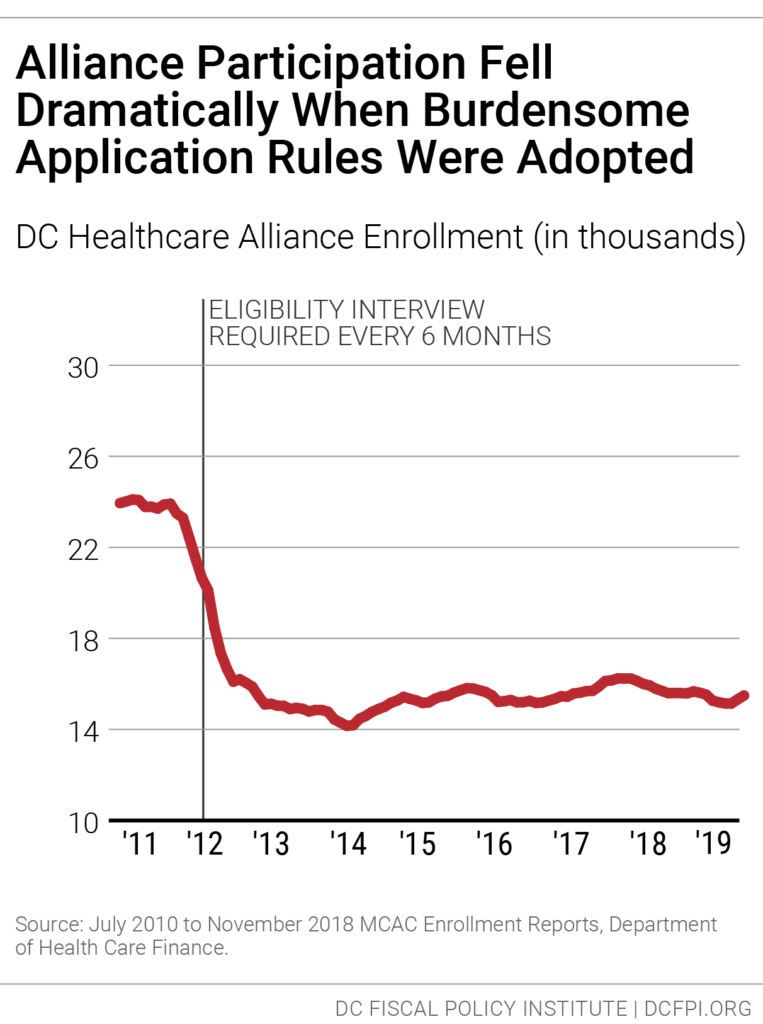 The restrictive rules also contribute to a high rate of turnover in the Alliance, as residents join the program but then drop off, due to the time-intensive requirements. Only 55 percent of Alliance participants renew their eligibility when it comes up, data from the District’s Department of Health Care Finance show. Given that many Alliance members are working at jobs without paid leave and that visiting a social service center can take an entire day or longer, it’s not surprising that many are not able to renew their benefits.

This lack of continuous coverage contributes to poor health outcomes and high costs per-person in the Alliance. Churn from frequent recertification increases health program costs because it limits access to preventive care, which means participants often are sicker when they re-enroll, and because sicker residents are most willing to go through the process of maintaining coverage. Healthcare Alliance costs have doubled in the past four years, even though participation has not grown. The cost increases also appear to reflect other factors, including a growing number of older participants.

The six-month recertification requirement also creates problems for other residents seeking public benefits. Data collected in 2015 suggest that Alliance recipients make up one-fourth of service center traffic in a given month, even though they represent a very small portion of service center clients.[1]

DC Council Should Extend the Recertification Period to One Year

Replacing the six-month in-person Alliance requirement with a one-year recertification requirement would improve health outcomes for DC’s immigrants and reduce monthly per-person program costs as residents receive better care and as healthier residents, currently discouraged from staying on, are able to maintain coverage. Research from Medicaid, for example, shows that average health care costs go down the longer participants have coverage (Figure 2).

The DC Council adopted legislation to replace the six-month requirement, but it hasn’t gone into effect because the Mayor and Council have not provided the funding needed to serve the thousands of additional residents expected to receive coverage. 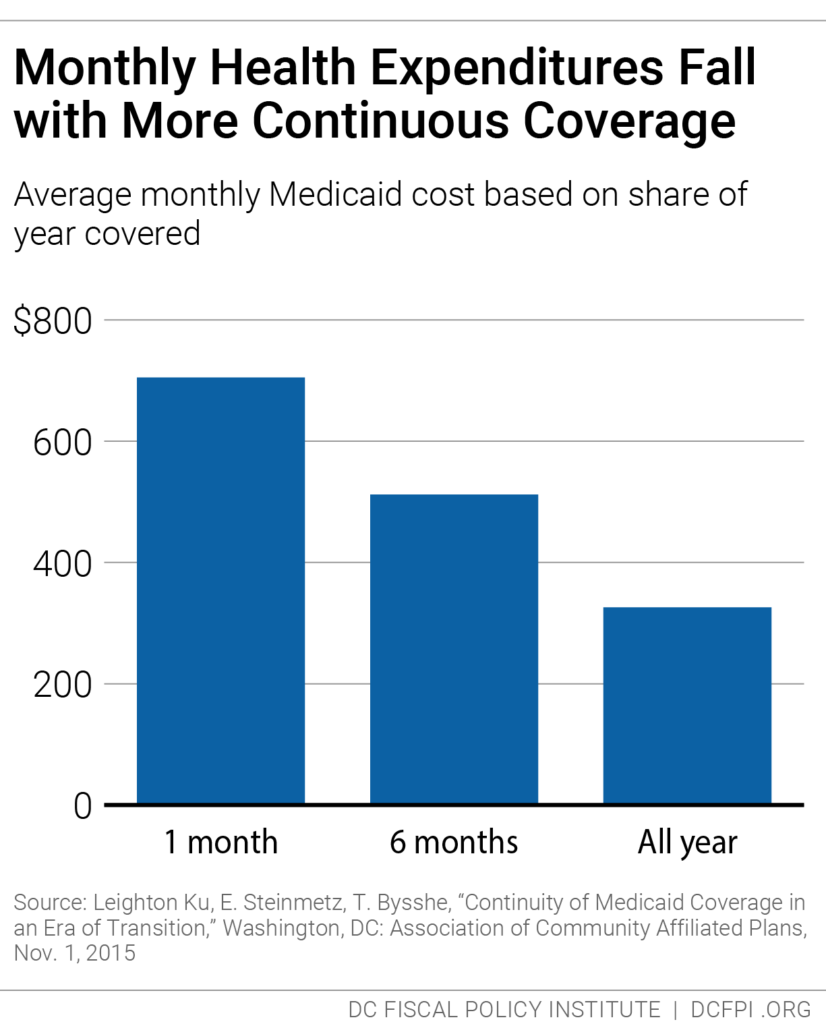 The upcoming FY 2021 budget gives Mayor Bowser and the DC Council an opportunity to make the Alliance a more effective health care program—and to improve health outcomes for DC’s immigrants. DC has been a leader in expanding health insurance coverage to improve resident health and reduce health disparities. Eliminating barriers to care is a critical component of those important city goals and would go a long way towards affirming support for our immigrant neighbors.

The District should invest at least $25 million to eliminate access barriers in the Healthcare Alliance. The added costs reflect the fact that more residents would have health insurance once the barriers are removed.