While the District’s economy may appear to be strongly recovering from the recession, a look below the surface reveals a much more troubling trend: the number of people living in poverty has risen by more than 25 percent since 2007. The rise is driven largely by a sharp jump in the number of people living in deep poverty, or on less than $12,000 a year for a family of four.

At the same time, the data show a significant rise in the income for the typical DC household. In 2013, median household income was $68,000, a $6,500 increase since the start of the recession. Incomes are also rising for higher-income households. The rise in poverty amidst income gains for others reveals that DC’s economic recovery isn’t reaching a growing number of DC residents. This disparity largely reflects falling wages and a scarcity of jobs for residents without a college degree, which are making it harder for many residents to maintain the foothold in the District.

Several groups of residents are being left out of the District’s economic recovery. Black residents, residents without a college degree and residents living in the Northern and Eastern parts of the District faced significant jumps in poverty since 2007. And only White, non-Hispanic residents have seen income gains since the recession. 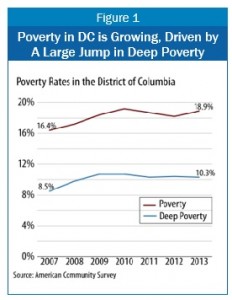 Poverty Is On the Rise for Many DC Residents

The new data also show that the increases in poverty are being disproportionately felt by some groups of residents.

Residents with a high school diploma or less saw a more than a 30 percent increase in poverty since 2007.  Poverty rates for those with some college or a bachelor’s degree or higher were not statistically different from 2007.

Poverty rose the most in an area largely comprised of northeast DC. There, poverty has risen to 19 percent, an astonishing 50 percent increase since 2007. Poverty rates continue to remain highest in an area that largely encompasses Wards 7 and 8 in DC where more than one in three residents lived in poverty in 2013. This represents a 25 percent increase in poverty since 2007. Poverty has fallen by the greatest amount in an area largely comprised of the center part of the District. There, poverty fell to 16 percent in 2013, a drop of nearly one-third since 2007.