The proposed budget would substantially increase income assistance to poor families with children over the next three years. This is a positive step that would help parents in deep poverty provide a more stable environment for their children. It is an important move because benefits in DC’s TANF program have remained flat for the last five years in the midst of the city’s rapidly rising housing costs. 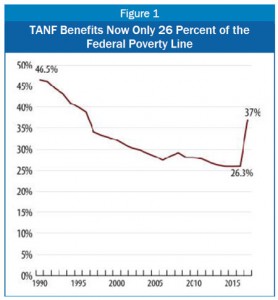 Yet nearly all of the proposed increase would have to wait until FY 2017 — more than two years from now — with only modest increases in 2015 and 2016. It would be better to implement the increase evenly over the next three years, including a notable increase in FY 2015 to provide families with immediate assistance.

DC’s Temporary Assistance to Needy Families program provides just $428 a month for a family of three, bringing families to just 26 percent of the poverty line (see Figure 1). Even counting SNAP benefits (food stamps), families have income of only 59 percent of the federal poverty line.[1] This threatens the future success of the one-third of DC children living on TANF assistance. New neuroscience research shows that poor children are more likely to suffer from “toxic stress” that disrupts the development of the brain, leading to lifelong negative impacts.[2]

But given the clear inadequacy of the District’s current benefits and the continuing disappearance of low-cost housing, the District should implement the increase evenly over FYs 2015 through 2017 rather than waiting more than two years for the bulk if the increase. This would mean raising benefits to about $500 per month in 2015, which is consistent with legislation introduced last year to raise benefits 15 percent. This would allow the District to get an immediate start to improve family stability, reduce the negative effects of poverty and help ensure a brighter future for DC’s kids.

[1]The Value of TANF Cash Benefits Continued to Erode in 2012 by Ife Finch and Liz Schott, Center on Budget and Policy Priorities. March 2013. www.cbpp.org/files/3-28-13tanf.pdf

[3] The Foreseeable Harm from Governor Brown’s Proposal to Reduce CalWorks Grants for Children by Michael Herald and Jessica Bartholow. March 2011.