The Earned Income Tax Credit (EITC) and the standard deduction are two of the most effective tools to target income tax assistance to low-and moderate-income DC families. That’s why the DC Tax Revision Commission recommended that each be expanded to help to correct DC’s unbalanced tax system, which leaves middle-income families paying more of their income in DC taxes than higher-income households.

Unfortunately, Mayor Gray did not include these recommendations in his proposed fiscal year 2015 budget, although they were put on a wish list that would be funded if revenues next year exceed current projections. Instead, the proposed budget includes other commission recommendations, including a cut in the income tax rate that is not as well targeted on the working poor. As the Council works to modify the proposed budget, we hope the EITC and standard deduction move from the wish list to reality. 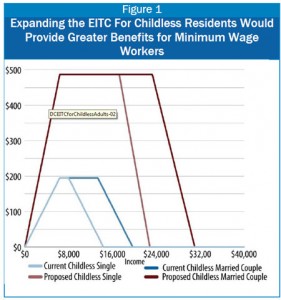 Expand the EITC for childless workers. The District offers one of the most generous state EITCs in the country. The EITC is refundable, meaning that if the credit exceeds the amount of income taxes owed, the excess is given as a tax refund.

However, the DC EITC for workers without a child in the home is small — a maximum of only $195 — and workers get no EITC if they earn more than $14,000. A single worker working full time at the new minimum wage of $11.50 would not be eligible for the credit.

The Tax Revision Commission recommended increasing eligibility for the credit to 200 percent of the poverty line, or about $23,000 a year, and raising the maximum credit to almost $500. A childless worker employed 30 hours per week at $11.50 an hour would get an EITC of $450 —   offsetting 90 percent of her or his income taxes.

The Commission recommended raising the DC standard deduction to the federal level, or $6,100 for singles and $12,200 for married couples filing jointly. The change would largely benefit low- and moderate-income households, since two-thirds of those who claim the standard deduction have incomes below $75,000. (Higher income families tend to itemize.) The increase would also boost the effectiveness of the Earned Income Tax Credit for all low-income filers, as a higher deduction would exempt more income from tax and increase the amount of EITC refunds.