New data released today from the Census Bureau’s American Community Survey reveal that the aftermath of the Great Recession continues to hit certain groups of DC residents much harder than others, even amidst signs of economic recovery for the city as a whole.  While the District continues to grow, it also is becoming more divided economically among residents.

Poverty in DC rose from 16 percent in 2007, the last year before the recession began to impact the District, to 19 percent in 2011. This means that in 2011, some 109,000 residents lived below the poverty line, or $23,021 for a family of four.  Yet, at same time, median income for the District — the income of the household in the middle of the income distribution ‘ rose nearly 8 percent, from $58,700 to $63,100, after adjusting for inflation to equal FY 2011 dollars, over the same time period (Unless otherwise noted, all figures are adjusted for inflation to equal 2011 dollars).  The fact that poverty and median income grew simultaneously suggests that as the District begins to grow and recover from the recession, it is doing so in a way that is leaving many groups of residents behind. 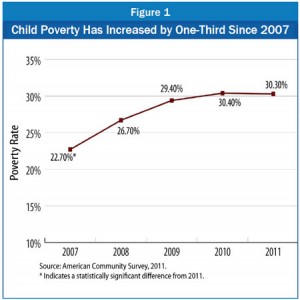 Differences in the poverty rate and median household income citywide between 2010 and 2011 were not statistically significant due to large margins of error with the data.

The Recession Continues to Impact Certain Groups of DC Residents

Poverty among Black District residents increased from 23 percent to 28 percent over the four year period.  The poverty rate among Hispanic residents rose even more sharply, from 11 percent to 18 percent.  At the same time, the income for the typical Hispanic household grew from $45,000 to more than $59,000.  These findings may suggest economic disparities within the District’s Hispanic population.  For example, it may indicate that while middle-income Hispanic households in DC are doing better in 2011 than in 2007, it also suggests that significant share of low-income Hispanic residents have fallen below the poverty line.  Meanwhile, poverty among White, Non-Hispanics stayed relatively unchanged over the same time period and stood at 7 percent in 2011.