Black residents in the Washington region have a much harder time finding a job than white residents ‘even when they have a college degree.  And the gap in earnings between white area residents and Black and Hispanic residents is growing. This suggests that policymakers need to focus not only on improving education and training, but also on efforts to help connect residents with jobs. 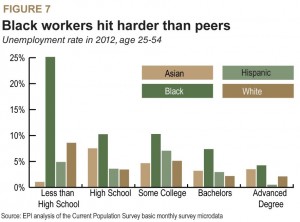 It is not entirely clear why Blacks are facing a harder time in the region, but certainly discrimination and a lack of access to opportunities play a role.  A recent study in Baltimore, for example, that followed nearly 800 low-income school children for nearly 30 years found higher employment levels among White men without college degrees than Black men without college degrees. One of the reasons? Many more White men were able to secure well-paying industrial jobs due to connections from friends and family in the industry.

With many Black residents being left behind in the region, policymakers should look to solutions that can help improve access and opportunity for them.