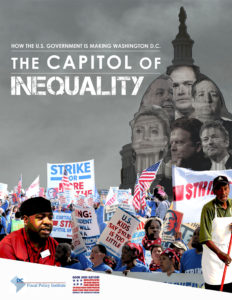 This report finds that:

Federal contract employees’ wages should be boosted so that these workers can adequately provide for their families. Specifically, the President can issue an Executive Order granting contracting preference to companies that pay at least the living wage for the local region.

This would not only improve the standard of living for some 24,500 workers in the District of Columbia, but will also help thousands more federal contract workers throughout the nation.