The annual audit of the District’s finances is out, and it shows a $287 million increase in the city’s fund balance in 2017. This balance represents DC’s accumulated monetary assets, including various reserve funds – a mix of federally-required and locally-controlled rainy-day funds to help DC manage its bills. According to the audit (called the Comprehensive Annual Financial Report, or CAFR), the city’s fund balance has grown substantially in recent years, from just over $1 billion in 2009 to a record $2.7 billion in 2017 (Figure 1). 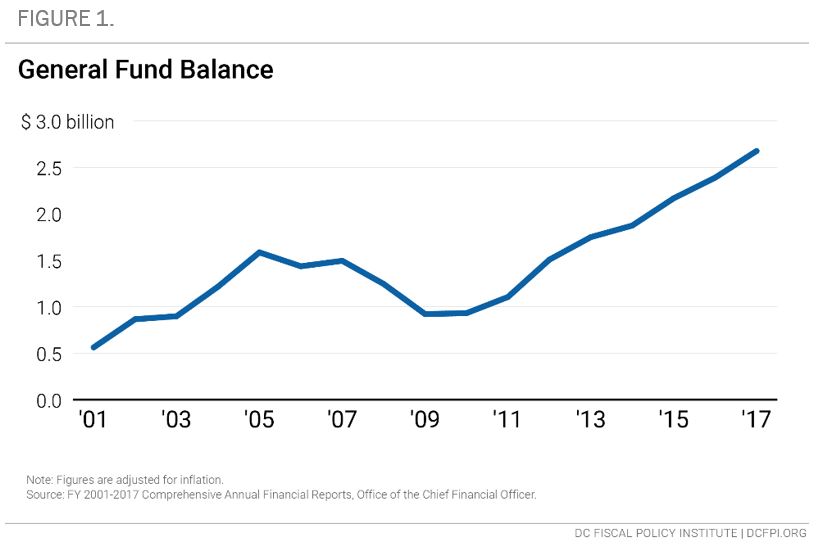 This increase comes from a surplus: in 2017 the city collected more in taxes than it expected and spent less than it budgeted. The size of year-end surpluses is unpredictable, which means that surpluses generally can only be used for one-time expenses such as building affordable housing or schools, rather than ongoing expenses for programs.

Last year the 2016 CAFR recorded a $222 million surplus, with $160 million potentially available for spending. Unfortunately, the surplus was put directly into savings to bring the District closer to its goal of having 60 days of government operations in our cash reserve accounts, rather than put to work making needed investments in our community.

This year was different. While DC continued to put money into our federally-mandated reserves, in 2017 we put no new funds into our local reserves. Instead, much of our surplus went to a part of the General Fund balance that’s “reserved for future budgets.” This fund exists each year and includes things like “rollover” spending from agencies that need more time to use some of the prior year’s funds, and some cushion for balancing the four-year financial plan.

In 2017 the District added more to the “reserved for future budgets” account. This fund grew more than usual this year because $154 million of our surplus flowed into a new “workforce investment fund,” primarily for funding union contracts with public sector workers who have been waiting years for new contracts. Almost $96 million of this was money set aside to fund the new Washington Teacher’s Union contract over the coming years, and other associated costs.

This money comes out of our year-end surplus because the contract was funded with future “unexpected” revenue growth, rather than new taxes or cuts in other spending. Last year the city bet that the Chief Financial Officer had been too conservative when estimating our annual revenue, and that new estimates released in June and September (after the February estimate set the spending levels for the budget) would come in high enough to fund the new contract with existing taxes, without revising the budget.

The bet paid off this time, and we are glad to see the city using surplus funds on an important investment like adequate teacher pay, rather than putting it all into savings while failing to appropriately fund our education system.

However, it is important to remember that surpluses are unpredictable, and dedicating future revenue growth to current needs ties policymakers’ hands and creates problems for future budgets. This is why surpluses are better used for “one-time” expenses, such as creating new affordable housing, building or renovating schools, or improving conditions at shelters for individuals experiencing homelessness.

The Mayor Should Invest in Programs that Boost Incomes and Health