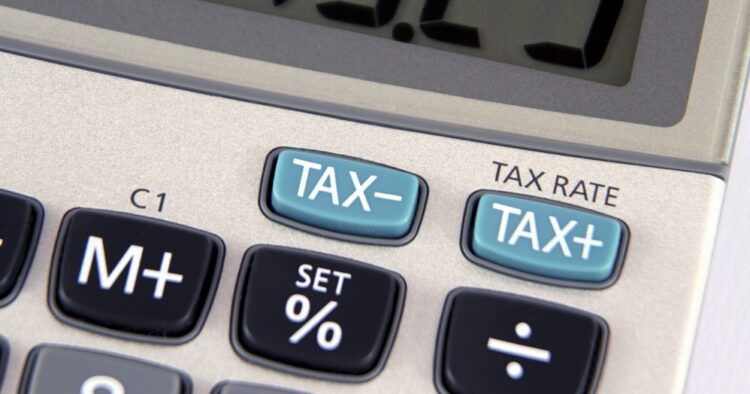 Last week, the DC Council took important steps towards raising revenue for a more just recovery for DC. By cutting and delaying corporate tax breaks, strengthening the estate tax, increasing the gas tax, and a creating a new advertising tax, the Council’s budget raises an additional $61 million to support vital programs and services. Their budget has significant shortcomings even with these modest revenue increases, largely because Council failed to put forward a truly bold revenue strategy in the face of a $1.5 billion revenue shortfall. Shortcomings are also in part related to them voting down a modest personal income tax increase on high-income residents.

When the Council reexamines the budget for a second vote on July 21, they should protect the revenue raisers in the current version of the budget. The Council should also work with the Mayor to use a small portion of the District’s plentiful reserves to provide targeted economic relief to the child care industry and excluded workers.

During the first budget vote, Councilmember Charles Allen proposed two revenue raising ideas: the first, which delays a tax deduction for publicly traded corporations, passed unanimously. The second was a very modest personal income tax increase on residents earning more than $250,000 in taxable income per year that, if passed, would have brought in an additional $7.2 million of revenue next fiscal year. At $14.6 million, the combined revenue from these two amendments would have provided funding for emergency rental assistance, violence interruption, grants for excluded workers, a second grocery store in Ward 8, and programming for at-risk youth. By voting down the personal income tax increase, the Council chose to make significantly smaller, if any, investments in these areas. Table 1 below shows the investments that the modest income tax increase would have funded. 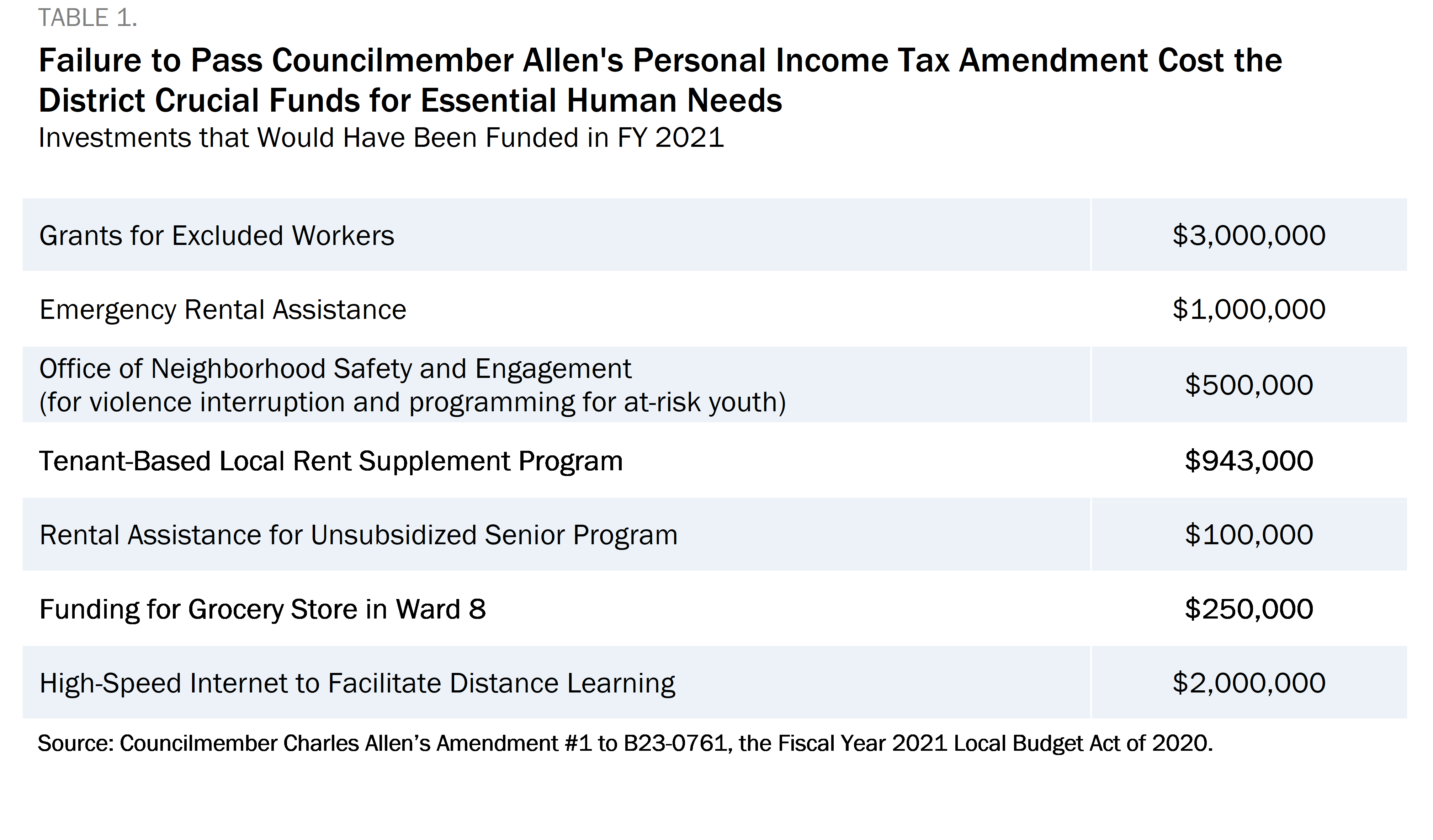 When the Council voted down this revenue raiser last week, some Councilmembers expressed hesitance to raise income taxes on higher-income residents. But they should have approved, and even strengthened, a proposal to raise taxes on the wealthy. For someone earning $350,000, the proposed increase would have been just $125 per year—or about two cups of coffee a month, and higher-income residents would still have been better off after the local tax increase, due to Trump’s significant tax cuts for high-income earners in recent years. Further, the economic downturn has disproportionately hurt low-income earners who are far more likely to have lost income as a result of widespread closures. Wealth and income inequality have only grown as a result of the pandemic, and lawmakers have the responsibility to address the systemic inequities that created these economic conditions.

Voting down the amendment was a missed opportunity for the city’s leaders to build more equity into our tax system. DCFPI is hopeful that councilmembers’ calls for a revenue hearing during the debate will lead to one in the fall after we receive a revised revenue forecast and early in the budget process each year going forward, as we called for in January.

Council Should Use Another $30 Million in Reserves for Pressing Needs

There are still programs and services that remain significantly underfunded in the Council’s budget, and Councilmembers should look to the District’s plentiful reserves to meet some of the most urgent needs. In the proposed fiscal year (FY) 2021 budget, there is significant money left in three of the District’s four reserve accounts, totaling just over $1.2 billion. One reason to accumulate such substantial savings is so that we are able to fund urgent needs in times of emergency. Now is that time.

Childcare advocates estimate that at least $5 million is needed in FY 2020 and $8.6 million in FY 2021 to help stabilize childcare providers facing profit losses and debilitating costs associated with increased staff and sanitation efforts as they begin to reopen. There is also a critical and urgent need for additional funding for cash grants to excluded workers, those who are ineligible for unemployment and other federal relief dollars. Excluded workers are asking for an additional $16 million in lifesaving grants to reach their $30 million ask.

Together, these asks total $29.6 million, just 2.5 percent of the District’s remaining reserves. The Council should work with the Mayor to use a small portion of the reserves to provide targeted economic relief to these businesses and individuals. If they and the Mayor fully fund these asks using the reserves, there will still be $1.17 billion remaining that could be used if the economic crisis worsens. Like with other budget measures, the Chief Financial Officer (CFO) must certify this use of the reserves. In August or September, the CFO is expected to provide an updated revenue forecast; if that forecast shows a significant drop in revenue, the Council should hold a hearing to create a bold revenue strategy and free up future pressure on the reserves. 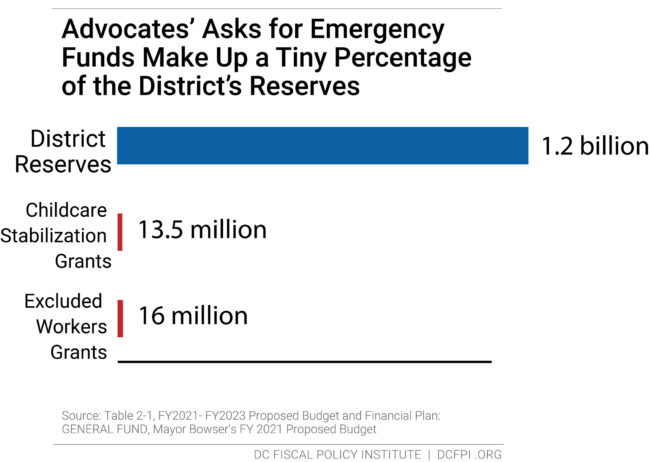 Keep Revenue Raisers in the Budget at the Second Vote

In the first version of their budget, Council raised $61 million through various revenue changes. Chairman Mendelson included provisions in the initial draft of the budget to broaden the sales tax base with a 3 percent tax on advertising and raise the gas tax to 33 cents per gallon, the first effective increase in this tax since 2009. Councilmembers approved  amendments that scaled back corporate tax breaks through an almost complete repeal of the Qualified High Tech Company tax incentive and by delaying the deferred tax liability deduction for publicly traded companies. Another amendment lowered the estate tax exemption threshold from $5.6 million to $4 million.

As their second budget vote approaches, DCFPI urges councilmembers to protect these revenue tools and the essential services and programs that they fund. The economic recovery following the pandemic-related downturn will take at least two years, according to the CFO. In that time, Council must adopt a strong revenue strategy to ensure that the recovery is just and equitable, and eases the economic burden disproportionately borne by low-income District residents.