For those who want to support small businesses and also care about finding sorely needed funding for schools and affordable housing, the good news is there’s a way to do both! The District can move forward with planned business tax cuts, but still save a substantial amount by limiting the tax cut to just small businesses, those who are most likely to be locally owned and most in need of help. Providing a tax cut to three-fourths of DC’s businesses would cost just $7 million, far less than the $28 million cost of providing a tax cut to large corporations as well.

Budget markups at the DC Council are over, yet despite the District’s growing prosperity, many investments that would help DC residents and build a stronger future for the District remain underfunded. The budget fails to fully fund the strategic plan to end chronic homelessness, raise school funding by the recommended 3.5 percent, take families off the housing waitlist, and invest in better child care for low-income infants and toddlers. 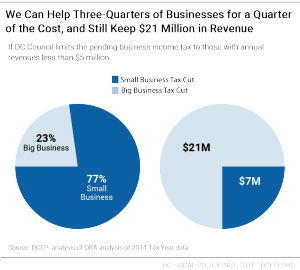 This week, the DC Council will make a choice about how to address these challenges, as they work to complete the budget for 2018. It is very unlikely that Council will find enough money to meet the need without stopping some of the tax cuts. DCFPI and a number of allies have advocated that the Council stop cuts to the estate and business income tax, and redirect that $40 million to investments that will strengthen the District.

In the case of the business tax cut, there’s a possible compromise. DC Council can still save $21 million to invest in critical services, if they simply limit the pending business income tax break to small businesses, those with under $5 million in annual revenue. This would allow the city to support 77 percent of businesses, including the small businesses that are the backbone of many communities, without boosting the bottom line of giant national corporations, like Walmart and Home Depot.

There are other reasons that limiting the tax cuts to smaller businesses make sense.

[1] Case Studies of Business Taxes in the District of Columbia; A Comparison with Neighboring Jurisdictions, Robert Aceituno and Karen Yingst, Councilor Buchanan & Mitchell, P.C., September 16, 2013. The study noted one should not just compare DC’s business income tax rate of 9% with the 6% Virginia rate and 8.25% Maryland rate, because it is an incomplete picture of taxes businesses pay. In particular, Virginia also charges all businesses a gross receipts tax, a tax that DC does not have.