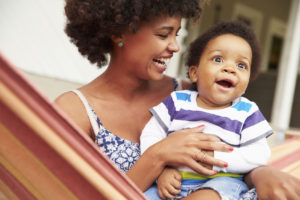 This Mother’s Day, DC Councilmembers have the opportunity to celebrate the District’s mothers, birthing parents, and caregivers through action. They can strengthen our care economy and fund programs that support mothers’ economic security—particularly for the Black and brown mothers who face intersecting systemic oppressions—in the budget that they will give preliminary approval to next Tuesday.

Fifty-six percent of mothers in DC were the primary breadwinners in 2017, and another 26 percent shared that responsibility with a partner. Black and brown women are even more likely to be breadwinners—earning at least half of their total household income—than white women nationally, but they continue to be paid less due to systemic racism including a long history of stolen labor, exclusion and subjugation, and paternalistic policies.

That historic harm is reflected in Black and brown women’s overconcentration in under-paid work like early education, a lower likelihood of having jobs that offer benefits such as health care, and a higher likelihood to be behind on rent. In addition, the pandemic has been crushing for Black and brown women who faced the deepest job losses due to their overrepresentation in the sectors hardest hit by the recession, such as hospitality. In 2021, Black and Hispanic women in DC faced higher unemployment rates, on average, than their male counterparts and white women (Figure 1).

The $19.5 billion spending plan for fiscal year (FY) 2023 should take further aim at longstanding gender inequities. The proposal includes some strong steps forward like an expansion of DC’s paid leave program to provide up to 12 weeks of paid leave and up to two weeks of prenatal leave. It also includes the nation’s first publicly funded compensation program that puts the wages of early educators in child care settings on par with those of public school teachers. This means a significant income boost to a workforce dominated by Black and brown women whose median earnings are just over the minimum wage—far less than their skills and credentials deserve. The proposal also supports mothers’ health by funding a Black maternal health taskforce, home visiting programs, and expansions of family health support programs like HealthySteps.

Council still has time to build on these investments and ensure that some of the most excluded mothers have the income, housing, and health supports they need to make ends meet. For the mothers trying to make a dollar out of 15 cents, the DC Council can honor them by:

Funding these programs would take another step to dismantling the intersecting oppressions that Black and brown mothers face and put the District on a path to shared abundance.