The budget analysis and visualizations for this blog are part of a partnership with the Urban Institute and the Tableau Foundation in an effort to increase transparency around the police budget in the District. 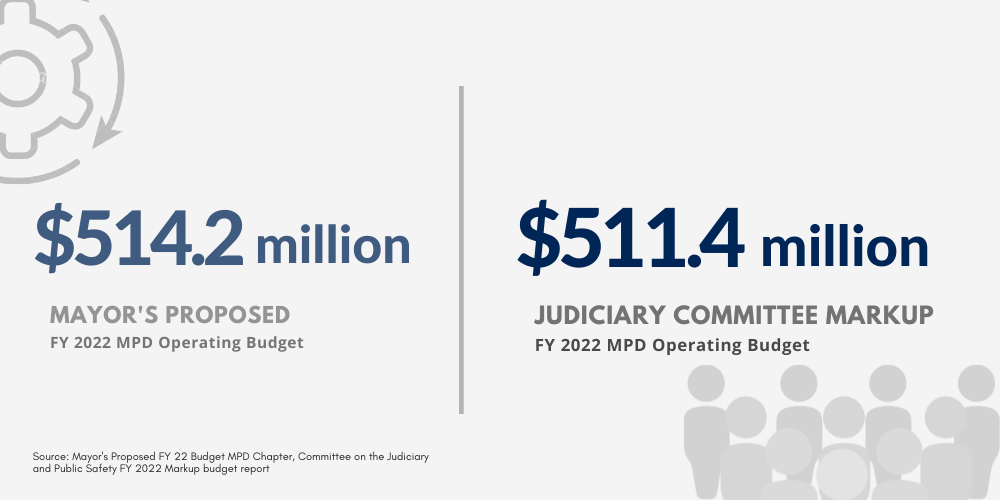 During last week’s budget mark-up session, the Committee on the Judiciary and Public Safety bolstered violence interruption programs and took steps toward removing police from schools; however, they missed an opportunity to divest significantly from policing. The Committee maintained most of the Mayor’s proposed $514.2 million Metropolitan Police Department (MPD) operating budget. While the Mayor’s proposal is $31 million less than what the DC Council approved for FY 2021 (see Figure 1), the difference is a result of MPD’s anticipated rate of attrition that outstrips the agency’s ability to recruit and hire additional officers—not an effort to shift resources away from policing and to other needs. As a result, the DC Fiscal Policy Institute (DCFPI) continues to urge the Council to put forward a police budget that demonstrates an intentional reallocation of resources from policing into systems of community safety and care.

At markup, the process through which the committees make changes to the Mayor’s budget, the Committee approved a $511.4 million operating budget for MPD. The Committee cut the Mayor’s proposed budget—which would have doubled the size of the Cadet program—by $2.7 million or 52 fewer Full-Time Equivalent (FTE) Cadet positions. This reduction—which leaves 150 positions in the program, including 50 new Cadet positions—is the only change that the Committee made to the Mayor’s FY2022 budget proposal. The Mayor’s FY 2022 MPD budget proposal also included funding to hire 200 additional sworn officers on top of new Cadets—another enhancement that the Committee approved.

The Committee’s markup budget also fails to address the lack of transparency in the Mayor’s proposal. The Committee questioned MPD about how it was possible to incur a $31 million budget reduction—most of which came from salaries and benefits—while also increasing the number of FTEs. The agency responded that the budget cut represents vacancy savings coming from roughly 540 unfunded FTE positions. In other words, the MPD budget has funded only 3,460 of 4,000 sworn officer positions. This method of reporting on the budget obscures the actual size of the police force while also allowing the Mayor to reallocate funding for those positions throughout the year, either through underspending within the agency or reprogramming from other agencies.

DCFPI strongly urges the Council to remove these unfunded FTEs from the MPD budget to improve budget transparency and ensure the Council has real oversight of the agency’s size and number of officers.

In Step Toward Equity, Committees Make Critical Shifts Away from Police in Schools

The Committee on Judiciary and Public Safety and the Committee of the Whole (COW)—which has oversight on all DC public education agencies—made meaningful changes to the Mayor’s proposed funding increases in school police at the committee mark-ups. The Committee on Judiciary voted unanimously to phase out and eliminate the school resource officer (SRO) program between July 1, 2022 and July 1, 2025. Meanwhile, the Mayor’s proposal sought only a slight reduction to FY 2022 SRO funding and FTEs. While an important step forward, this change will not begin to take shape until next year. And it is a change that is especially important to Black and brown students, who have been most harmed by the police presence in schools and will return to school disproportionately harmed by the COVID-19 crisis

The COW voted unanimously to eliminate the Mayor’s proposed $1.5 million in federal recovery dollars for de-escalation training for DC Public Schools security guards and MPD in FY 2022 through FY 2024. COW deemed the Mayor’s proposal redundant given existing investments and not being well-designed for meeting the educational needs and well-being of DC residents. Instead, the committee has proposed investing the money in a maternal health bill that is currently unfunded.