This is an important week in the development of DC budget for fiscal year 2018! As of last Friday, each Council committee completed budget oversight hearings on the proposed budget for the DC government agencies they oversee. That brings us to this week — “mark-up week.”

Budget mark-ups are the first sign of how the Council wants to modify the mayor’s budget – perhaps taking up recommendations you and others have made. There will be other chances, too, to influence the budget before the vote on May 30. 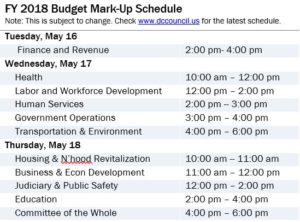 Each committee drafts a budget report and holds a mark-up meeting to vote on it. The committee reports do the following: