The District collected a lot more money than expected in fiscal year 2016, which ended September 30, and that could mean a large budget surplus when the city’s books are audited. The city should use the windfall from its growing prosperity to fund needed services, like affordable housing or start-up costs for a new paid family leave program. That would require changing current rules that put all surplus funds in the city’s savings, which are already at a record high.

DC’s tax collections are rising sharply. DC’s Chief Financial Officer recently announced higher revenues than projections from just a few months ago: an additional $180 million for FY 2016, $36 million for FY 2017, and $20 million in FY 2018 and beyond. 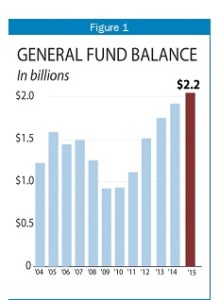 Under current law, all available surplus funds must go to a “working capital” fund. That fund reduces the need for the city to do short-term borrowing in the middle of the year, between major tax collections.

Yet this should not be the only goal for surplus funds, because DC’s savings are at a record high. As of the end of FY 2015, the general fund balance stood at $2.17 billion. The city holds $985 million in reserves, which will pay for 49 days of city expenditures without collecting a single additional dollar.

Meanwhile, the city’s needs are expanding rapidly, and far too many residents are being left behind­­­. Rather than saving 100 percent, some surplus funds could be spent to benefit District residents. Because a year-end surplus is a one-time windfall, it needs to be spent on one-time expenses, rather than things that will have ongoing costs. Some possibilities:

These are just a few of the ways that the District’s surplus could be used to build stronger communities across the city.

We hope that Mayor Bowser will consider revising DC’s surplus policy in her proposed FY 2018 budget, so that some of the surplus can be spent on much-needed programs and services.