These findings highlight the importance of better coordination and planning between the DC public school and public charter school sectors. As enrollment in public charter schools continues to grow, efforts to ensure that students across the city have good access to schools is important.

Key findings from the report include:

Our report also found that improvement is needed in access to information related to public charter school enrollment, despite recent steps taken by the DC Public Charter School Board. Better information is needed, for example, on each public charter school’s grade termination dates — i.e., when a charter school LEA will expand to its highest authorized grade level. In addition, charter school application files prior to 2011 should be posted online, as well as more charter renewal files than the limited number that are currently available. 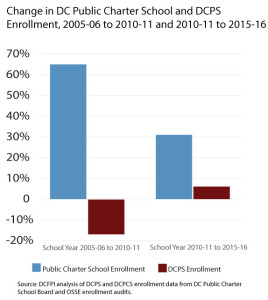