More than 140,000 District residents, which includes half of DC’s children, will have a harder time eating healthy meals this fall. This is because a boost in funding in recent years to the federal Supplemental Nutrition Assistance Program (SNAP), formerly known as food stamps, is set to expire October 31.

This will be a serious hardship for low-income families who already struggle to put food on the table and also pay for rent, transportation, and other basic needs. For a family of three, for example, this will mean a reduction of $29 a month, leaving them with SNAP benefits that average of less than $1.40 per person per meal. 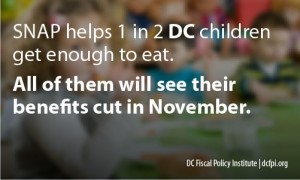 The $15 million cut to SNAP for the District also will have a negative impact on the DC economy, according a new report from the Center on Budget and Policy Priorities. In addition to helping to feed hungry families, SNAP is one of the fastest, most effective ways to help local businesses. Every $1 increase in SNAP benefits generates about $1.70 in economic activity.

The reduction will come if Congress allows the boost in SNAP that was part of the 2009 American Recovery and Reinvestment Act (ARRA) to expire.

The cuts in food assistance come at a time when unemployment in the District remains high in the wake of the recession, especially single-parent families with children and residents without a college degree. The federal SNAP cuts also will come at the same time that the District implements new cuts in cash assistance to families on TANF. Families who have received assistance for more than 60 months will see their benefits cut to just $257 a month.

“Low-income DC residents, and particularly families with children, will soon face new financial struggles,” stated Ed Lazere of the DC Fiscal Policy Institute. “The challenge of feeding a family while also dealing with DC’s high and rising rents will become even greater.”

On top of these across-the-board cuts to the program, the U.S. House of Representatives recently defeated legislation that would have cut $20 billion from SNAP, eliminating food assistance for nearly two million people. That legislation would have provided strong financial incentives to states to reduce their caseloads. This could leave many families and their children without assistance to put food on the table when they need it most. The House is considering and could vote on even deeper cuts to the program in the coming weeks.

SNAP has been a powerful tool in helping to keep families out of poverty. Now is not the time to furthrer reduce this already modest assistance to these struggling families.

The Center on Budget and Policy Priorities’ full report, SNAP Benefits Will Be Cut for All Participants in November 2013, can be found at: http://www.cbpp.org/cms/index.cfm?fa=view&id=3899.