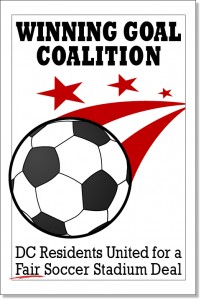 How can the District create a winning deal on the DC United stadium? That’s the focus of tonight’s meeting of the newly formed Winning Goal Coalition’a group of DC residents and organizations who support building a new DC United stadium by using our civic resources in an open, fair, and responsible way. The meeting will take place a few blocks from the proposed stadium site, at Arena Stage, 1101 6th Street SW. It will be from 7:00 to 9:00 p.m. and speakers will include representatives of the DC Fiscal Policy Institute and the Southwest Neighborhood Assembly, and a concessions worker who is a member of the Unite Here Local 23 union.

Bring your questions, thoughts, and ideas!

The Winning Goal Coalition believes DC United and Major League Soccer are important for the region. A new stadium is helpful to the team, and it should be helpful to the District’s overall vision for economic development as well. At tonight’s meeting, the Coalition will share some ways the District can achieve this, including:

Join the Winning Goal Coalition to find out more about how to make the soccer stadium deal a winning one for DC residents!