The District ended 2011 with an average yearly unemployment rate of 10.3 percent, slightly higher than the rate for 2010 and far higher than that 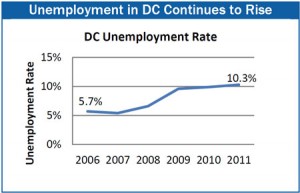 for 2007 before the start of the recession. This is a sign that economic weakness continues to affect DC residents.

Who are the District’s unemployed residents?  DCFPI’s latest look at data from the Census Bureau’s Current Population Survey shows that the increase in unemployment in DC has been widespread, but high school graduates and Black residents have experienced the highest increases in unemployment.

Highlights of our findings include: