The Good, the Bad, and the Ugly: How Did DC Schools Fare in the Mayor's FY 2013 Budget?
Skip to content
Back to the Blog >
Share :
Share this...

Given the hits that health and human services funding took in the Mayor’s Budget, some would say education advocates have less to complain about this year.  Even before the budget was released, Mayor Gray announced a two percent increase in the Uniform Per Student Funding Formula that is used to set overall funding for DC Public Schools and DC public charter schools.  But, is there more to the story?

The two percent increase allowed DCPS to increase the minimum per-student allotment to individual schools for the upcoming school year, from $8,400 to $8,568, which is primarily an adjustment for inflation. Yet while this increase appears to be a solid investment in DC schools, the reality is that some individual schools will have to do more with less money. Here are a few issues that DCFPI hopes will be explored further during tomorrow’s education budget hearings.

Finally, an examination of the winners and losers in the school funding allocations shows that this is driven largely by the size of the school and whether the school is growing or shrinking, not by the poverty or other needs of the student population.  Indicators of need, such as neighborhood high schools with large truancy rates or schools with a large share of students who are low-income, for the most part do not receive dedicated funding in DC’s distribution of local school funds.  The recently completed report of the Public Education Finance Reform Commission recommended that the funding formula be revised in future years to devote extra resources to schools with students who are both low-income and academically behind, and this year’s DCPS allocations reinforce the need for this change. 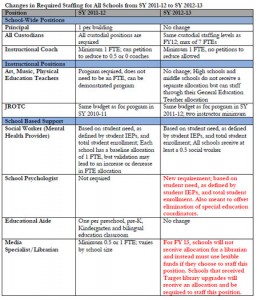 Before the Pandemic, DC’s Economy was Booming, but COVID-19 is Increasing Hardship

Pandemic is Throwing Many DC Residents into Financial Distress