The District’s economy is booming, but the gains aren’t leading to shared prosperity. Black residents bear the brunt of economic hardship in the District, with one in four living in poverty, according to new Census data. And incomes are growing fast for white and Latinx households but stagnating for Black households.

The District’s racial income and wealth divides have deep origins in centuries of racist policies. And those divides persist to this day due to ongoing barriers to economic opportunity — housing costs and displacement, job opportunities, and inequitable access to a high-quality education. Genuine economic progress, and the strongest future for the District, depends on an inclusive economy structured to meet everyone’s needs and giving everyone a fair chance to get ahead.

Here are five takeaways from Census’s new poverty and income data for the District:

1. A lost decade on reducing poverty. Poverty-level incomes are a harsh reality for one in six District residents, or 108,000 people, who found affording the basics such as rent, food, and utilities to be a daily challenge in 2018. The share of residents living in poverty — on about $25,000 per year or less for a family of four — was unchanged statistically from 2008, the year after the Great Recession began. While poverty is lower today than in the worst part of the recession, DC’s long and strong economic recovery should allow us to make more progress on poverty.  Black residents face the highest and most persistent poverty rates in the District, and they have been hurt most by this “lost decade” in poverty reduction.

2. The lost decade hurt Black residents the most. Roughly 78,000 Black residents — or 1 in 4 — lived in poverty in 2018. This is far greater than the roughly 13 percent of (or 10,000) Latinos and 6.4 percent of (or 16,000) non-Hispanic whites living in poverty (see Figure 1). In “Chocolate City” Black residents face the double burden of having the highest, most persistent poverty rates and living in high-poverty areas. These outcomes illustrate the economic harm that structural racism has caused Black families as well as the urgent need to remove economic barriers holding back people of all backgrounds who are doing their best to get by. 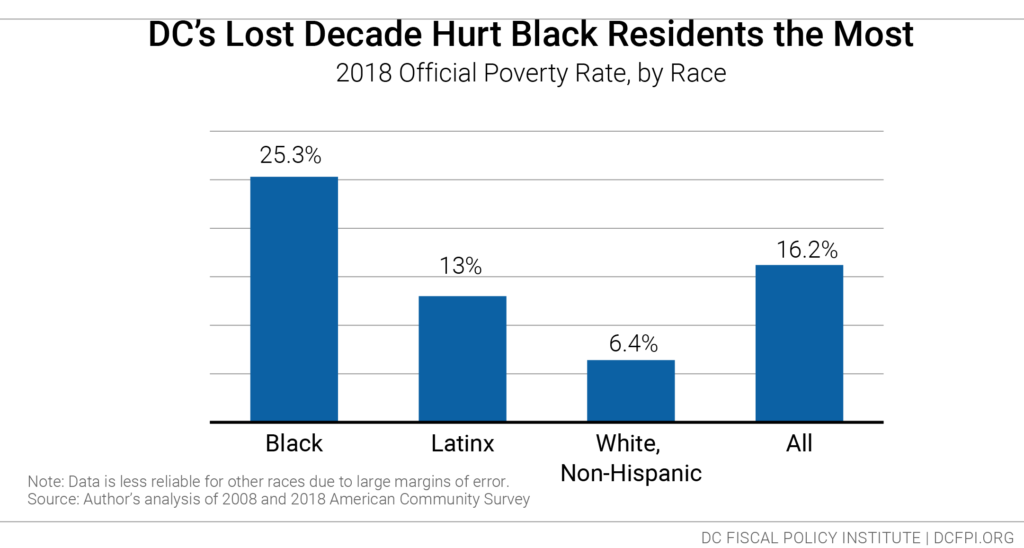 3. Children are the biggest losers in DC’s unequal economy. Some 23.1 percent of DC children lived in poverty in 2018, statistically unchanged from 2008 and well above the city’s overall poverty rate. There are devastating consequences for the more than 1 in 5 children growing up in poverty — most of whom are Black. Children experiencing poverty tend to be worse off in a range of ways, including being more likely to enter school behind their peers, scoring lower on achievement tests, working less and earning less as adults, and having worse health outcomes. This pattern is especially clear for the poorest and youngest children and those who remain in poverty for a long time during childhood.

Middle class living standards are improving overall as the city creates more jobs and wages rise, yet those gains are not reaching Black households. The persistent racial income disparities suggest that the District needs to do more to improve access to economic opportunity for Black residents in particular. 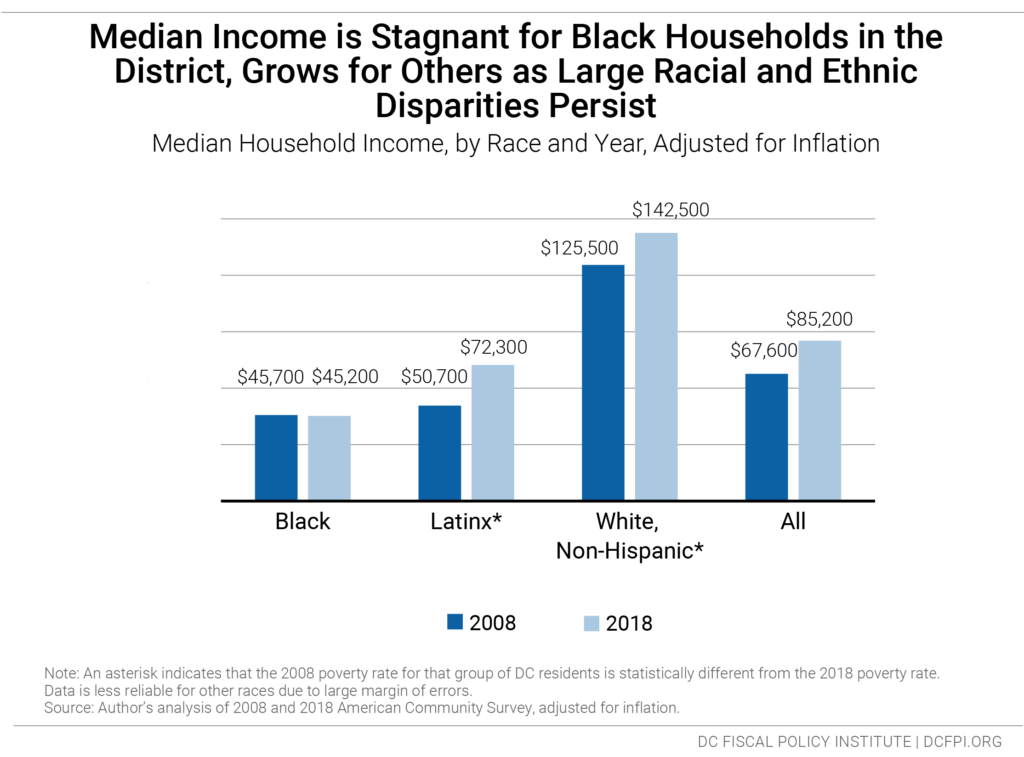 Economic exclusion keeps all of us from achieving a better future. Persistent poverty gaps and extreme income disparities erode equality of opportunity, harm family economic well-being, and threaten economic growth. It is critical for DC lawmakers to address disparate economic outcomes by bolstering workers’ rights and labor standards, targeting economic supports such as affordable housing and job training programs to populations experiencing the most economic distress, and strengthening public education.