Testimony of Claire Zippel At the Performance Oversight Hearing on the Department of Housing and Community Development
Skip to content
All Publications & Resources > Testimonies >
Share :
Share this...

Chairperson Bonds and members of the Committee, thank you for the opportunity to speak today. My name is Claire Zippel and I am the housing policy analyst and research coordinator at the DC Fiscal Policy Institute. DCFPI is a non-profit organization that promotes opportunity and widespread prosperity for all residents of the District of Columbia through independent research and thoughtful policy solutions.

In fiscal year (FY) 2017, the Department of Housing and Community Development (DHCD) made progress on a number of fronts, including reducing the Housing Production Trust Fund (HPTF) fund balance and improving its management of federal funds. Yet the longstanding issue of incompliance with the statutory requirement that 40 percent of HPTF resources support housing for extremely low-income residents remains unsolved.

In FY 2017, for the first time in recent history, the fund balance of the Housing Production Trust Fund (HPTF) declined—a sign that DHCD’s efforts to put new housing investments to work faster are making a difference. According to the city’s Comprehensive Annual Financial Report (CAFR), both HPTF spending (distribution of funds according to loan agreements) and obligations (signing of new loan agreements with affordable housing projects) continue to track upward (Figure 1). This progress was made possible by several of DHCD’s recent initiatives, including more frequent rounds of funding competitions, the creation of an online application portal, speedier underwriting timelines, and awarding funds to tenants purchasing their buildings through the Tenant Opportunity to Purchase Act on a rolling basis throughout the year.

As important as putting HPTF dollars to work quickly is ensuring that those resources are deployed in a way that addresses DC’s most urgent housing needs and is aligned with DC law. Three-fourths of DC households who face severe housing cost burden are extremely low-income, a group which includes one in five children in the District.[iii] By law, 40 percent of HPTF resources obligated each fiscal year must support housing affordable to extremely low-income residents (those below 30 percent of area median income, or AMI). Unfortunately, FY 2017 marks another year that HPTF obligations failed to meet this statutory requirement. Moreover, DHCD projects that the HPTF will also fall short in FY 2018 and FY 2019. This means that since FY 2014, only once has the District dedicated 40 percent of HPTF resources to extremely low-income households as required by law (Figure 2).[iv] 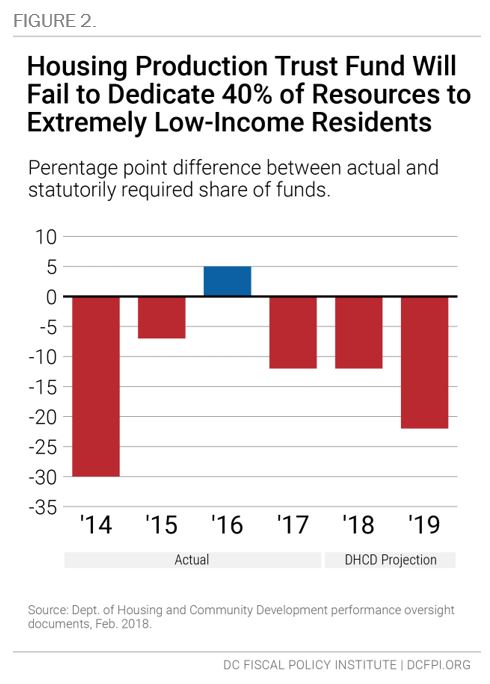 DHCD has identified several reasons why it has not met with this requirement in the past and has provided some indications that it hopes to improve compliance with the law going forward. Yet it is still unclear whether DHCD has a specific plan to improve its performance.

The agency indicates that its efforts to preserve existing affordable housing makes it difficult to also dedicate a large share of funding to extremely low-income households.[v] Affordable housing preservation is an important purpose, and it is true that many affordable buildings that apply for HPTF funds are above the 30 percent AMI level. (DHCD indicates that the new public-private preservation fund will become the funding mechanism of choice for some of such projects, which should free up some HPTF funds for other uses.)

However, this points to the need for DHCD to proactively identify deeply affordable housing for preservation, in order to both save the homes of the city’s lowest-income residents and facilitate compliance with the HPTF law. Surely there are existing properties in the District that are occupied by extremely low-income households and require rehabilitation and preservation, such as those with Section 8 subsidies. We recommend that DHCD’s preservation unit and new preservation officer keep the HPTF statute in mind as they develop the agency’s proactive preservation strategy.

While diverting some preservation projects from the HPTF to the new preservation fund may improve compliance with the HPTF statute, funding selection criteria that more strongly prioritize extremely low-income housing are likely necessary as well. “Legacy” projects (those selected by prior administrations) are one reason why greater compliance with the law was not evident in FY 2017 despite recent funding rounds’ emphasis on lower income targeting. Yet DHCD projects that the HPTF will also fail to meet statutory requirements in FY 2018 and FY 2019, [vi] when nearly all obligations will be to projects selected under the current criteria. This suggests that future funding rounds must more stringently prioritize extremely low-income housing.

Finally, we recognize that one key driver of the lack of HPTF targeting compliance is not strictly under DHCD’s control. In recent years, the city has not provided enough new operating subsidies for affordable buildings through the Local Rent Supplement Program (LRSP). Ongoing LRSP assistance is typically required for HPTF-assisted housing to be made affordable to extremely low-income residents. While LRSP is budgeted within the DC Housing Authority subsidy, the link between the availability of LRSP and DHCD’s ability to meet its statutory obligations suggests that DHCD should have a more proactive role in identifying an adequate level of LRSP funding and requesting that funding from the Mayor and Council.

A series of recent reports by the Office of the DC Auditor found several lapses in DHCD’s oversight of 14 affordable housing projects that received loans from the Housing Production Trust Fund, as well as shortcomings in DHCD’s financial reporting on the HPTF.[vii] Inadequate staffing was a key reason projects slipped through the cracks, according to the audit. In the FY 2018 budget, the Mayor and Council provided funding to beef up staffing in DHCD’s asset management division. As of this month, candidates for all the new positions have been selected, including two deputy division directors who will be responsible for putting in place more stringent standard operating procedures to enhance project oversight and compliance going forward.[viii] These hires are a promising first step. We encourage DHCD to move quickly to implement all of the DC Auditor’s recommendations.

Management of Federal Funds Is Improving

DHCD has undertaken a significant effort to improve the management of grants it receives from the federal Department of Housing and Urban Development (HUD), including the HOME and Community Development Block Grant (CDBG). Each year, HUD audits its grantees. In FY 2014, there were 17 findings on DC’s audit; in FY 2016, there were two findings.[ix] This reflects the fact that DHCD has strengthened its underwriting process and aligned its personnel services budget with each grant’s administrative spending cap. The latter was a substantial undertaking which required a detailed review of the agency’s entire personnel services budget and the reallocation of staff time among various funding sources.

Additionally, DHCD has made some progress to improve the agency’s troubled track record of spending down the federal grants it receives. DHCD successfully completed a remedial CDBG spending plan for HUD, and as a result, the agency met its CDBG spending test (a HUD assessment of whether a grantee is obligating its funds in a timely manner) in FY 2017 for the first time in several years.[x] However, there is additional work to be done to maximize the use of federal funds, particularly the HOME grant. DHCD should continue its efforts to put federal dollars to work more quickly.

Thank you again for the opportunity to testify today. I would be happy to answer any questions.