Testimony of Brittany Alston At the Public Hearing on Bill 22-0572, The Wage Garnishment Fairness Amendment Act of 2017
Skip to content
All Publications & Resources > Testimonies >
Share :
Share this...

Chairman Allen and members and staff of the Judiciary Committee, thank you for the opportunity to submit written testimony. My name is Brittany Alston and I am the workforce development policy analyst with the DC Fiscal Policy Institute, a division of the Center on Budget and Policy Priorities. DCFPI promotes budget and policy choices to expand economic opportunity for DC residents and to reduce income inequality in the District of Columbia, through independent research and policy recommendations.

I would like to express my strong support for Bill 22-0572, the Wage Garnishment Fairness Amendment Act of 2017.

Garnishment is a procedure used by creditors to intercept a person’s wages to collect on a debt. DC law limits how much can be garnished from a person’s pay. Under current law, a creditor may garnish 25 percent of a worker’s disposable income, or the amount by which a worker’s weekly disposable income exceeds 30 times the federal minimum wage. This law is outdated—unchanged since 1971—and fails to adequately protect low- and moderate-income workers. Practical, common-sense updates to the law are necessary to allow DC workers to keep more of the money they earn, rather than keeping them stuck in a cycle of poverty.

In 2014, the ADP Research Institute (ADP) released a report entitled, Wage Garnishment, The Untold Story.[1] The ADP study revealed that in 2013, 7.2 percent of employees had their wages garnished.[i] Of those having garnishments, 3.4 percent were for child support, followed by 2.9 percent for other forms of garnishment–of which a major part was student loan and court-ordered consumer debt garnishment–1.5 percent for tax levies and 0.4 percent for bankruptcy.

The National Consumer Law Center, the leading policy analysis and advocacy organization on consumer law matters, gives DC an “F” for its garnishment protection law because it fails to protect more of workers’ wages than the federal minimum wage, or less than half the poverty level for a family of four. [4] The following bullet points describe how states were graded:

By changing the multiplier in the garnishment calculation from 30 to 40 times 150 percent of the DC minimum wage, the bill would allow people who work full time at the District minimum wage to keep all their earnings.

It will help close the wealth gap and allow workers to earn a living wage: Amending the law to allow low and moderate-income workers to keep more of the money they earn will help to close the wealth gap, enable DC workers to afford basic necessities in a city with one of the highest costs of living in the country, and help combat the collateral consequences of excessive garnishment. Without better protections, garnishment will continue to harm low and moderate-income workers the most by making it difficult or impossible to pay for housing, utilities, food, medical expenses, and other basic needs.

The following graph compares the percent of income garnished currently as compared to the proposed bill. 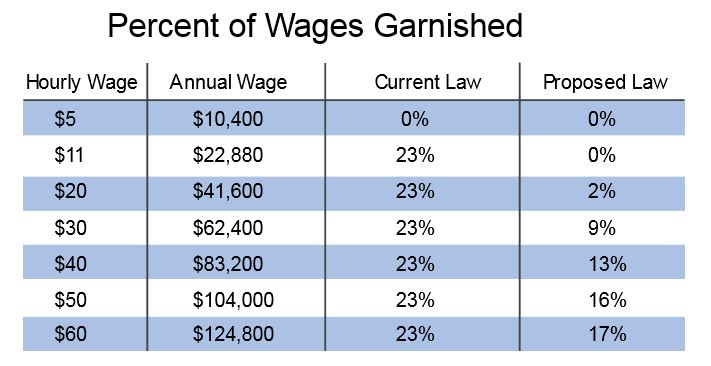 It will further the District’s progressive policies supporting lower income wage earners: The D.C. Council’s recent passage of legislation raising the minimum wage—and the corresponding dialogue about the income gap problem, the high cost of living, and the importance of the ability to earn a living wage—creates a timely and important opportunity for garnishment reform. This amendment is a natural next step for the District and is necessary to prevent garnishment from undermining the core policies behind the city’s recent decision to raise the minimum wage.

In short, the Wage Garnishment Fairness Amendment Act of 2017 is another tool the District can use to protect low and middle wage workers. Thank you for the opportunity to submit written testimony and am happy to continue this conversation.

[i] In this study, the ADP Research Institute used aggregated, anonymous payroll data from 2013, 2012, and 2011. Though all the detailed analyses were based on data from 2013, 2011 and 2012 data were used to check the trend in garnishment. The dataset was comprised on approximately 13 million employees, ages 16  and older.

[ii] The 27,000 figure does not include families and individuals who are currently homeless, or those who are “doubled-up,” sharing housing with another household because they cannot afford rent on their own.

Testimony of Kate Coventry, Senior Policy Analyst at the Budget Oversight Hearing of the Committee of the Whole

Testimony of Doni Crawford, Senior Policy Analyst at the Budget Oversight Hearing on the DC Housing Authority, Committee on Housing and Executive Administration