Chairperson Silverman and members of the Committee, thank you for the opportunity to testify today. My name is Ilana Boivie and I am the senior policy analyst at the DC Fiscal Policy Institute. DCFPI promotes budget and policy choices to expand economic opportunity for DC residents and to reduce income inequality in the District of Columbia, through independent research and policy recommendations.

I would like to focus my testimony today in four areas—the need to: 1) research and develop a plan for a comprehensive workforce development system, 2) fully fund the start-up costs for paid family and medical leave, 3) provide transportation assistance for adult learners, and 4) move to a strategic enforcement model for DC’s labor laws.

In recent years, the District has made strides to increase employment training opportunities for residents. While this is laudable, these efforts do not seem to be have been made in a coordinated, strategic manner. They do not appear to be part of a larger effort to build a comprehensive workforce system that uses DC’s resources to address the highest priority needs. 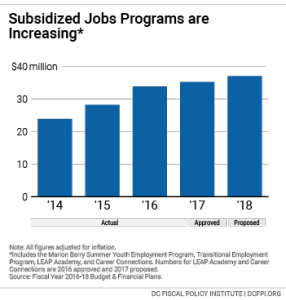 While subsidized jobs programs could be very beneficial to certain cohorts of jobseekers, it is unclear how these new programs fit into DC’s workforce development system overall.

In addition, the proposed FY 2018 budget allocates $16.75 million in capital money to create a new “Washington DC Infrastructure Academy,” located at the St. Elizabeth’s East Campus, which will provide job training in the infrastructure industry.

Again, this is a worthwhile goal, but there already are a number of apprenticeship programs in this sector, including several led by labor unions, so this effort could be duplicative. The construction trade unions, for example, spend over $20 million each year on apprentice programs in DC, and have proven track records of graduating apprentices to journeyman. In addition, there are other community based organizations that provide training for utilities jobs, and the WIC has discussed expanding its workforce intermediary program to include the utilities sector.

Rather than continuing to invest in “one-off” programs each year, DOES and the WIC should conduct a thorough assessment of the overall workforce development system, in order to assess whether the system is best meeting the needs of both jobseekers an employers, and then tailor new efforts to fill any gaps. Such an analysis should include: 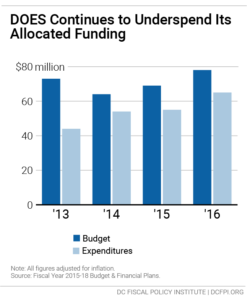 DOES has recently made efforts to spend down more of its federal money on youth programs.[1] However, across workforce programs at DOES, a total of $14.4 million in federal money from prior fiscal years has been left unspent, including $6.9 million for youth, $4.8 million for dislocated workers, and over $2 million in employment services.[2]

Several programs that receive federal money also use local dollars.[3] The District should make every attempt to exhaust all available federal money first before it spends local money on the same or a similar program. To the extent that federal money cannot be spent on a particular program or for a particular cohort—for example, if the program is not compliant with federal rules under the Workforce Innovation and Opportunity Act—then it may be appropriate to spend local money first. However, DOES should make clear the specific reasons for using local money rather than federal dollars. Again, a comprehensive analysis of DC’s available jobs, training programs, and resident needs can shed light in this area.

In December 2016, the DC Council passed the Universal Paid Leave Act (UPLA), which will provide 8 weeks of paid leave for new parents to be with their children, 6 weeks to workers who need to care for an ill relative, and 2 weeks for workers to address their own health needs, beginning in 2020.

The fiscal year 2017 budget allocated $20 million toward the start-up costs for UPLA, to be used in 2018 and beyond. However, the OCFO estimates the start-up administrative costs to be $40 million over 36 months. The proposed FY 2018 budget maintains the initial $20 million set aside last year, and allocates it to DOES. However, the budget fails to fund the additional $20 million needed to help the new office secure an IT program, office supplies, and other start-up costs.

The lack of funding is damaging, because it can likely delay when DC can start offering paid leave to new parents and workers needing time to care for an ill relative. UPLA stands to help not just some 540,000 DC workers,[4] but also small businesses that currently cannot afford to provide paid family leave. An extensive analysis of this program found that it would provide additional benefits to DC residents and the economy, including increasing breastfeeding rates, reducing infant mortality, and increasing the number of women who participate in the labor market.[5]

DCFPI is pleased to hear that DOES officials have noted that they have a game plan to move forward with implementation of the law.[6] However, they cannot do so until the law is fully funded. We urges the Council to ensure that the full $40 million is allocated in this year’s budget so that this important program can get off the ground as quickly as possible.

The proposed FY 2018 budget includes no funds to provide transportation assistance to adults in education and training programs, even though the cost of transportation has been identified as a major barrier to participation.[7] Without transportation assistance, many adults miss classes and are unable to complete their programs. This means that many DC residents are being held back, and that the District is not getting as much as it could out of its substantial investments in adult education and job training.

A fall 2016 report from the Deputy Mayor for Education (DME) recommends that Kids Ride Free be expanded to all DC residents enrolled in a publicly-funded education program, at an estimated cost of $1.5 to $2 million.[8]

The District currently invests over $80 million in local and federal dollars to support educational instruction for adult learners. The relatively modest cost of expanding Kids Ride Free to adult learners—which surveys suggest could lead to 30 percent more successful outcomes for participants in these programs—seems well worth the additional investment. The DME report notes that “the current investment in adult education could yield greater results with a reduction in transportation costs for adult learners.”

I want to thank Chairperson Silverman, who (along with six of her colleagues) introduced legislation—the Adult Learners Transit Subsidy Amendment Act of 2017—which would provide free public transportation for adults in education programs, based on the recommendations of the DME report. DCFPI hopes that the Council fully funds this bill and incorporates it into the FY 2018 budget, so that this important assistance can be provided to learners as soon as possible.

DOES Should Move to Strategic Enforcement of Labor Laws

The District has enacted a number of laws in recent years to improve wages and benefits of people who work in the District, including increases to the minimum wage, paid sick and safe leave, new penalties for “wage theft” when employers fail to pay workers fully, and protecting workers from discrimination. DCFPI is pleased to see that two additional labor laws that were passed last year subject to appropriation—the Building Service Employees Minimum Work Week Act of 2016 and the Fair Credit History Screening Act of 2016—have been funded in the proposed budget.

All of these new laws have the potential to be incredibly beneficial to working residents, but they are only as good as they are robustly enforced.

Those who are most vulnerable to wage theft and workplace accidents are not only less likely to know their rights, but also to come forward even when they do. Indeed, there seems to be a very low volume of complaints on all labor laws in the District. For example, in FY 2016, there were just 167 complaints on the Minimum Wage Act, 40 on the Living Wage Act, and just 22 on the Sick and Safe Leave Act.[9] For this reason, a complaints-based enforcement model is not likely to be effective; research shows that “strategic enforcement” of labor laws can be far more effective.

Recent efforts by the Office of Labor Law and Enforcement (OLLE) show some important steps in this direction. For example:

However, even more can be done. Additional “strategic enforcement” strategies can include:[10]

It should be noted that OLLE has hired several additional labor law investigators in recent years, from 7.2 total employees at the Office of Wage Hour in FY 2014 to 18 in FY 2017. This has helped the department investigate more complaints and collect more liquidated damages and penalties.[12] However, the office currently has four vacancies for Wage and Hour Compliance Specialists.[13] These positions should be filled as quickly as possible.

It should also be noted that moving out of a complaints-based model and to a strategic enforcement model does not have to be more expensive. Triaging complaints—based on severity, number of workers impacted, and/or whether the complainant is still employed at the firm, for example—can save money, which can then be spent more effectively on strategic enforcement.[14]

Finally, I would like to note that one labor law that was passed last year subject to appropriation has not been funded in the proposed budget. The Procurement Integrity, Transparency, and Accountability Amendment Act of 2016 would require that city contracts above $75 million must have a Project Labor Agreement (PLA). The Fiscal Impact Statement finds that the bill could increase contract costs, because PLAs “require non-union contractors to follow union practices.”[15] The District should be proud that it has taken many steps to be a “high-road” employer, both in its compensation packages and job protections for city workers and in its commitment to living wages for city contractors. This bill is one more step in that direction, and should be fully funded.

Thank you for the opportunity to speak today; I am happy to answer any questions.

[1] March 30, 2016. “Grosso exchange of letters with DOES about WIC’s oversight of youth programs.” http://www.davidgrosso.org/grosso-analysis/2016/3/30/grosso-exchange-of-letters-with-does-about-wics-oversight-of-youth-programs

[7] According to learner listening sessions conducted in 2015 by the DC Adult and Family Literacy Coalition (AFLC) and Fair Budget Coalition. In addition, over a third of 1,000 adult learners surveyed in 2016 by the DC AFLC reported their biggest transportation concern is its cost.

[8] Deputy Mayor for Education. 2016. “The Need for Transportation Subsidies and Assistance for Adult Learners.” http://lims.dccouncil.us/Download/36809/RC21-0140-Introduction.pdf

[10] Janice Fine. 2013. “Solving the Problem from Hell: Tripartism as a Strategy for Addressing Labour Standards Non-Compliance in the United States.” Osgoode Hall Law Journal, Vol. 50, No. 4.

[15] The bill’s Fiscal Impact Statement states it will cost $113,000 in fiscal year 2017, and that it can increase construction contract costs by $26.2 million annually; this can be paid with capital budget. http://lims.dccouncil.us/Download/34425/B21-0334-Fiscal-Impact-Statement2.pdf