DC’s estate tax, our most progressive revenue source, has been substantially eroded over the past several years, as DC has repeatedly increased the size of estates that are allowed to be passed to heirs completely tax free. But DC policymakers didn’t anticipate that Congress would make this problem much worse. DC Council should act now to decouple our estate tax from the federal tax rules.

Over the past several years, DC has phased in a number of tax cuts through the so-called “tax-cut triggers,” including an increase in the portion of large estates that can be passed on to heirs tax free. This “exemption” amount went up from $1 million to $2 million in tax year 2017. Beginning this January, the exemption was set to automatically match the federal exemption, which was increased dramatically by the George W. Bush era tax cuts and subsequent legislation, from $675,000 in 2001 to $5.5 million last year.

When DC Councilmembers allowed this final estate tax cut to go into effect in last year’s budget process, they did not anticipate that a federal tax bill would double the estate tax exemption to more than $11 million.[1]

These estate tax cuts have had real consequences for DC revenue collections. According to the Mayor’s budget documents, DC’s local estate tax revenues declined by 44 percent this fiscal year (FY 2018) due to the prior year’s exemption increases, and are expected to fall a further 46 percent in FY 2019 due to the combination of the final planned exemption increase and the federal tax cuts. 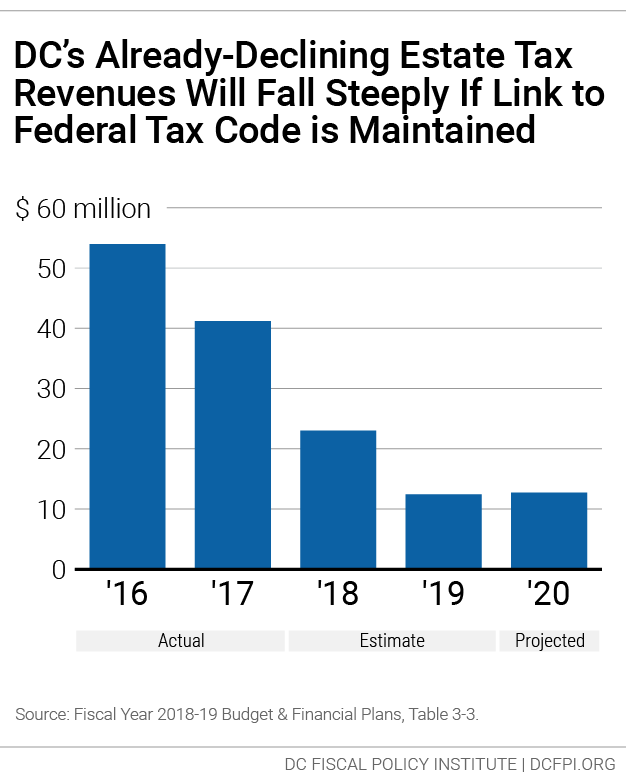 All told, DC estate tax revenue is expected to fall to $12.5 million in FY 2019, compared to actual collections of $41 million in FY 2017—a loss of nearly $29 million in just two years[2]. These revenue losses increase inequality, and make it harder for the District to end homelessness, address our affordable housing challenges, provide a quality education to every student, and ensure equitable access to health care.

DC local government should strive to do better than the current federal government, not double-down locally on federal tax cuts for the wealthy.

[1] The Tax Cut and Jobs Act of 2017 raised the estate tax threshold to $10 million for 2017 for singles and $20 million for married couples. The threshold is adjusted for inflation each year. For 2018, the commonly used expected thresholds are $11.2 million and $22.4 million, respectively; the IRS has not announced its official thresholds for 2018 as of today’s date.

[2] Local estate tax revenues are difficult to predict perfectly and can fluctuate from year to year, but the trend observed here is driven by legislative changes.