Yet right now, the DC Council is considering legislation that would do just the opposite: cut property taxes on the very same high-value homes.

A tax cut for all homeowners also would widen the gap between DC’s wealthiest and poorest households. Nearly half of the proposed tax cut would go to households with incomes above $150,000, and less than one-quarter would go to those with incomes below $50,000. 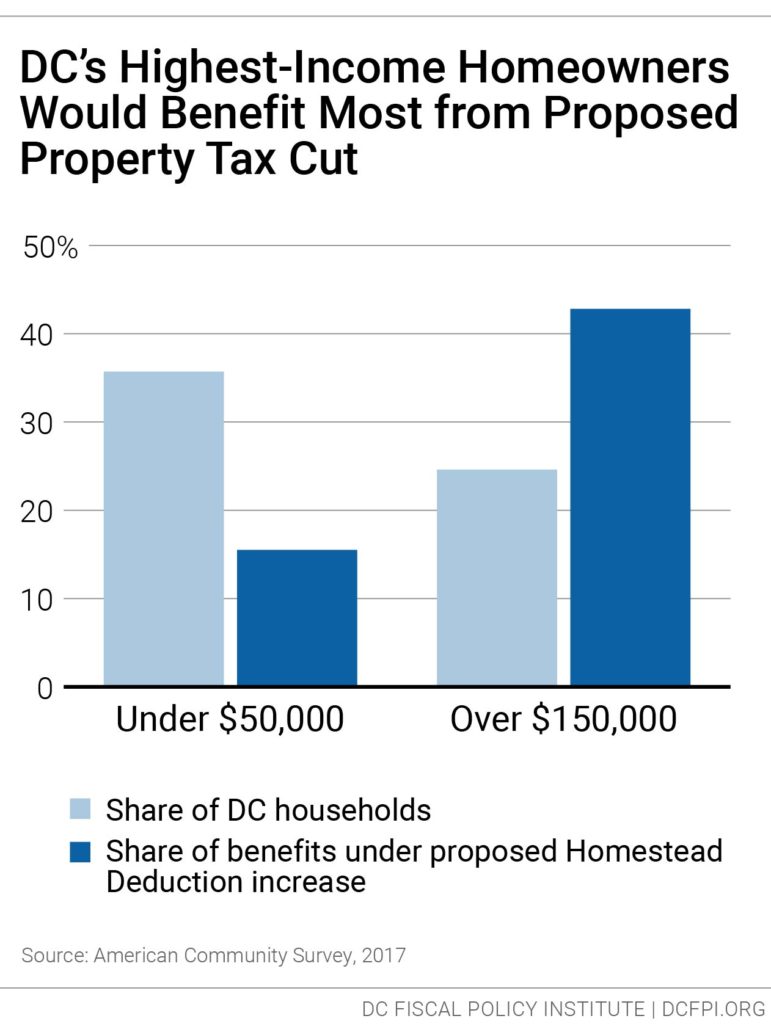 The proposed tax cut would cost the District $38 million annually, leaving us with fewer resources to address DC’s challenges and invest in a strong future. $38 million would be enough, for example, to put DC on a path to ending chronic homelessness over the next four years. The tax cut also would make it hard to fund important legislation adopted by the DC Council last year, including providing comprehensive support for children from birth to age 3, fighting climate change through clean energy, and replacing punitive and discriminatory school discipline practices with more mental health services and positive behavioral supports.

Instead of cutting taxes for DC’s wealthiest homeowners, the District’s leaders should look for ways to help homeowners who are struggling the most with their property taxes. This could include expanding DC’s Schedule H tax credit, which provides up to $1,000 back when homeowners with low or moderate incomes are burdened by property taxes. A targeted approach would make it easier to help those who really need it, while also leaving more resources to help renters who don’t have access to homeownership and struggle to afford living in DC.

Any additional property tax assistance for these households should be paired with a focus on extreme wealth, which would make our tax system more fair. A property tax surcharge of 1 percent on homes worth at least $2 million and 2 percent on homes worth at least $5 million would raise $74 million yet only affect 1.4 percent of homes. By asking DC’s wealthiest households to pay their fair share, we can reduce taxes for others and still have revenue to invest in things that strengthen our communities, like schools and affordable housing.