It’s Tuesday, which means the return of our weekly focus on important research generated by the DC Tax Revision Commission. Today we focus on one of the key goals of the commission, as laid out in the legislation that established it: to make recommendations to improve the “fairness in the apportionment of taxes.”

Those are pretty fancy words for a pretty simple idea — that tax rates paid by DC residents should be based on their ability to pay.  Unfortunately, as the commission learned this year, the current DC tax system is imbalanced.  Low- and moderate-income families pay the most in taxes as a share of their income, far more than our highest-income residents.  Fortunately, though, there are several ways to level the playing field that the commission can consider.   We list our three favorite ideas below. 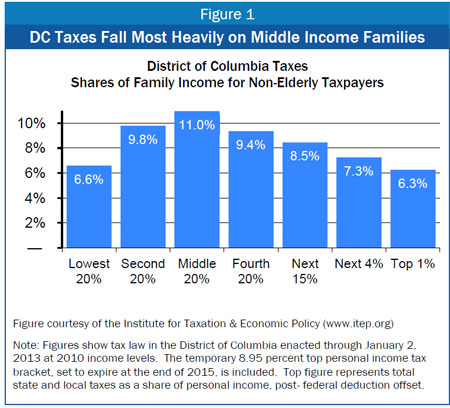 How can DC make this a fairer system?  Here are three for starters:Families in DC’s middle, with incomes around $50,000, pay 11 percent of their income in DC income, sales and property taxes.  That’s $5,500 in DC taxes for a family earning $50,000.  Meanwhile, the highest-income one percent pay just over 6 percent of income in DC taxes.

DCFPI looks forward to the tax commission’s consideration of these recommendations and others to achieve the goal of fairness.