The new Marriott Marquis isn’t employing DC residents at anticipated levels because hiring practices and the job training program at the hotel were flawed, a new report found. Reforms to both the DC law aimed at increasing employment for residents and job training programs would go a long way toward ensuring that DC residents receive quality employment opportunities at new businesses that receive economic development subsidies from the city. 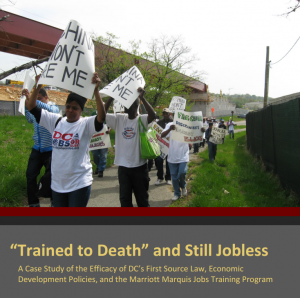 The long-awaited Marriott Marquis Hotel opening at the Washington Convention Center last year was to be a “win-win” for DC residents and the business community. Developers received over $206 million in subsidies to open the hotel, and in exchange’and in compliance with DC’s “First Source” law’committed to hiring DC residents for at least 51 percent of their available jobs. To supplement those efforts, Goodwill Industries of Greater Washington received $2 million to lead a jobs training program aimed at giving unemployed DC residents the skills they needed to be hired by the hotel.

Unfortunately, these efforts failed to live up to expectations at nearly every level, according to a new report from One DC, a community group dedicated to racial and economic equality. The report, “”˜Trained to Death’ and Still Jobless,” finds that:

This is not the first time the First Source law has been called into question. A 2011 DC Fiscal Policy Institute report found that the law was largely ineffective in ensuring that DC residents gain quality employment from development projects. The report called for increased compliance and oversight of the law; ensuring that eligible projects receiving subsidies have signed First Source employment agreements; and making certain that District residents seeking jobs are listed on the city’s First Source job registry.

A recently enacted federal law, the Workforce Innovation and Opportunity Act (WIOA), should compel many improvements in job training programs. WIOA encourages a specific focus on those with the highest barriers to employment as well as new performance measurement systems to better track the effectiveness of job training and education programs. A WIOA plan is due next March. The city should develop a solid, workable plan based on practices that have proven most successful.

WIOA changes and First Source reforms would help workers in the District achieve the skills they need to gain quality employment’especially from development projects subsidized by the city.