The gap between the rich and poor in DC has widened in the past few decades according to a new report from the Center on Budget and Policy Priorities. The report, “Pulling Apart,” is a state-by-state analysis of growing income inequality over the last several decades. Its findings are particularly disturbing because the report takes into consideration supports like federal housing subsidies and TANF which ease strain on the lowest earning DC residents.

Most notably, the Center’s report finds that this growing inequality was caused largely by both declining incomes and the bottom and rising incomes at the top both the short term (since the late 1990’s/mid 2000s) and the long term (since the 1970s). Since the late 1990s/early 2000s, incomes for the poorest fifth of DC households have declined by more than 18 percent. Over the same period, households in the richest fifth have seen increases of over 16 percent.  The report also found that while incomes were declining since the seventies, incomes at the top have actually doubled, heightening the inequality between the groups. 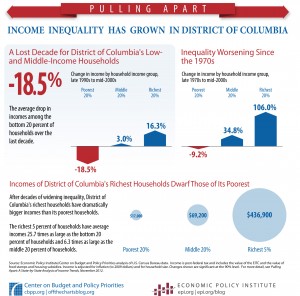 This data echoes findings in a DCFPI report released earlier this year, which showed DC ranks third among the nation’s largest cities in the gap between richest and poorest residents. In 2010, for example, the income of the top fifth of households in our city was 29 times the income of the bottom fifth.

What can we do about this? The District can put in place policies and programs that create opportunities for our lowest-income residents. Education and job training are two key factors that help low-income workers move up the career and income ladder. By funding policy changes that help workers prepare for living wage jobs, find affordable housing, and receive better pay, the District can help close the gap. Here are several ways to do that:

One in 11 DC residents wants to work but cannot find a job. DC has an opportunity to invest in these individuals to help them gain skills that will allow them to compete in DC’s job market and pull themselves out of poverty through the job assessment and training component of TANF, Temporary Assistance for Needy Families. One out of three DC families receives TANF assistance. DC has revamped its assessment process and heads of households are now getting the help they need to enter and reenter the workplace. In addition to continuing to focus on the training components of TANF, DC has to take into consideration that some families may need longer periods to reach the point of self-sufficiency. By including certain exemptions, DC can insure that these families have enough time to find work.

Implementing a workforce intermediary is yet another option that DC has for matching residents with viable employment. Mayor Gray appointed a task force to create an intermediary that gave its recommendations earlier this year. The District’s Workforce Investment Council is currently hiring a director. An intermediary would be an innovative approach to matching qualified employees to appropriate positions around the District.

The District’s living wage law requires DC government contractors and recipients of government assistance (in grants, loans, or tax increment financing in the amount of $100,000 or more) to pay its affiliate employees at least $12.50 an hour. By strictly enforcing and expanding the already existing living wage law, many low wage workers will fare better in the current system. For low earners not covered by this law, the District should consider raising the minimum wage. Raising wages of low-income workers is one of the most effective ways to lift households out of poverty.

Expanding affordable housing will also help to pull the lowest income families up the ladder. Initiatives like the Local Rent Supplement Program (LRSP), which provides monthly rental subsidies to help families afford their homes, increase income for those at the bottom of the income scale. Expanding this program will allow more families in the District to escape poverty through rental subsidies.