“I live in DC and I can barely afford it. Gas is high. I work in another state. Help DC residents stay in DC and work in DC with reasonable wages.” That is what 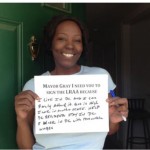 one resident of Ward’s 7 Hillcrest neighborhood said when asked what she thought about legislation that would require large retail stores to pay their workers a living wage. Her views are shared by over 1,000 of her neighbors.

The debate over the Large Retailer Accountability Act has focused on whether the law would be good for residents and communities. Opponents of the bill say that it will reduce access to low-cost goods in DC neighborhoods that need them. Indeed, one of the affected businesses, Wal-Mart, has indicated that it will not build three of six planned stores if the bill becomes law.

Yet even knowing this, many District residents support the Large Retailer Accountability Act, which would require businesses with parent company gross receipts in excess of $1 billion and retail stores in the District greater than 75,000 feet to pay employees at least $12.50 an hour in wages and benefits. A majority of DC Council members agree with this approach; the bi

Supporters of the bill visited DC residents in Ward 7 in recent weeks, and more than 1,100 residents signed petition sheets asking Mayor Gray to sign the bill. Canvassing has focused on the east-of-the-river ward because Wal-Mart has indicated it will pull out of agreements to build stores in Ward 7 if Mayor Gray signs the living wage bill into law. At their 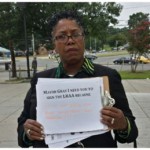 doorsteps, sometimes only steps from the sites for these stores, Ward 7 residents say that their highest priority is good-paying jobs. They want more retail in their neighborhoods, but they can only afford to shop and pay for goods on top of rent, transportation, and utilities with a living wage.

That is the message of the Ward 7 resident pictured below:  “It is not asking too much coming from these corporations!” As has been shown in a Demos study focused on large retailers, these companies have a great impact on local markets. Research also suggests that an increase in wages will only modestly impact consumer prices. 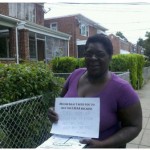 Mayor Gray has said he is listening to all sides. Many of his Ward 7 neighbors, such as Ms. Childs on Blaine Street NE, want the mayor to sign the living wage bill into law.  If Mayor Gray has been talking to residents of these communities, undoubtedly he has been hearing that, too.