Wage inequality in the District of Columbia is at its highest point in three decades, in part due to rapidly falling economic prospects for those without a college degree, according to a new DCFPI report released today. Residents with higher education have seen an increase in earnings and low unemployment while those without college degrees face declining wages and high unemployment even amid general prosperity in the city. The report also finds that the number of African-American DC residents with a job has dipped below 50 percent each year since 2009. And DC’s youngest workers have the highest unemployment rate of any age group.

Because residents without college degrees have limited access to jobs in DC’s high-education driven job market, investments and an increased focus on adult literacy, 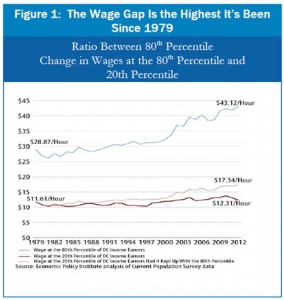 sector-specific training, and youth work programs are needed. These changes would better prepare residents for the jobs the District has to offer, allowing them to also share in the city’s growing prosperity.

Some major findings of the report include:

The District is a healthier city when all residents benefit from its prosperity. Mayor Gray and the DC Council have the chance with the fiscal year 2015 budget to make investments that can help ensure all residents can benefit from DC’s economic growth, by increasing funds for adult learning, youth employment, and focused, sector-specific job training. But money isn’t the only need. The District also needs to focus on accountability and better coordination of these programs to best serve residents.