A new bill before the City Council would “untie” the city’s hands so that policymakers can spend a portion of the recently announced surplus for 2016 on much-needed services, rather than putting the entire amount into savings. The legislation would allow the District to spend about $90 million now, and give policymakers flexibility to spend the full amount of any future budget surpluses. 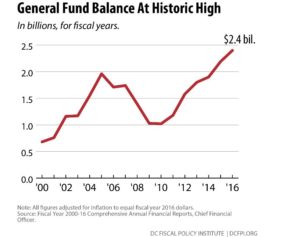 Under a policy the District adopted in 2010, year-end surpluses must go into savings until the city has enough cash in reserve to fund DC government for 60 days. This takes away the choices that policymakers should have—to spend a surplus, save it, or to do a combination. The just-released audit of the District’s finances showed that DC’s General Fund balance grew by $222 million in 2016—to a record $2.4 billion—but none of that is available to be spent because of this rule. (The fund balance represents DC’s accumulated assets, including various reserve funds.)

The new Council legislation, The Reserve Fund Improvement Amendment Act of 2017, would still require the District to have enough cash to cover expenses for 60 days, but would not take out the expense of paying off DC’s bonds, since the District already sets aside money for that purpose. Under this formula, DC’s existing cash balance is $90 million more than needed to meet the reserve requirements. This would mean that some $90 million would be freed up instantly for the city to spend on services.

The additional money would be allocated to two specific programs under the bill—half of the money would go to fund the Housing Production Trust Fund, which finances new affordable housing projects, and the other half would be reserved for school modernization projects.

This proposal makes sense because it increases the flexibility DC’s leaders have when the District has a budget surplus. The bill could be strengthened even further by broadening the allowable uses to include other important one-time costs, such as start-up costs for paid family and medical leave.[1]

In fact, the proposal is very much in line with one of the recommendations made by DCFPI at the Progress Amidst Uncertainty: Making the Most of DC’s 2018 Budget event. DCFPI outlined three policy proposals in response to the growing city surplus: delay the tax-cut triggers, spend the surplus, and set up a reserve fund.

[1] Because a year-end surplus is not guaranteed every year, the District cannot use the surplus to fund programs or services that have ongoing costs, like hiring more teachers or providing permanent supportive housing to residents experiencing chronic homelessness.