Meeting a family’s basic needs is harder in the District than in almost any other U.S. city. That is the conclusion of a new report from the Economic Policy Institute which takes a fresh look at the high costs of raising a family across the nation. The report finds that DC is the most expensive city in the United States to raise a single child in 2013. And only three other cities rank as more expensive places for two-child families.

These startling numbers are based on EPI’s “basic family budget,” a realistic estimate of the income that a family needs to be 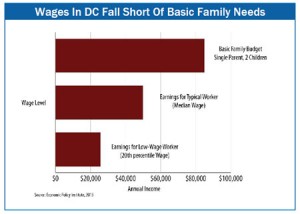 economically secure, after paying their normal annual expenses. The budget reflects a family’s housing, food, childcare, transportation, healthcare, taxes, and other necessary expenses, taking into account differences in these costs from city to city. For example, a couple with two children requires $88,615 in annual income to afford the basic necessities in DC. That same family would need $60,689 in Cincinnati or $73,473 in San Diego. When compared to the largest city in each state, DC’s basic family budget is second only to New York City.

There is a sharp difference between the income of many DC families and the costs of a no-frills family budget. In a family of four, both parents would need to earn an hourly wage of $21.30 to afford basic household expenses. But a DC resident working at minimum wage only earns $8.25 an hour — about 40% of the necessary basic family budget even with two earners. For families with one wage earner, the challenges are even greater. The typical worker in DC earns enough to cover just 60 percent of the basic family budget relying on one earner.

Low-wage workers in DC face a huge gap between what they earn and what they need. For single-parent, low-wage workers — those in the bottom 20 percent of wages — earnings from year-round full-time work would cover less than one-third of the basic budget income.

Why does it take a higher income to reach economic security in the District of Columbia than almost any other city? One answer is that the high costs of childcare, housing, and healthcare drive the cost of living. And while the DC Council dedicated special attention to these issues in its 2014 budget, the fact that DC ranks in the top twenty-five most expensive cities for all three categories demonstrates the necessity of continued funding for programs to help families afford the cities where they work.

These findings confirm what residents already know: DC is becoming less affordable every year. At current income levels, meeting basic costs is a challenge for even middle-income families. Whether through raising the minimum wage or improving the efficacy of jobs-training programs, it is time to renew our commitment to strengthening the economic security of DC’s working families.