Thanks to legislation championed by a coalition of low wage workers, advocates and allies that was passed by the DC Council at the end of last year, DC’s minimum wage went up from $8.25 to $9.50 today. While this means that many minimum wage workers will see significantly larger pay checks, too many workers will not reap the benefits of this new legislation due to underhanded and illegal business practices known collectively as wage theft. 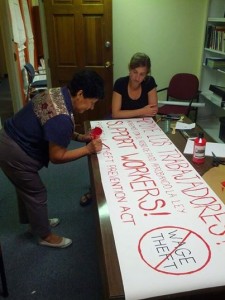 Wage theft is any action — or inaction — an employer takes that deprives an employee of compensation. Wage theft includes denying workers overtime compensation, withholding or delaying payment, or refusing to fully reimburse workers. For instance, Maria Hernandez was hired to clean a school the day before classes were set to begin. Testifying before the DC Council on March 14, 2014 Maria said:

“We worked for 16 hours straight, and once we finished working — tired, frustrated — they refused to pay us for what we had worked.”

Maria’s story is tragic, but sadly, it is also far too common. Mario de la Cruz testified that he is owed about $5,000 for 34 days of work. Maria Sandoval spoke about how she was made to work for over a month without getting paid. Samuel Abutair discussed how he was fired without being paid, and that the employer had done this to four other workers as well.

Sadly, wage theft is a wide spread problem in the nation’s capital. A report by the Progressive States Network gave the District an F for inadequate safeguards against the practice. While wage theft affects workers of all income levels, it is most common — and its effects most damaging — among low wage and minimum wage workers. This is why many of the same people who successfully pushed for an increase in the District’s minimum wage are also pushing for passage of the Wage Theft Prevention Act of 2014, which is set for its final vote at the DC Council on July 14th.

The Act gives workers the ability to hold their employers accountable for wage theft. Currently, the Office of Wage Hour (the office tasked with handling wage disputes) can’t ensure that employers even respond to claims of wage theft, let alone enforce rulings in favor of workers. This bill creates mechanisms that allow the Office of Wage Hour to hold perpetrators of wage theft accountable while ensuring that the whole process is faster, more efficient and more transparent.

The fact is, if robust anti-wage theft legislation doesn’t pass the DC Council, the minimum wage victory may turn out to be a hollow one for far too many workers. Therefore, the Employment Justice Center, with the DC Wage Theft Coalition, urges the DC Council to pass the Wage Theft Prevention Act on July 14th. We all need to ensure that the recent gains made for workers are actually available to working people in our community.