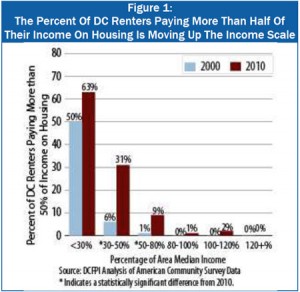 But it now raises the question:  How should we use those funds? As substantial as $100 million is, it is not enough to meet the full range of affordable housing needs in DC.

As a starting point, the District should target the dollars on families that need the most help. In addition to homeless families and individuals, assistance should focus on the large number of households with severe housing burdens ‘ those paying more than half of their income on housing. And generally this means low- and moderate income families, those with incomes below 80 percent of the area median.

These are the working poor or families living on fixed incomes who have very little left over each month for basic necessities after paying the rent. Severely burdened low-income households spend less each month on food, clothing, savings and transportation than their unburdened counterparts. Many of these families are one economic shock ‘ such as a job loss ‘ away from being homeless. 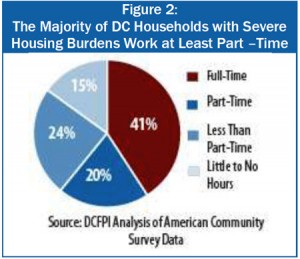 Targeting housing assistance this way will help bridge the gap between housing costs in DC and the low wages than many jobs in DC pay.  The majority of renters with severe housing burdens work, with two-fifths working full-time (see Figure 2).  For several of the most frequently held jobs in DC ‘ such as those that work as janitors, security guards, and cashiers ‘ low-wages do not pay enough to afford the fair market rent for a two-bedroom apartment in the District.  And housing costs have grown far faster than incomes for most DC residents.

Stay tuned to the District Dime in the coming weeks for more thoughts on getting the most out of Mayor Gray’s $100 million housing commitment.