The report, “High and Wide: Income Inequality Gap in the District One of the Biggest in the U.S.,” uses recent data from the U.S. Census Bureau American Community Survey to examine the income distributions of the 50 largest U.S. cities.

Some major findings of the report include:

The average income for the District’s top 5 percent of households is now over half a million dollars, the highest among large U.S. cities.“¯In 2011, the 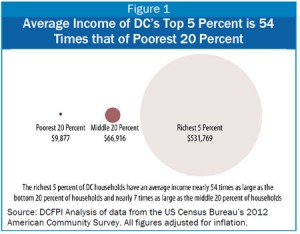 Closing the gap requires the District to create new opportunities to help residents get the skills they need to compete for jobs. It also requires steps to make work pay, building off the recent increase in the minimum wage. This includes recommendations from the District’s Tax Commission, such as raising the personal exemption and standard deduction in the income tax and expanding the Earned Income Tax Credit, which would help low-wage workers take home more of what they earn.

Investments in education and job training could help our workforce be better prepared for the higher wage employment opportunities. Finally, the District can help alleviate the high costs of living for residents who are barely making it, including making budget choices to expand affordable housing opportunities.

To read a copy of the report, click here.