The District’s economy and tax collections are doing better than projections in December, according to the Office of Chief Financial Officer’s (OCFO) February 26 revenue forecast. But financial challenges remain and will continue this year and next, as the pandemic continues to devastate our public health, the financial security of many of our city’s residents, key sectors of our economy, and our education system. DC’s ability to respond to these demands remains fragile, even with a large surplus for Fiscal Year (FY) 2020, which ended in September. Revenues are projected to be more than $235 million below what is needed to balance the current four-year FY 2021-2024 financial plan, and revenues are still projected to be more than $2.3 billion below pre-pandemic levels through FY 2024 (Figure 1).

The District has a long way to go to find the resources needed to address the ongoing damage and suffering caused by the pandemic, and to put DC on a path for a just recovery that addresses longstanding racial inequities exacerbated by the pandemic. While the Biden Administration pandemic plan, if passed, could provide more than $2 billion in short-term assistance to DC, that support is uncertain. The Mayor and Council need to take assertive steps to protect residents and small businesses most harmed by the pandemic, such as using more of DC’s reserves and raising revenues from DC’s wealthiest residents, as we outlined recently. Failure to do so will add to the challenges faced by people struggling to pay rent and put food on the table, slow down the city’s recovery from the pandemic, and widen racial inequities. 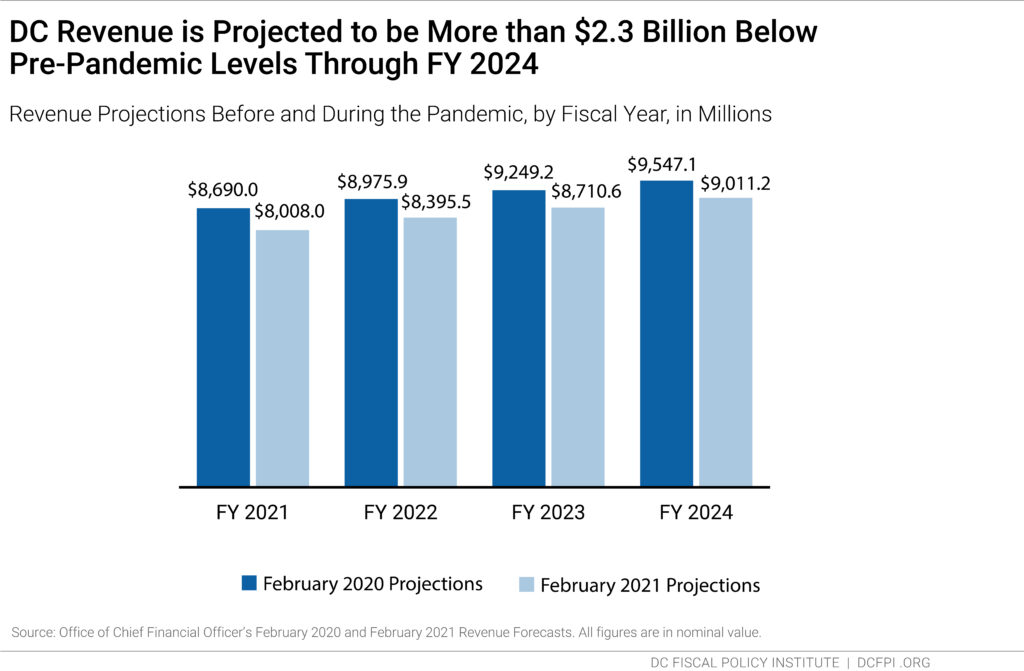 Putting the Forecast into Context

The forecast shows that the current FY 2021 budget is projected to be nearly $30 million out of balance by the end of the fiscal year in September (Figure 2). Lawmakers must rectify the deficit before the fiscal year ends. The Mayor will put forward ideas on how to tackle the deficit in an FY 2021 supplemental budget next month at the same time that she proposes her FY 2022-2025 budget. DC government agencies started cutting funds for vital services, such as homeless services, last fall in anticipation of a revenue shortfall, but it is possible that the Mayor will relax some of the planned cuts given that the most recent revenue projections are higher than what was expected in September and December.

The FY 2022 DC budget will be one of the most important budgets in DC’s history. Unfortunately, the approved four-year financial plan already called for a $260 million reduction in spending in FY 2022, compared to the approved FY 2021 budget, adjusting for inflation. On top of this already-approved reduction, the forecast now projects a budget deficit of $95 million for FY 2022 and another $110 million over the next two fiscal years. Taken together, this means the local fund budget outlook for FY 2022 could require budgeting hundreds of millions less than levels in the approved FY 2021 budget. That would be a significant drop in one of the most consequential budget years we’ve faced in a long time.

With that said, the OCFO projects that revenues will grow each subsequent year between FY 2022 and FY 2025, just not as much as previously expected in the summer given that the virus continues to spread, threatening lives and weakening our economy.

On the positive side, the annual audit showed that the District ended the 2020 fiscal year in September with a $526 million surplus. DC’s Chief Financial Officer (CFO) Jeffrey DeWitt pointed to support from the federal government and unexpected increases in income tax and property tax revenues as reasons that the District was able to end the fiscal year with a surplus.

The surplus is enough to cover the projected $235 million budget deficit in the four-year financial plan with some leftover. However, unless the Mayor decides to tap this surplus to help balance the budget, this money will automatically go to bolster the Housing Production Trust Fund (HPTF), the District’s primary affordable housing tool, and the Pay-As-You-Go (PAYGO) Capital Account, a source of funding intended to offset long-term bond borrowing costs for capital projects. Law requires surpluses to be split between these two accounts, after filling the District’s four reserve accounts, which the District achieved.

While the District should continue to make steady investments in public infrastructure and production of affordable housing, lawmakers should prioritize meeting human needs, including ending homelessness and preventing eviction. The Mayor and Council can do this while also maintaining steady funding in the HPTF.

This surplus isn’t enough to fully mitigate the city’s financial challenges over the next few years given the thousands of residents facing eviction, the small businesses that may not recover, residents struggling with food insecurity, and students who have fallen behind. DC needs a budget that focuses on racial equity. The city’s racial inequities were widening before the pandemic and have continued to worsen over the last year. The harm of the pandemic has fallen heavily on Black and brown residents, while many white residents have kept their jobs and seen their investments grow in value. DC policymakers must recognize that investments to undo the racial harm of the pandemic could take many years, and that the FY 2022 budget should be used to address long-standing inequities in income, wealth, jobs, education, and health.

The FY 2022 budget should tackle the immediate and long-term challenges together. Lawmakers should direct any additional federal relief funds to addressing the challenges created by the pandemic. They can do so by providing rent relief to prevent evictions, helping small businesses, and reversing learning loss. Because it will take several years to recover from the economic harm of the pandemic, the District should spread funds between FY 2022 and FY 2023. These federal funds may not be enough and are only a short-term solution. The Mayor and Council should fill any short-term gaps by using more of the $1.2 billion in reserves, including changing rules to ensure that they can be used for a rainy day, and raising taxes on high income people given the richest 20 percent of residents pay less in taxes as a share of income than the bottom 80 percent.

Amassing a half-billion dollar surplus—and being reluctant to tap more of our reserves—during a pandemic that’s throwing tens of thousands of residents into financial distress is a sign that the OCFO is taking an overly cautious approach to fiscal management and revenue projections. The CFO’s conservative estimates lead to missed opportunities for more timely investments in services that help struggling residents and businesses during the most unequal recession in modern times. It is understandable that a CFO will be fiscally cautious; but DC also needs a CFO who thinks about using DC’s finances to address community needs, especially in a place where the CFO is independent of the city’s executive and legislature.

With Jeff Dewitt stepping down as CFO, the DC Council’s Committee on Business and Economic Development’s oversight hearing for this agency next week is an opportunity to call for the next CFO to be someone that sees the importance of striking a balance between sound tax and budget administration and using finances to help residents and small businesses in need.

The Mayor Should Invest in Programs that Boost Incomes and Health